This coming Wednesday, January 8th 2014, IDW brings us a new issue of The X-Files: Season 10! As someone that has already read the full issue and will be posting a full review early on the 8th, I can tell you that this one is VERY exciting.

The conspiracy oozes out of the pages like a perfectly stuffed cream puff... or, a dissolving shape shifter... Wow, that went weird real fast! But so does this issue. Be prepared for a new ride of secrets and past allies and enemies.

For a preview of the first pages of The X-Files: Season 10 - #8 "Being For The Benefit Of Mr. X", click here. Be warned of sensitive graphics and themes. 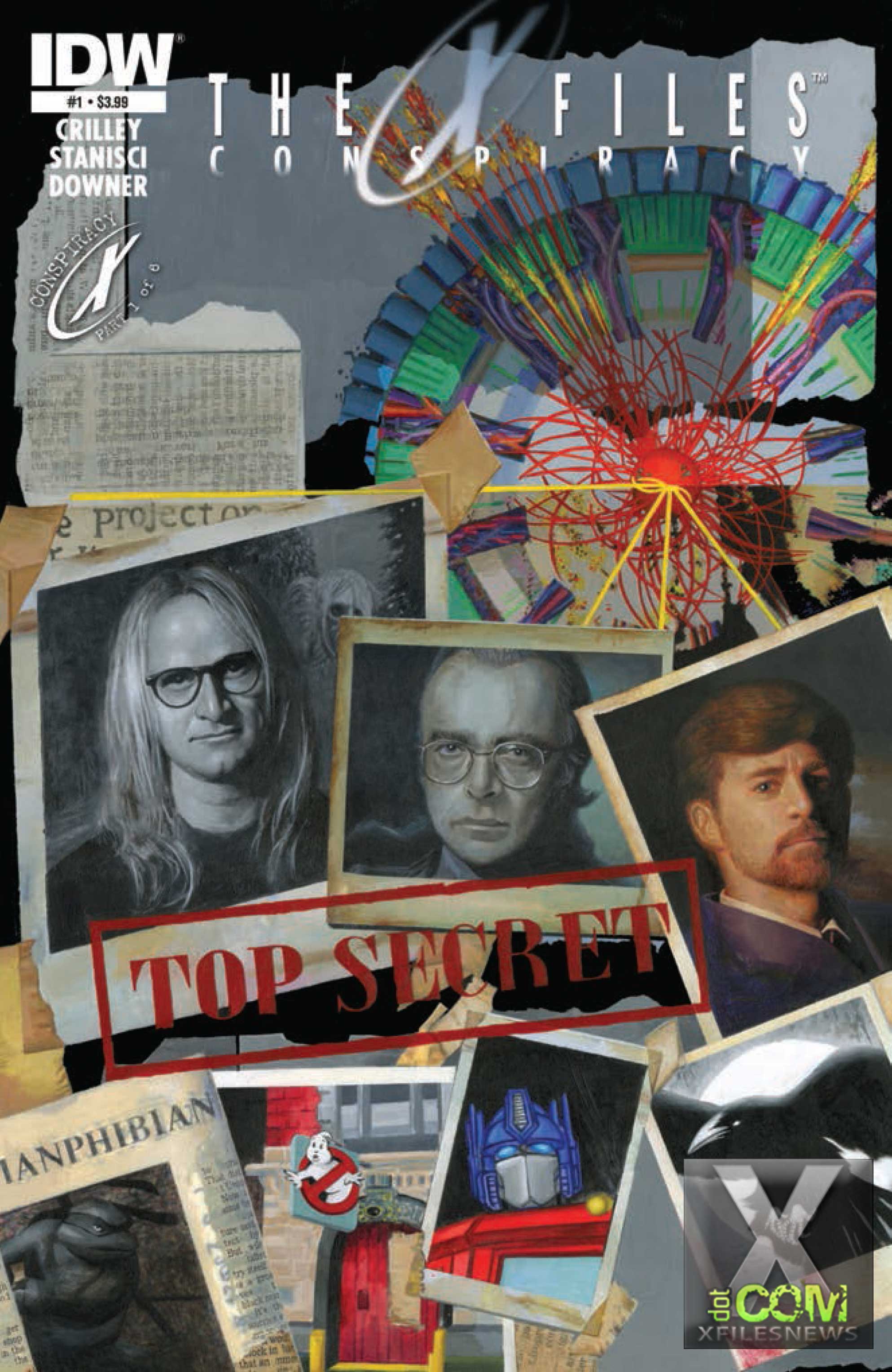 anuary 15th is the release date for the new set of crossover comics that IDW is about to launch. If you didn't know, The X-Files universe is about to collide, or mesh if you will, with the Ghostbusters, Teenage Mutant Ninja Turtles, The Crow and Transformers.

The first one is titled "Conspiracy #1" and you'll have our full review next week, but in the mean time here's a preview of the first few pages. Warning for some gruesome images included. 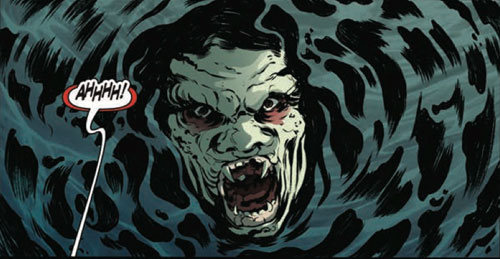 Chris Carter said it best when he claimed that no one really dies on The X-Files, unless you're Teena Mulder and even then, I'm sure I could find someone that could debate it, or Melissa Scully I could be opening a can of worms here.

The fact of the matter is that Flukeman is one of those ever-terrifying characters that you never forget, no matter how much you try, especially when you brush your teeth or think about your city's sewer system.

"Hosts" part two, concludes the storyline that began in issue #6, with Mulder and Scully back at the FBI and trying to close the books on stray cases such as the infamous Flukeman.

This installment begins by illustrating the backstory that Harris has conceived to explain the existence of our favorite humanoid parasite. Flukey's origins seem to date back to 1986, and the Chernobyl era in Ukraine; a worker is assigned to assist on a dangerous operation at the plant's sewer system, but is left to die, drowned by the nuclear waste. His body mutates with the flatworms present in the area and so the king of the mutant taeniae is born.

In present time, Mulder has been attacked by the mutant infestation that has swarmed Martha's Vineyard, but he manages to survive, assisted by the local sheriff. Mulder unknowingly saves the day, and he's nursed back to health by Scully, but the question still hangs in the air: is Flukey really dead this time?

For more details, go and pick up this issue from your local retailer or shop for an electronic copy at Comixology.

What called out to my attention was that this storyline reminded me a lot of the Black Oil storylines, including its presence in "Fight The Future", and also the style and structure of episodes such as "Agua Mala", "Brand X", "Deadalive" and "Tunguska"  partly because Scully is the ever knowing healer, but also because of that "grey feeling" that a lot of us identify as the Vancouver texture".

Whether or not this was intentional on Harris' part, he did a great job capturing the cloudiness and mood of those early season episodes. Scully's tone, as always, feels natural, and convalescent Mulder reminds me of his time in Triangle, while infused with a bit more of Duchovny's style. Casagrande and Califano brought very interesting visual language to this issue, and the colorists - Florean and Cuomo truly portrayed that early X-Files feel for me and it pleased me greatly.

I always make a brief comment about the cover art and I'm very pleased by this issue in that regard. Valenzuela's work delivers the mood and subtlety that we're used to getting every month, and I'm particularly happy with the shadow work that gives texture and mystery to the dark setting, instead of just a plain background. The work on the character's expressions is also quite refined. The second cover, by C.R. Wilson III, also presents us with great shadow and texture work, and actually reminds me of vintage circus signage art; I think it's fun and different. It makes me wonder: what if Flukey were part of the "Humbug" reality?

This issue delivered more effectively an extensive amount of information in comparison to the previous one, in my opinion, and perhaps a different level of maturity when it comes to how this theme was treated - I'm a sucker for vintage, sue me.

When it comes to how The X-Files: Season 10 has tackled continuing the X-Files universe, the series has its advocates and its opponents, we've talked about it before, and I can understand how it's hard to comply with reopening doors that were closed. In my previous review I mentioned that I approached this revisit to the Flukeman story with reserve, because is one of my favorite characters, and while I think it could be plausible for this story to exist in the X-Files world, and I'm satisfied with the peek into this possible scenario, but I wonder if it isn't time to see new monsters come visit this new opportunity we have to flesh out brand spanking new X-Files apart from any theme or topic that might have been previously presented in the original series and movies.

The X-Files: Season 10, #7  Hosts, Part 2 of 2 comes from Joe Harris' pen, and as always is Executive Produced by Chris Carter, with cover art by Carlos Valenzuela and Charles Paul Wilson III. Art by Elena Casagrande with Silvia Califano, colors by Arianna Florean with Azzurra M. Florean, and color assisted by Valentina Cuomo. Letters by Neil Uyetake and Gilberto Lazcano, and edited by Denton J. Tipton.

I have really fond memories of my first encounter with the Flukeman or as we lovingly call him, Flukie. To the regular people, like my mom, having endearing feelings over a humanoid flatworm would sound, lets say, outlandish, but not to the avid X-Files fan. Is not only the fact that we all have this kind of shared "guilt" over the fact that his sole existence relies on the aftermath of human kindâ€™s cruelty to Mother Earth, but also because it reminds us of a "simple" time, back when we were fresh faced about this show and just sinking our teeth into the marvelous universe that was The X-Files.

The first seasons of our beloved show seems like twenty years ago. Oh, wait. 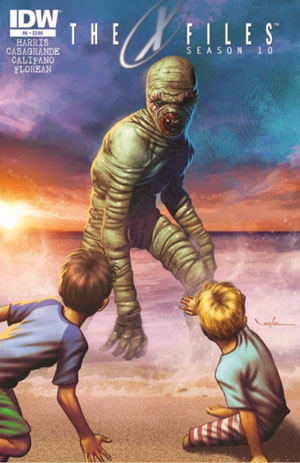 Having said that, with The X-Files: Season 10 comics taking a stab at this classic character, the natural reaction is to approach with caution, but also with an open mind.

Issue #6 is written by Joe Harris, featuring Art by Elena Casagrande and covers by Carlos Valenzuela and Menton3 and is the first part of two that will explore this storyline in a "Monster-of-the-Month" model that steps away from the conspiracy scheme.

Mulder and Scully have been reinstated to the FBI, an important step for them, especially when they have to walk down memory lane and figure out where they stand in this new situation. They come back to a now Deputy Director Skinner and their new direct supervisor, the clean cut Assistant Director Anna Morales.

Right away we can see the touch of Harris' pen when it comes to figuring out the current political landscape. His talent to navigate the Washington game shines through in quick lines and clever visual language and it serves as a great tool to mark the difference between the time we last saw Mulder and Scully at an FBI office in IWTB and today. 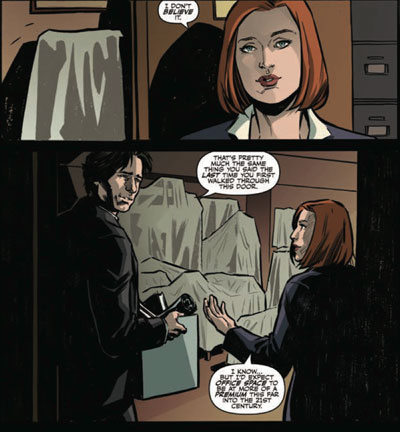 Morales has an interest in new and old X-Files that haven't been "close", a term that irks Mulder because traditionally an X-File is not a done deal. This is how the Flukeman case lands on their laps again. A series of disappearances have taken place in Martha's Vineyard, all showing the same characteristics of the previously documented attacks.

Scully examines the remains of the original Flukie in Quantico while Mulder visits the beach town and does some researching on his own. They discover more than a couple of alarming things: the amputated body of the parasite regenerates, springing the humanoid flatworm back to life on Scully's end and Mulder finds multiple victims with exit wounds that point out to their bodies being used as hosts. They've been stashed away and bound, suggesting that someone with more fine skills than a mutant may be involved.

It all gets even more complicated when Scully suggests that if the genetically altered flatworms have exited so many hosts, and they have such powers of regeneration, it could mean that there could be a LOT of flukies out there, leaving us with a creppy cliffhanger for the next part. 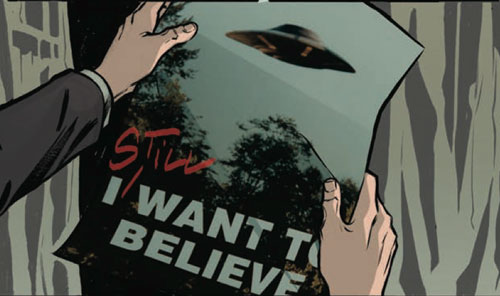 The previous issues have been criticized because they've brought back formerly "dead" characters, though I have to say that just like Mulder suggests, no one really said that Flukeman was gone for good. The first look into this storyline is almost crammed with information that ironically enough leaves you wishing that you could live in this universe a bit longer; it is a complicated transition as they get their bearings and rejoin the FBI, which was another controversial point of the cliffhanger the previous five-parter.

Regardless of you agreeing or not that they should be reinstated, it makes me wonder if it would have been preferable to have a transitional issue where we have a longer look at their return to the FBI. I'm a sucker for that bureau dynamic and I'm sure that Harris would have enjoyed it as well, based on his work on Great Pacific.

I liked the banter in this one, you can recognize that sober sarcasm that was part of Scully's sense of humor and much like the original episode, Mulder's curiosity is portrayed very well. I enjoyed Casagrande's work; definitely different from the previous issues and fitting with the change of mood, I particularly enjoyed the use of shadows on the sewer scenes. Valenzuela's cover art is great as always and I'm looking forward to seeing how this Monster-of-the-Month will resolve in issue #7.

The X-Files: Season 10 - Issue #6 is out in stores now. Pick up a copy at your nearest comic book shop, or download via Comixology. 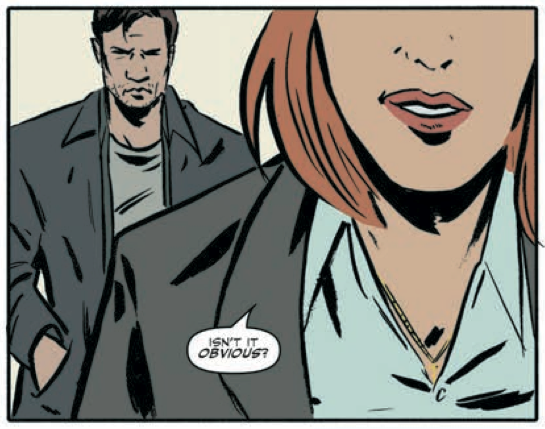 When the storyline for ''Believers'' started with the premiere issue of The X-Files: Season 10 comics, we knew that we were in for a wild ride. It's daunting, really daunting, to approach a subject matter such as the mythology of The X-Files.

The fifth issue came out today and with it the last episode of this particular story arc, but instead of giving closure to situations and wrapping everything up in a tight, pretty green bow, Joe Harris and Chris Carter have opened more than half a dozen doors to situations that promise to keep us entertained for a long time to come, leaving us salivating for more.