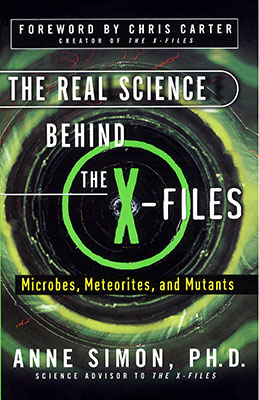 I had the occasion to meet Dr. Anne Simon, science advisor to The X-Files, when she came to the University of South Carolina on Monday, November 9th to give a talk on ribosome recoding in RNA viruses. I once used “The Post-Modern Prometheus” as a study guide for a Developmental Neurobiology course, so my comprehension of her talk was, at best, rudimentary. What I did understand was that she was delighted to be speaking to us, that she told an exciting story of the ways and workings of science and research, and that her facility for presenting hard data while engaging an audience is extremely important in science. Most of all, I learned that she truly loves her work—her science work and her “side-gig” as science advisor for The X-Files.

Mulder might say that Anne was fated to stay in South Carolina for an extra 12 hours to give a second talk, this one on The Real Science of The X-Files (she actually had a later-than-anticipated flight home); for that is what she did. Thus, I had another wonderful X-Files experience at her second lecture, but let me start at the beginning.

With The X Files phenomenon hitting fever pitch in the 90’s, it was a great decade for the X-Philes fan base. From starting as a small but dedicated few, who discussed all aspects with each other and the producers online in a pre-social media world, to becoming a mass mainstream band of brothers, we grew as big as Trekkies and influenced the commercial appeal of geekdom.

But after the series ended in 2002, it seemed that only the small cult following that began nine years earlier were remaining, with the shows legacy somewhat tarnished by low ratings, cast changes, and the series in general running out of steam.

Yes, the excitement is there for the revival and we’re finally getting what we deserve, but only after 13 years long and difficult years.

Therefore, I present to you a few reasons why we really are a patient lot…

Hit the jump for 9 Reasons Why the X-Philes Deserves the Award for ‘Most Outstanding Patience of a Cult Fan Base.’

While The X Files deserves plaudits for the way it helped redefine television drama, I do believe that not enough praise is injected towards the man behind the phenomenon, Chris Carter.

Taking influence from childhood shows such as Kolchak: The Night Stalker, during the 90’s with a blend of Carter’s huge vision and a tightknit team, The X-Files went from a potentially lame and silly concept, to an intelligent piece of television that has influenced contemporary programmes.

Another influential show that Carter credits is The Twilight Zone, which comes as no surprise as they both share a similar style and even certain plots. In many ways, The X-Files is an anthology show but with regular characters who come in and attempt to make sense of the situation. But it wasn’t just the show itself; the man behind The Twilight Zone, Rod Serling, is regularly cited as influence by many screenwriters, with Carter being one of them.

There are many comparisons to their work; instead of big, fantastical, space-opera ideas with bug-eyed monsters and cheesy characters, both Carter and Serling use the science fiction and fantasy genres as an allegory for the social and political elements of everyday life. The majority of episodes of both shows are set on Earth, in everyday settings and reflect the eras in which they first aired. The Twilight Zone caught the 50’s and early 60’s post World War 2 mind-set, with many episodes depicting war heroes and criminals trying to make sense of a world with such a tumultuous past and uncertain future. Furthermore, Serling used the genre to portray his strong views on prejudice with many episodes overtly depicting bigotry, albeit always subliminally and through a science fiction context. Similarly, Carter caught the psyche of generation X’s interest in extra-terrestrial life, lack of trust in the government and spirituality through The X-Files, both in the stand alone episodes and in particular, the mythology arc.

Carter’s influence helped The X-Files become more than just a TV show and this is similar to Serling’s televisual impact with The Twilight Zone half a century ago. What must be remembered is that Serling was writing for television in its early years and helped make it an art form when many considered it a ‘mediocre’ medium. While Carter helped redefine television, it’s fair to say that Serling defined it. Unfortunately, it would be many years before those such as Carter would take his influence into a new generation.

Perhaps Carter’s biggest influence to contemporary television, unlike Serling, was the new concept of a big mythology arc, something that had never been done before on television. Yes, television had many serialised shows, but never had one attempted to keep its audience hooked with a big story arc that had many strands mixed in alongside stand-alone episodes. While Carter’s success with the mythology arc is regularly debated, many forget that this was new to television, with The X-Files becoming a pioneer. Without it, we probably wouldn’t have high concept shows such as Lost or Fringe, to name but a few.

Another aspect that links Carter and Serling is that their legacy is defined by one influential show and a modest follow up. Carter’s series Millennium is by no means completely unknown, indeed it has a cult following too, with many campaigning for a feature length follow up. Set in premillennial America, unlike The-X Files, the series looks at the most wicked evil of all, serial killers. The heightened sense of reality of generation X’s pre-millennial panic is seen through the shows disturbing imagery symbolising the antagonists as monsters; a trope seen in the current Hannibal TV series. Millennium proved to be simply too subversive for its audience and despite hanging by a thread to the schedules it managed three seasons and ended with a cross-over episode of The X-Files in season seven. Although a modest success due to different factors, Serling’s Night Gallery also failed to impact viewers and was seen as inferior to The Twilight Zone. In many ways, The X-Files is Carter’s Twilight Zone, while Millennium is his Night Gallery.

Successes like The Twilight Zone and The X-Files are too huge to be replicated, but in many ways it’s a shame that both Carter and Serling’s other works aren’t held with as much esteem. The X-Files was ground-breaking, and it still holds up well compared to contemporary television and this is due to Carter’s brave experimentation of the medium, also seen in his short-lived series Harsh Realm, which was set in a virtual reality with soldiers trying desperately to escape back to the real world. The plot is similar to a number of Twilight Zone plots, particularly the pilot episode, "Where is Everybody?" However, it could be said that both Millennium and Harsh Realm were simply ahead of their time. Carter was working on a primetime network that needed to attract a mainstream audience. As the recent cancellation of Hannibal proves, primetime is not necessarily the place to be subversive or experimental and if Millennium were made today, it would probably be aired on HBO or even Netflix. As for Harsh Realm, it’s hard-core science fiction concepts would perhaps have attracted an audience on the Sci-fi channel had it aired four or five years later.

Many often lambast Carter as a screenwriter and showrunner; the term ‘Chris Carter effect’ is used to describe those whose TV mythology arcs become so tangled, they eventually lose their audience. But whatever people’s opinions are, no one can deny his imagination and concepts have made a huge impact on television. And if the two X-Files movies prove anything, Carter’s talent as a screenwriter could easily transpire to a lucrative film career. Fight the Future is by definition a ‘blockbuster’ but has an intelligent story and characters that have as much substance as the images and special effects. And 2008’s I Want to Believe is by no means a terrible film; the plot is interesting and well directed, but it’s simply not The X-Files movie fans wanted.

Although Carter hasn’t been as prolific since the 90’s, with various projects failing to take off such as the Amazon Prime series The After, hopefully by returning to the franchise that made his name, Carter will once again prove himself as a masterful storyteller and begin a second phase of his career.

Only time will tell, but let’s not forget Rod Serling, whose legacy remains as strong and influential as it’s ever been, forty years after his death. Both men were experimenters of the genre and medium, never spoon-feeding the audience and always making you question reality and fantasy; both introduced elements that have influenced contemporary TV. Whether their executions were consistently successful is debated, and maybe some audience members don’t want to be challenged, but it can’t be argued that the two men made great leaps for television.

However the revival pans out, Carter’s legacy and influence as a television great is already set in stone.

Why Mulder and Scully Not Living Together is Actually a Good Thing, For Now

“We can tell you that they’re not living together…” are words that nearly broke every shipper’s heart upon reading the spread about The X-Files Revival in EW. However, know that this is not as bad as you may think. In fact, look for consolation in “frustrated lovers Mulder and Scully” a couple of lines before. Why? Because this does not mean they are not seeing each other.

Let’s take a step back and review why not living together, may truly be the best thing for their successful future as a couple.

First and foremost, let me introduce myself to you. My name is Joselyn Rojas, medical doctor by profession, extreme phile by passion, known in the philedom as @JossaDosBichos. The purpose of the #XFScienceSundays segment is to rewatch selected episodes from The X-Files analyzing them in regards to specific aspects of science – physics, chemistry, biology and medicine – and discuss possible explanations for the events shown there.