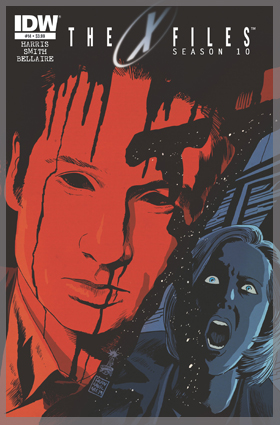 I know, I know. I'm about a month late on this review - blame it on SDCC hangover. I was not shying away from reviewing this issue, believe me, I was actually very keen to do it because it provoked quite an interesting reaction from parts of the fandom since the previews came through the grapevine.

I'm excited to address some, if not all, of the talked about topics, but first, on to the basics. A spoiler-filled review and further opinions after the jump.

In “The X-Files: Year Zero”, our heroes are once again on the case, this time hot on the tail (hehe) of a shape-shifting cat. Or is it human? In this case, it’s a black leopard, but either way, it provides for some classic Mulder and Scully banter, leads us all the way back to 1946, and introduces us to some just as lovable new agents, Bing Ellison and Humility Ohio.

Year Zero is sure to satisfy both Philes and new readers alike. This issue, written true to character by Karl Kesel, is a solid first outing and well worth the read.

Take the jump and read on for the full spoilerific review:

Written by Joe Harris, Pilgrims, Part 3 continues the storyline carried by its two predecessors. Last time, Scully disappeared from the middle of the desert; now, she has returned, to Arlington… with Alex Krycek in tow.

The former FBI agent and double-crossing rat boy is nothing but confused by his own presence in this world, and seems to have no memory of various moments of his previous existence. The Lone Gunmen do their best to analyze him, detecting abnormal brain activity that seems to hide a code, discoverable thanks to a retired NSA master decryption software.

Meanwhile, back in Saudi Arabia, Mulder hitches a ride in the middle of the desert on a truck driven by a suspicious woman that happens to be infected with the Black Oil virus. She reveals that he’s being followed and is the object of a hunt for what they’ve always wanted. This encounter, well, let’s just say it doesn’t end up well for our favorite hero.

Scully seems quite confused about the reasons behind her own “relocation”, and after getting as far as she can with the Lone Gunmen’s help, she seeks Skinner’s aid. From him, she learns that Mulder is on his way back to the US and Skinner agrees to keep a guard on Krycek, even though he doesn’t quite understand how the man that almost killed him, and that he shot between the eyes himself, is now standing in his own living room.

Back at home, Scully reflects on her own confusing situation; she has many questions without answers about her recent abduction, and William’s and Mulder’s whereabouts. The reasoning behind these events points to frightening possibilities that she’s not scared to delve into in her search for the truth.

Mulder flies back to the US, with CSM’s sinister presence following close, all the while hiding a terrible truth. As he tries to appease Scully’s shock and fear about his sudden disappearance and the unclear circumstances of his return, we learn that he now carries the black oil within.

All in all, more questions are raised on a road filled with twists and turns that are going deeper into the mythology.

Art wise this issue doesn’t disappoint. Matthew Dow Smith continues the dark tone and mood, setting and carrying the story swiftly and enriching the narrative. Jordie Bellaire does a fantastic job as always complementing the work.

The covers this time around include a Scully photo from “The Sixth Extinction” episode for the Subscription cover, and two with original artwork; a cool and classic take on the Lone Gunmen by Francesco Francavilla for the Regular cover and my favorite, the Retailer’s Incentive cover by Mark McHaley, a quite masterful take on a Scully portrait.

This mythology multi-parter has covered a lot of story in three issues, most of it raising questions and promising to expand the scope of the actual threats of the syndicate, and the alien involvement behind it all. It is no longer a localized game, no longer an American, or mostly American issue… the players are diverse, the interests equally complex. The methods used to extend their tendrils have become more intricate and it makes you wonder about the magnitude of the scope of it all. Will there ever be a way to contain and understand the game that’s being played under wraps? Are Mulder and Scully being naive about what can be done when they finally, or if they ever, find the truth? What is the one thing that has proven to be so essential that Mulder continues to be such an important piece in this chess game? And then, with William still missing from the picture, how has Mulder’s quest and the new developments affected the boy’s role in this grand adventure? 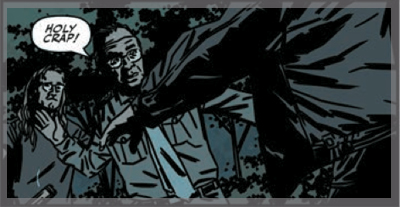 I have a couple of comments about the storyline of this issue and of the character details, specifically for Scully. I want to make clear, this doesn’t mean that the story loses any integrity because of it, at least in my opinion, but I need to bring them up.

One of the details that bothered me was Scully’s comment that she wasn’t a Neurologist, only that’s not an accurate statement. In IWTB she treated a case that was highly related to neurological matters, in fact she performed brain surgery. I’m not going to bring up the methods that she used to research in that opportunity, or that perhaps that she wouldn’t necessarily have to be completely familiarized with what they detect in Krycek’s brain examinations, but perhaps this wasn’t the most accurate statement on her part about the scope of her abilities. Maybe I’m being nitpicky about it, but it jumped at me.

I also wished that Scully would have been more active about her reaction to the events surrounding her abduction, Krycek’s reappearance, and Mulder’s return. Even though she has traditionally been level-headed and rational, she seems too passive and cryptic about it all. You could make the argument that it’s because she’s so rattled by the nature of what’s going on, and being coy is her reaction to an unsure footing, but I still feel that she’s too meditative about it. It left me desiring for her to be more proactive, not so cautious; even when finding one truth may lead to another, her first priority in any conversation should have been to find a way to locate Mulder… before any other interest. This was not the case. It was the second order of business in most exchanges. They’ve come a long way about expressing their need to be with each other, the importance each of them hold in this quest, the dangers they face, and the transcendence of their relationship for her to sit tight at home.

But to each writer, I owe the respect of how they want to tell the tale.

Next issue promises to tackle the issue of Mulder’s contagion, and perhaps we’ll see how CSM’s presence plays a role now that he’s following closely. I can’t wait for the next installment.

The X-Files: Season 10, #12 â€œPilgrims, part 2â€ is here. This is the kind of issue that makes me wish that we could have two of them per month for this series as the cliffhanger was so effective that I cannot wait for the next one.

The current May issue is the second of the five-part mythology-centered storyline that delves into the core of the grand conspiracy that Harris has developed along with Carterâ€™s input. There are many things that are great about this second issue which continues through with the thick setup laid out in the previous issue and picks up on the groundwork presented in the first issues of this series. 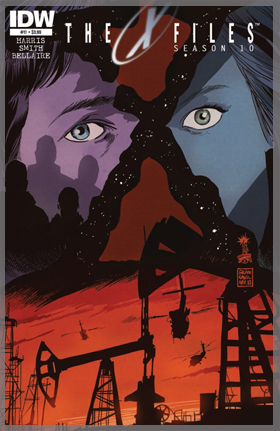 I feel like it's been forever since I last read an issue of the Season 10 comics, but in reality, it hasn't been that long, right?

April was a very generous month for X-Files comics, not only did we have the release of The X-Files Annual 2014 but also the hardcover version of The X-Files: Season 10 - Volume 2.

The eleventh issue of The X-Files: Season 10, titled "Pilgrims - Part 1" starts a five-parter that will deliver the newest chapter in the mythology being developed in these comics.