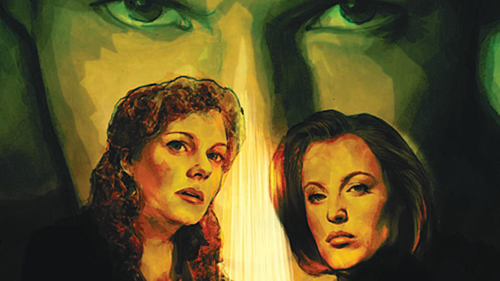 Throughout March, a number of IDW comics titles are releasing one-shot comics under the umbrella, “Deviations.” These titles explore alternative universes in which a single, fundamental change has occurred from the reality we all know: what if the Ghostbusters never crossed the streams? What if COBRA finally won against G.I. JOE? The X-Files is another of the titles joining in the "Deviations" fun, with “Time and Being” exploring a world in which Fox Mulder was abducted instead of Samantha. Read after the jump for our full review.

“Time and Being” is an interesting concept for an X-Files alternative universe as it changes one of the most fundamental aspects of the show’s reality. The story focuses on Samantha Mulder and Scully’s first meeting when Scully is assigned to the X-Files division at the FBI. To the author’s credit, this is not a simple re-write of the TV show pilot, although there are some definite nods to that, especially during their first meeting down in the basement. Instead, their first case together sees them investigate a series of missing teenagers who have vanished over the last 20 years.

The investigation goes well, if apparently unfruitfuly, until they reach the very last house which Samantha soon reveals was her childhood home. At this point we get yet another flashback to the night of November 23rd, 1973, but with a significant twist. Rather than having Fox’s abduction play out exactly the same as Samantha’s, it begins in exactly the same way as we have seen multiple times before: the Stratego game, the blinding white light, Samantha floating in mid air by the window. However, this time, when she cries out for help, Fox isn’t frozen and instead grabs hold of her and gets her to hide under the bed. When she opens her eyes, the light, and her brother, are gone. It’s a tragic little twist, Mulder finally gets to save his sister that night - the thing he has been beating himself up over for decades come the original series - but only at enormous cost to himself.

After Samantha is finished recounting her story to Scully, the pair spot a shady figure standing in the garden of the old Mulder house. They chase him into the woods but lose him in the dark. Sitting on a log (what is it with meaningful conversation on logs this year?), Samantha admits that she’s glad to have come back to her old house and that she thinks she’s “going to enjoy working with.. Dana”. 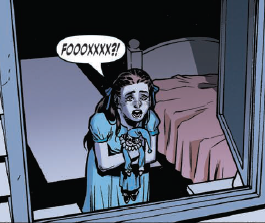 The story ends on a final twist, in which the identity of the shadowy figure is revealed. Although not much of a surprise in and of itself (a lanky guy who’s about 6ft tall and a runner - now who could that be?) what is not as expected is the revelation of who is waiting for him on the other side of the woods. The final pages suggest that Fox, like Samantha, was raised by the Smoking Man, only he lived to adulthood. Whether or not he is now working with Spender is unclear, but they are clearly close enough to have tailed the two agents to the old house together. This scene alone is more than enough for me to want this issue expanded into another mini-series rather than a single one-shot issue.

Although really enjoyable, I felt that the story was often somewhat rushed, even though there wasn’t a huge amount of it to begin with. Samantha literally opens her first conversation with Scully by asking her if she “believes in extraterrestrials”, and within a single page, they’re already in a car and off investigating. There’s none of the gentle, introductory banter that made the original meeting scene on TV 24 years ago so memorable - instead, we get, “believe in aliens? No? Let’s go investigate some missing kids” all in the space of a breath, and the pairing loses something in that.

Scully also felt completely out of character at times. As much as this is meant to be an alternate universe and thus some leeway on characters has to be given, having a newbie FBI agent shout “what? Are you serious?” in the face of the director (apparently in this AU Blevins got himself a promotion) makes her sound like a petulant teenager rather than the 28-year-old woman she is at this point. Not to mention that such behavior would probably result in her facing disciplinary action if this were reality! She’s not the only one acting this way either. In the few pages where we see the adult Fox, he too comes across as a petulant teen, turning to the Smoking Man with a disdainful, “stop lecturing me. You’re not my dad.” Not exactly what you’d expect to hear from a 30-year-old man.

It’s also great to see an X-Files comic created by a nearly all-female team, with the story, illustration, and colors all done by women. Overall, I really enjoyed this one-shot, and would love to read more from the same universe. Is Fox really working for the Smoking Man? Will Samantha and Dana end up investigating the same cases that we saw on the show or different ones? Will she and Sam develop the same bond over the years, perhaps even a romance? Or perhaps could things get twisted up even more by having Dana develop the same connection she has to Fox, even though he works for the Syndicate? The possibilities are endless.