Jimmy is slippin’ but Mike’s holding strong. For now. Though both characters are straddling the fence between good and evil, this week’s episode focused more on Mike, giving us a deeper understanding of what makes him tick and leaving us to wonder what final straw will make him break bad.

Hit the jump for the full recap of episode 4, “Gloves Off.”

This week we open on Mike, trudging home after a long night. He throws down a big pile of cash, the rewards of his job, and grabs a beer. Reaching into the freezer he grabs some frozen carrots and holds them to his head while he shuffles to the couch. Does he have a headache? Mike looks a little worse for wear. He leans back on the chair and removes the frozen vegetables. Mike is a lot worse for wear.  His face looks like it met a meat grinder.

At Davis and Main, Jimmy is trying to justify his rogue ad campaign to the partners. He’s selling the ad hard making some decent points but ultimately failing to win any ground. Jimmy was never one to abide by social niceties or pander for respectability and he can’t understand why they aren’t falling at his feet in praise. But the partners are more concerned about their reputation than any one case and no amount of calls in response to the ad will soothe them. Jimmy’s ultimately not fired and is left with a warning: He’s just made strike one and two, one more screw up and he’s out.

He quickly calls Kim to do a little damage control but it’s too late. She’s in a meeting with Howard, taking a whole steaming pile of heat on Jimmy’s behalf. It ends in her demotion where she’s relegated to the basement on document review. Judgey McJudgerson (Chuck) looks on with scorn as this dressing down takes place. The writers have done a brilliant job in making me swing from feeling sorry for the man to loathing his every breath. 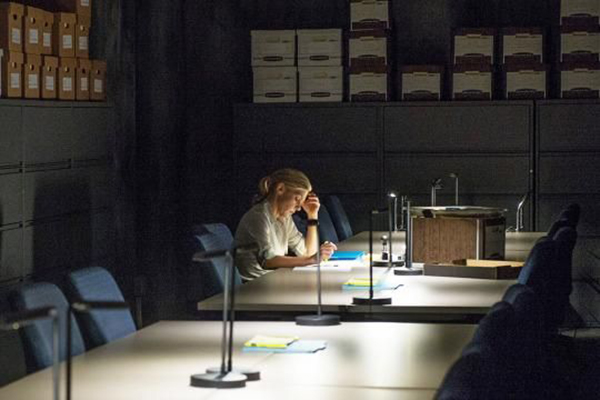 We catch up with Mike and his face is perfectly healthy looking. We learn our opener was a teaser of what’s to come. Nacho and Mike are meeting to discuss Nacho’s plan and it’s a doozy. He wants to kill his boss, Tuco.  He claims Tuco is too hopped up on meth to be trusted, that he’s dangerous. Kill or be killed.

It takes a fair amount of convincing but Mike agrees to “look into it.”

Killing someone in cold blood obviously isn’t sitting well with Mike but he needs the money to situate his granddaughter and her mom in a new home.

Back at HHM, Jimmy weasels his way into the building and not finding her in her office, finally finds Kim in the basement. Understandably, she’s mad and seems a little bit broken. Jimmy apologizes and offers to go to bat on her behalf, but Kim vehemently opposes that plan. If Jimmy goes to Howard, they are over. Jimmy is surprised they are still on after the stunt he pulled. With a final apology, Jimmy leaves.

And goes straight to Chuck’s to beg for Kim’s reinstatement. Ugh! Jimmy! Why? Why must he ruin everything with Kim? My Titanic of a ‘ship seems to have already hit the ‘berg.

In Jimmy’s mind, going to Chuck is nothing like going to Howard. I fear Kimmy won’t be so inclined to agree.

Jimmy finds Chuck shivering and swaddled in his space blanket. The man’s a mess. Jimmy’s face transforms from anger to compassion as he wraps Chuck in another blanket and keeps watch all night. It’s these moments that make us love Jimmy. Despite all his stupid decisions and narcissistic tendencies, at least for now, deep down he’s a good guy. 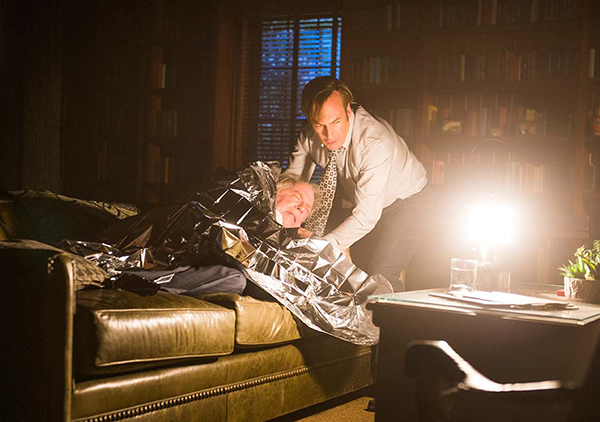 Meanwhile, Mike is looking to buy a gun. In a great little scene where almost nothing happens, we learn that Mike isn’t quite ready to pull the trigger. Literally. In a lengthy and gentlemanly negotiation, Mike decides not to buy a gun and we learn he might have served in Vietnam. 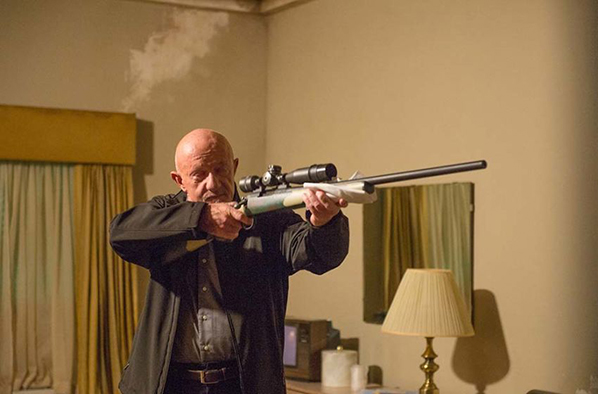 The next morning, Jimmy pleads with Chuck to save Kim’s bacon. He explains that she didn’t tell Howard to protect him. Chuck points out that it was still her fault for trusting Jimmy in the first place. Ouch.

Jimmy will do anything to save Kim, and in possibly his most impassioned speech yet, offers to quit the law altogether for her. It’s the offer of Chuck’s dreams, but he doesn’t take Jimmy’s bait, opting to take the higher ground. Chuck equates Jimmy to an alcoholic with his tendency to take the most devious and underhanded approach. Chuck then dismisses Jimmy with a warning that he’ll be late for work. It’s pretty clear Chuck doesn’t need to do anything to ruin Jimmy’s career, he’s doing a mighty fine job of that himself.

At the restaurant, Tuco and Nacho finish up a drug deal. Tuco is not quite all right, as Nacho had warned. Clearly his new meth habit is affecting him. Outside, Mike calls the police and reports a fight involving a gun outside of the hole-in-the-wall taco joint.  His plan set into motion, he hops into his car for the short trip over to the restaurant.

Round two involves hitting Tuco’s car. Tuco loves his car and this can’t end well. Mike ambles into the restaurant with not a care in the world.  Naturally, Tuco is not amused. 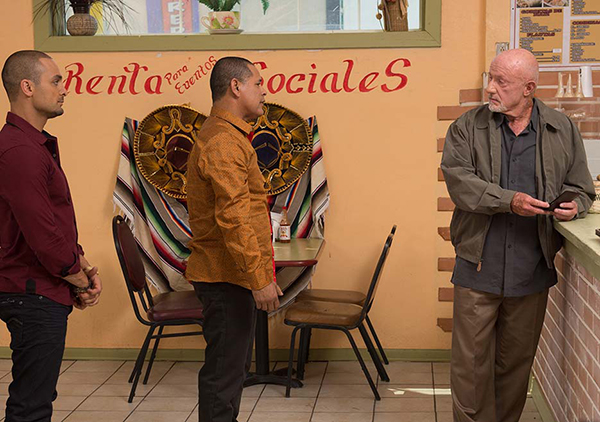 Tuco waits for him to pay his tab, tension mounting as Mike flashes a wad of cash as he pays.  Tuco follows him outside and points out the damage. There’s barely a scratch but hopped up on meth and wronged, Tuco is in no forgiving mood.

“That’ll buff right out,” Mike says, in his most oblivious tone of voice. Tuco demands the cash in his wallet. Mike buys time, offering his insurance details, claiming he has no money, before finally, ever so slowly admitting he does. He reaches for his wallet and punches Tuco in the face with it. Game on!

Tuco slugs him over and over again before pulling out his gun. Mike easily knocks it out of his hands and the gun skitters under his car.  Mike grabs Tuco’s jacket with one hand, and the pole behind him with the other, and holds on tight. Taking blow after blow, and spitting up blood, Mike waits for the cavalry to arrive.

“That all ya got?” Mike wonders as the police pull up. One final blow, and it’s lights out for Mike.

When we next meet up with Mike, he’s meeting with Nacho to settle their debts for the job. "You went a long way to not pull that trigger. Why?" Nacho asks.

It would have been a lot less trouble and double the cash for Mike to just take Tuco out. To add further worries to Mike’s load, Tuco won’t be in jail forever and there’s a good chance he’ll come after Mike when he gets out. But Mike’s not letting his secrets slip, and he enigmatically walks off into the night to ice his mashed up face. The episode fades to black.