As a metaphor for the daily struggles we all face- trying to balance expectations, commitments, jobs, and family with our wildest dreams and wishful thinking, “Bali Ha’i”, the sixth episode of Better Call Saul is a solid and derisive look at modern life. Once again, Jimmy takes something of a backseat as Rhea Seahorn and Jonathan Banks are left to shine as Kim and Mike.

Hit the jump for the recap and review.

The episode opens at night with Jimmy tossing and turning, unable to find rest in his cushy new apartment. Bored, and tired of watching 90s ads for Chia Pets, the patriotic closing moment of a television station, CSPAN, and the bland new ad for Davis & Main, he begins a destructive little jaunt around the space, kicking decorative wicker balls around the house. It’s a slightly ridiculous scene but it emphasizes the trouble Jimmy has adhering to even the simplest of rules of a life on the up and up. All of this plays hilariously to the tune of “Sleep Walk”, and not being able to take it anymore, Jimmy runs to the one place he feels comfortable: the pullout sofa in his shabby office at the back of the Nail Salon.

Cut to credits, heavily featuring Saul Goodman, and I think with glee, this must finally be the episode in which Jimmy breaks bad. Ha! As usual, Better Call Saul defies expectations and instead lets us follow further into the spiraling down of Mike and, though instigated by Jimmy’s actions, Kim.

Kim is back upstairs, but it’s not all roses and sunshine. She hasn’t even been able to bring herself to unpack her belongings as Howard appears, beckoning her to a meeting with the new bank clients. As she closes the door on the meeting, she has to brace herself for what is going to be an uncomfortable meeting, what with Howard playing cold and aloof since Chuck went to bat for her. Seahorn has truly shined in the last few episodes and I'm not ashamed to say I'm rooting for a spinoff of this spinoff featuring my new favorite character. I'm almost more interested in what happens to Kim than I am how Jimmy finally morphs into Saul.

Later, Mike arrives home to a man waiting on his doorstep. The Salamancas are wondering if he’s come to a decision regarding taking the fall for Tuco’s gun. It’s a quiet threat, but Mike holds steady in his morals. His answer is firm no. He goes inside to unpack a welcome mat and some carbon paper. Doing a little home decorating, Mike? I wonder what he could be up to. He lays the mat at his doorstep and we cut back to Kim.

Kim is in front of a judge with the lawyers representing Sandpiper. They want the retiree’s medical records – an attempt to prove they are mentally incompetent to sue – and Kim does her best to argue against this request. She debates well, and though she ultimately loses, the gal shows gumption and impresses not only me but also Schweikart from the opposing firm, Schweikart & Cokely. 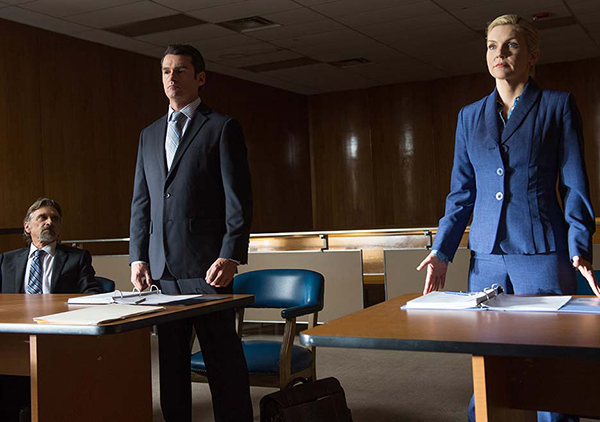 He approaches her after the proceedings and invites her out to lunch. While he engages in a little flirting, the guy obviously has some ulterior motives. He’s there to offer her a job. I’m left to wonder whether this is a ploy to usurp HHM or whether he truly sees the value in Kim. Kim seems to be wondering the same thing and as he continues on his spiel to win over her loyalties, she becomes both more uncomfortable but also, more interested in what he’s offering her.

“We’re talking partner track,: he offers to sweeten the deal as his drinks arrive.

With the way HHM has been treating Kim, it’s certainly something to think about and I wouldn’t exactly blame her if she succumbed to temptation.

At Mike’s, it becomes clear what the home decoration was all about. He’s McGyvered himself a rudimentary home intruder alert and checking under the mat we see the carbon paper, a load of fresh footprints on display. Somebody is waiting for him in the house. 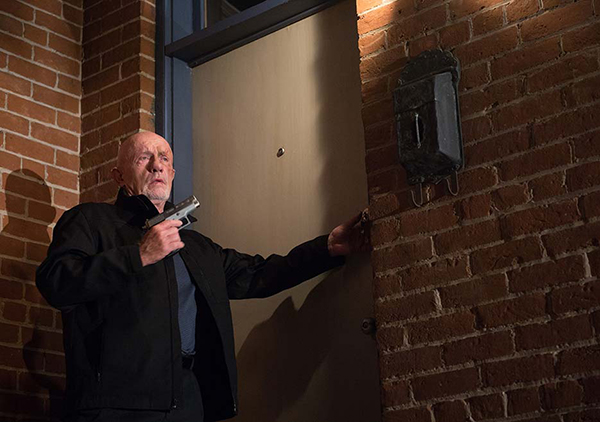 The scene is both tense and thrilling. Though we know there’s no possibility for Mike to be killed – he makes it all the way to the end of Breaking Bad after all – the direction is a work of art, engaging low light and shadows, and nothing but the cadence of Mike's footsteps on the creaking floors and cicadas chirping outside to set the scene. It’s almost painfully long, as room-by-room Mike clears the house, finally landing on the final door his intruders must be hiding behind. Mike flips on the television and lays the trap.  As Billy Mays (RIP, you ear-splittingly annoying bastard) exalts the glory of the Gourmet Quick Chop in his irritatingly loud and exuberant voice, Mike takes out his visitors with a couple swift cold cocks to the head. It’s a beautiful moment of satisfaction after such a long, slow build up.

“We were just supposed to scare you,” they say as they take their leave, wounded and subdued

“You try harder next time,” Mike drawls. Man, he’s such a badass.

Or is he? As he takes his time cleaning up the gun, a wound on his hand continues to bleed and Mike’s hand tremors uncontrollably. I wonder how much more it will take for Mike to crack.

At HHM, Kim is distracted, staring off into space and probably thinking about her job offer. When Howard sends in a secretary to tell Kim she has to skip lunch and work on some documents, she’s done. She ignores the offer of delivery on the company and instead walks right on out of the office.

At the hotel, Mike shares a moment with his granddaughter. Kaylee happily swims in the pool even though she’s not quite happy about having to leave her home because of her mom’s paranoid/possibly money-grubbing tendencies. The moment is broken, however, when up on the rooftop two figures appear, gazing menacingly at the scene below. 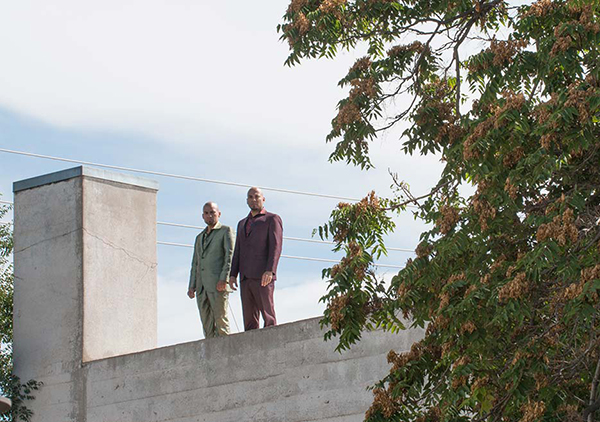 You might remember these two as the ruthless “Cousins” from Breaking Bad. You might also wet you pants a little bit with both glee/terror. One of them aims a pantomime gun at Mike before training his aim on Kaylee. Mike orders her out of the pool, wrapping her up in a towel and protecting her in a hug. It’s become clear to Mike he can no longer hold out on Hector Salamanca. 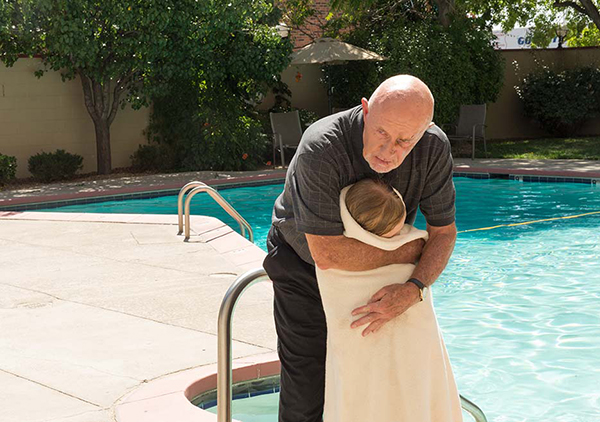 Back to Kim and she’s playing hooky at a bar in the middle of the day. She’s not looking too thrilled with her decisions, though. As she contemplates making a call regarding the job offer, she gets hit on by an engineer. But just as I’m wondering if she’s given up on Jimmy and is looking for greener pastures with the acceptance of his free drink, I let out a sigh of relief and a chuckle of amusement as she introduces herself as “Giselle”. Perhaps the girl is pining for Slippin’ Jimmy after all.

At Davis & Main, Jimmy is still trying to stick to his promise to Kim and play by the rules. Erin hovers over his shoulder, double-checking and inspecting his every move. Jimmy is a man on the edge. It’s clear he won’t be able to take much more of this and I wonder when he will crack. Save by the bell, Kim calls. She wants Jimmy to meet her downtown. She’s “got a live one on the hook.” 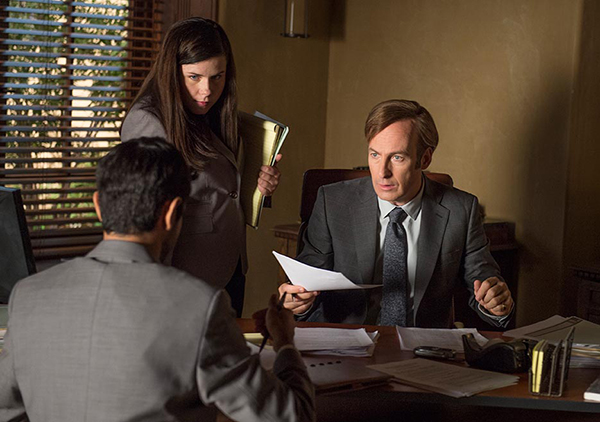 I’m both happy Kim is looking to have some fun and cringing… because this can’t possibly end well for her in the long run.

The two concoct a story where they are brother and sister about to land in the lap of luxury as their new startup Internet dating site is about to take off. Kim plays the drunken silly sister to perfection and Jimmy nails the part of cautious older brother well, playing coy and reeling in their mark. They make off with a check for $10,000 and the thrill of pulling a glorious scam. 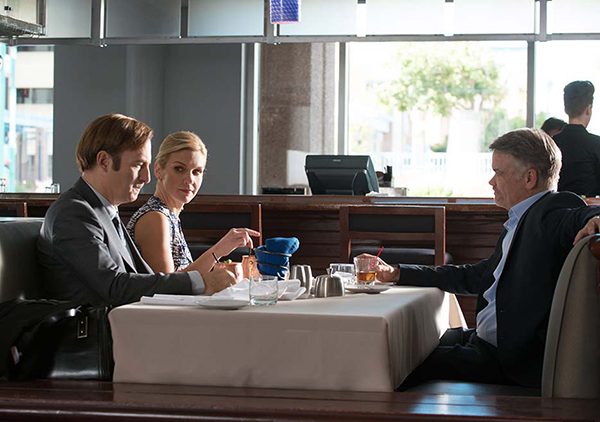 Meanwhile, Mike pays Hector a visit and agrees to the deal. In a tense game of mental poker - guns are drawn and threats made - Mike holds out for $50,000 to take the fall for Tuco’s gun. Nacho watches from the sidelines with interest, after all, it was he who started this snowball rolling.

“Maybe I need the $50,000 more than you do,” he says calmly when questioned about his motives for being so bold. Hector seems pleased by this response.

“See? This guy has giant balls,” he laughs in Spanish. 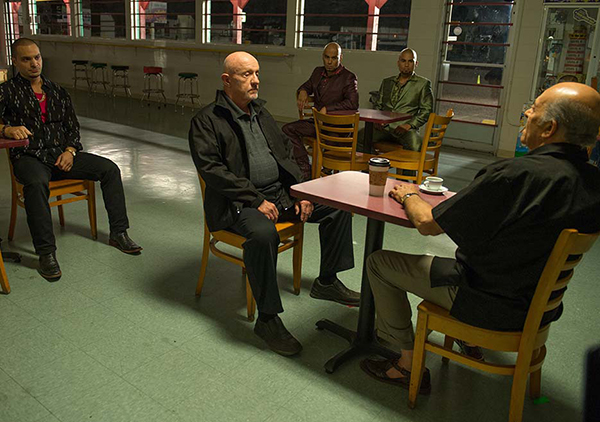 With the two in agreement, Mike is free to leave. Nacho shows up at Mike house shortly after to deliver the money. He volunteered so they could talk in private. Nacho wants to be assured Mike won’t be spilling on the deal they had. Still a man of honor, Mike hands over $25,000 to Nacho. It’s an apology of sorts; he didn’t complete his end of the deal and Tuco will be out of jail much sooner than they had hoped.

The episode’s close is almost painfully mundane. After the thrill of the con, Jimmy and Kim are now faced with having to return to their normal lives. Both seem upset about it, but neither is willing to admit it. Jimmy half-heartedly convinces Kim the job offer is a good idea and that she should take it, all the while assuring her he is happy at Davis & Main and didn’t take the job solely for her. The morning is a big fat lie on both their parts and the episode is capped off brilliantly as Kim grudgingly takes off for work and Jimmy wrestles with the never ending thorn in his side: The lackluster cup holder in his swanky company car.

For each of them, the previous night of shenanigans seems to be their “Bali Ha’i,” a reference to the just out of reach paradise in South Pacific, and the episode’s namesake. Taking a pry bar from the trunk, Jimmy takes what small victories he can from the humdrum life he’s somehow found himself in. He goes to town on the offending orifice and makes room for Kim’s gifted coffee tumbler. 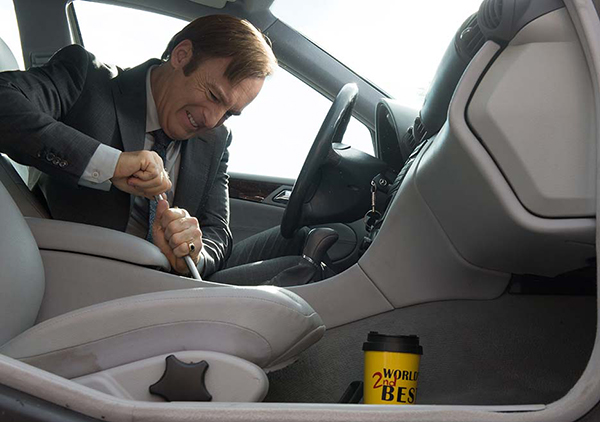 I had such high hope for this ship, but it seems doomed to fail, no matter how many square pegs Jimmy tries to shove into round holes.

And that’s another episode come to a close for you. Better Call Saul airs Mondays at 10 p.m. EST on AMC.