After a couple weeks of focusing on Kim and Mike, Better Call Saul swung back around and delivered a Jimmy-centric episode that is sure to delight fans as he took his first big step into becoming Saul Goodman.

Hit the jump for your recap and review.

We open in a flashback to 1973. A young Jimmy is pretending to work in his dad’s grocery store while actually perusing a pilfered Playboy mag. While he’s supposed to be sweeping the floors. A man comes into the store touting a sob story about a broken down car and an epileptic kid who needs his medicine. Jimmy senses a con and he takes his father aside to let him know he’s being scammed. Jimmy lets his father know that he’s known as an easy mark but Mr. McGill won’t have it. To prove his point, when the grifter asks for $5, Mr. McGill gives him a $10 bill to prove a point. He goes to the back of the store to look for spark plugs to help the guy further and Jimmy mans the register where his point is proven when the guy asks for a couple cartons of smoke and flashes a couple hundred dollars.

“There are wolves and sheep in this world, kid,” the scam artist says. “Figure out which one you’re gonna be.”

Jimmy takes the lesson to heart and annoyed by his dad’s naiveté, pockets the money for the smokes.

It seems Chuck’s story for Kim had merit and it was nice to see the payoff this week. But that being said, I have to wonder just how much of the missing money was due to Jimmy and how much was due to his father’s charity to smarmy strangers.

We catch up with Jimmy who’s doodling on a legal pad: W's and M's, and lots of them. I wonder what it stands for. He’s waiting for Mike at the DA’s office. Jimmy, speaking for Mike, says his client wants to amend his statement to the police. He’s not saying the gun was Mike’s but he’s definitely saying the gun wasn’t Tuco’s, and he will swear to that in court. 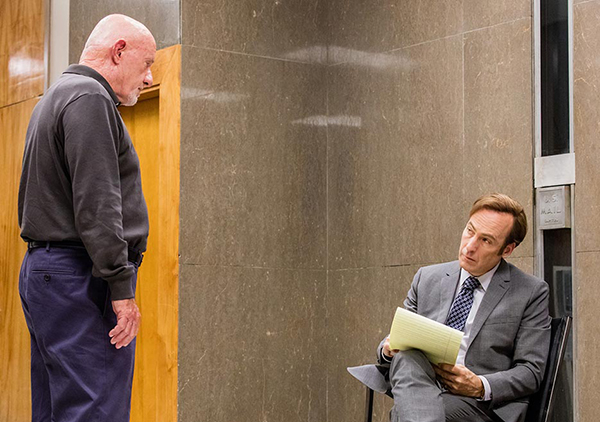 “Maybe a bird dropped it from its beak,” Jimmy says.

The DA's are not amused. They want to put Tuco away for a long time and they wonder if Tuco threatened Mike, or paid him off. Mike gives them a long hard stare before leaving. He doesn’t look happy with the deal he’s made with Hector. On the way out, Jimmy tries to chit chat with Mike and bond over their mutual run-ins with Tuco, but Mike is cold as ice, suggesting they take separate elevators out of the building.

Jimmy calls Kim from the parking lot to check in and finds out she isn’t going to officially quit HHM until she has an offer from Schweikart and Cokely. She’s excited, though, because she believes the offer is forthcoming and that it will be both generous and will pay off her student loans. They agree to meet up later.

At Davis & Main, Jimmy calls in Omar to draft up his resignation letter. Omar’s shocked Jimmy wants to quit, and I’m a little surprised too. Yes, the job is mundane and boring, but he’s got a hell of a lot of nice perks he’d be giving up and there’s Kim to think about as well. They just had that chat last episode where they tried to convince each other that playing it safe was the right idea. But Omar throws a spanner in the work for Jimmy, pointing out he’ll have to give his bonus back. Jimmy says they already gave him the check, but Omar points out the fine print in Jimmy’s contract, stating that if he quits, he has to pay it back. Predictably, Jimmy backtracks, asking Omar to keep his mouth shut about any resignation plans and claiming temporary insanity and stress.

In the car with the infuriating cup holder, Jimmy drives toward Albuquerque. Stopped at a traffic light, he ponders, captivated by a Sky Dancer – those inflatable tube guys - at a used car dealership. It bears a remarkable resemblance to Saul Goodman in attire and it’s with a wee squeak of glee, I realize where this is going. The car behind him honks, and with an adorable little smirk, Jimmy drives off.

Jimmy goes on a shopping spree, and we meet back up with him as he fills his closet with a truckload of the loudest, most colorful and obnoxious suits he can find.

Jimmy ends the scene by buying a set of bagpipes and practicing, loudly and obnoxiously, in the office. The long-con finally paying off, Cliff fires him. Not for cause, but for being, well… annoying.

Cliff knows Jimmy provoked Cliff to fire him for “being a jackass” to save his bonus. Cliff just wants to know why Jimmy didn’t give the job a chance when they went above and beyond to make him comfortable, including his ridiculous desk.

Jimmy offers to write a check for the $7,000 cocobolo desk and departs with some final words.

“Hey Cliff, for what it’s worth, I think you’re a good guy.”

“For what it’s worth, I think you’re an asshole.”

At HHM, Jimmy pays Kim a visit and we learn why he was so adamant about keeping his bonus check. Instead of quitting HMM to work for Rich Schweikart, he wants her to become partners with him. They’ll call it Wexler McGill and he already has a shiny new business card printed out to show her. Now we know what the doodles were about. He’ll even pay off her law school loans with his bonus. Moving to Schweikart and Cokely is a lateral move; he’s offering her a step up to the very top of the ladder. “Schweikart is just Howard by another name,” he says. It’s a pretty sweet offer and Kim appears to consider it, but she has a couple questions: What kind of lawyer will he be? Can he play it straight, or will he be “colorful?”

He’s begins to lie, but at the last moment, he reconsiders and tells her the truth. Doing things the way other people want him to blows up in his face. It nearly destroyed her career, he adds. “There’s no point doing this if I can’t be myself.” 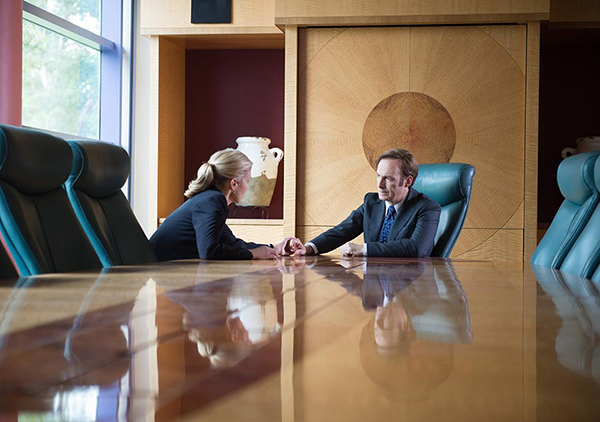 I both swoon and feel my heart sink with her decision. It feels like a turning point, and not necessarily for the better. Jimmy looks visibly shaken.

Cut back to Mike and the pressures keep mounting. Stacy, his daughter-in-law, has found a house for her and Kaylee. A big safe house, with a big backyard, in a nice neighborhood.  It’s got a big price tag to go along with it too.

“Don’t worry about it, we’ll make it happen,” Mike says. “Whatever the cost. If you want it, it’s yours.”

That feels ominous. And they head off with the real estate agent to take care of the details. To those fans of Breaking Bad, yes that’s the house Stacey and Kaylee reside at in the show. So we know Mike makes this happen. Whatever the cost. Which we know will be high. Sigh. I really dislike Stacey.

Meanwhile, Jimmy’s back at the nail salon and Omar is there to help him move his cocobolo desk in. He still seems flabbergasted by Jimmy’s decision and quickly splits to go home to his kids. Who knew he had kids?? 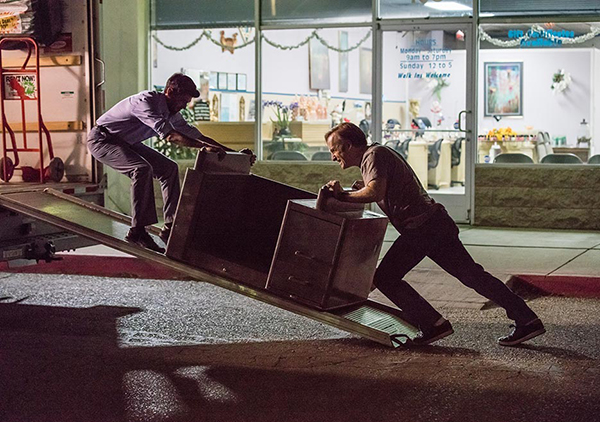 All moved in, Jimmy sets his answering machine. At first, he goes for the fake English accent and the name of James M. McGill, esquire, but he quickly foregoes that in favor of the law offices of Jimmy McGill. Simple, sweet, himself. The man seems pleased.

Meanwhile, Mike pulls up to a hidden spot across from the ice cream joint where Hector Salamanca does business and ponders his life choices. He doesn’t look pleased with the path he’s chosen, but he does look resolute.

The next morning, we cut to Kim in the middle of her interview with Schweikart. They want to know about Kim’s past and where she came from. We learn she’s originally from a small town on the border of Kansas and Nebraska. We learn she didn’t want to end up working at the local grocery store, the Hinky Dinky, and married to her high school sweetheart. She wanted more. Nebraska, you say? Could that have played a part in Jimmy/Saul’s eventual locale? Or is it just a happy coincidence? On the way out, Kim makes an embarrassing faux pas, referring to Rich as “Howard”. It seems Jimmy’s prediction that Rich and Howard are "the same man in a different suit" has hit home for her, but Rich isn’t upset and it seems her job at Schweikart and Cokely is all but a lock.

Up on the rooftop parking deck after the meeting, Kim smokes a cigarette and ponders her options. She pulls out Jimmy’s mockup business card and tears it in half. The girl has come to a decision.

And so for the closing scene, we meet up with Kim and Jimmy at the nail salon. She has a pitch for him: Instead of being Wexler McGill, partners at law, she proposes they become Wexler and McGill, separate practices under one roof.

“We’re both headed uptown, so why not share a taxi?” she says.

They can share the costs of operating businesses. She’s excited about the idea but Jimmy looks a little flummoxed.

“Say yes,” she tells him, as the episode fades to black.

Does my ‘ship still have sails, or will this be the final nail in its coffin?

“Inflatable” was a stand out episode of Better Call Saul. Capped off by the delightful montage, we learned some new nuggets of Jimmy and Kim’s backstory and the episode set in motion a whole slew of new events to come. I can’t wait until next week.