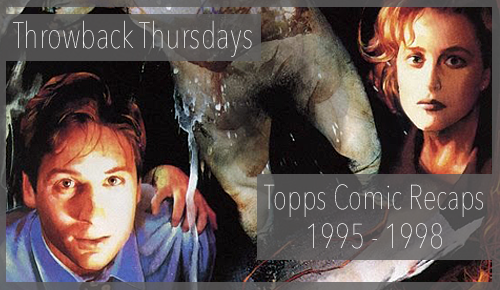 The very first X-Files comic, "Do Not Open Until X-Mas" was published by Topps twenty years ago this month, way back in January 1995 as the show's second season was airing in the US. The comic series was written by Stefan Petrucha and illustrated by Charles Adlard who is now best known for The Walking Dead. Starting this month we will be looking back at the original Topps comics issue by issue, beginning of course with #1. For each issue we'll be giving you a full (and therefore spoiler filled) plot synopsis, as well as a look at the letters page and any other X-Files related features originally printed alongside the story. For our recap, read after the jump. 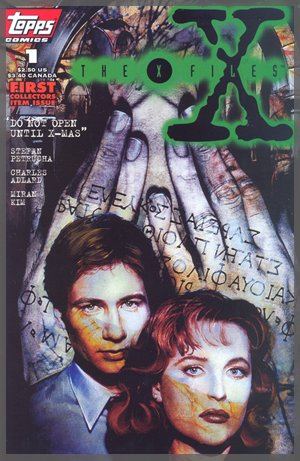 Synopsis:
Issue #1 opens in a church confessional, a somewhat familiar setting for The X-Files. The faceless man confessing soon leaves the booth, followed by the Father who finds him sitting in a pew. The young man explains that he is beyond help, he is "a thief in the house of God" and has committed "the final sin". Climbing atop the altar, he hurls himself through a stained glass window depicting Jesus and a group of children. A quotation from "The Book of the Damned" by Charles Fort, generally considered to be the first book ever published about anomalistics (using science to try and explain strange phenomena including ufology, cryptozoology, and parapsychology) accompanies the full page image.

Our first visit to the basement office begins with a classic Mulder slideshow. Mulder tells Scully about The Miracle of The Sun, a series of events that culminated on October 13th, 1917 in Portugal. Visions of the Virgin Mary were said to have appeared to three young children. Mary gave the children prophecies, the third of which was written down by the eldest child as an adult and sealed, not to be opened until 1960. At the time of this comic being written, the contents of that third prophecy - known as the Fatima Prophecies - were still a church secret with many believing it contained details of a forthcoming apocalypse or similar. The prophecy was finally released on June 26th 2000, five years after this story was published, although a new conspiracy has now evolved claiming that this final prophecy is either a fake, or that parts of it have been withheld. 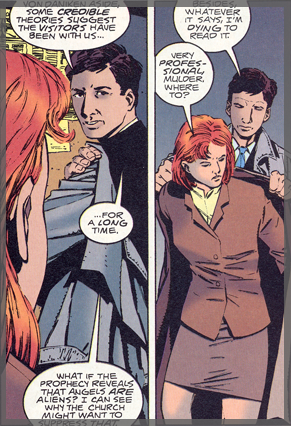 Mulder tells Scully that a John Doe, the man we just saw jump through a church window, claimed to have stolen the final prophecy from the Vatican. The pair discuss potential theories, with Mulder clearly under the impression that the prophecy is UFO related and Scully joking that she expects him to begin quoting Chariots of The Gods at any moment. They visit the church where they are met with significant hostility from both the Father and the crowd of worshippers there to pray. The Father tells them that he and the others believe the man was touched by God because he smelled of roses and rigor mortis has yet to set in (something Scully has seen before in Season One's "Revelations"). Scully offers some scientific explanations for this regarding poisons and explains that an autopsy must be performed, resulting in them being pelted with snowballs by the crowd. As they run back to their car, Scully tells Mulder that the situation is difficult for her, and describes herself as "a lapsed Catholic".

At the Vatican, a Cardinal meets with a General to discuss getting back the prophecy before it can be revealed. The General reveals that one of his own men has infiltrated the terrorist group responsible for the theft, led by Nikoli Varasdi. Meanwhile Scully is performing her autopsy when a grandmother and child appear asking to touch the "Holy man". In an odd and somewhat out-of-character move (although Scully did often act rather differently in religiously focused episodes - which possibly makes this an odd story to run with for the opening issue), Scully agrees to "forget" to lock the morgue door while she slips out for coffee, only to return and find the body missing. Luckily Mulder is outside and happens to spot the thieves. He chases them to LaGuardia Airport but is unable to call for backup because of a faulty radio, and the thieves get away.

The next morning Varasdi's terrorists call to make arrangements to sell the prophecy to an unknown party. One of the group decides that after seeing "the look of peace" on his dead friend's face that he wants the same for himself, and chooses to read the page. There is a tremendous explosion, and as his colleague grabs the page his arm is partially lost in a beam of light. Meanwhile Mulder and Scully visit the owner of the jet used by the thieves to escape with the body. Mr. Newton is a collector of religious artifacts who has funded expeditions to find Noah's Ark on Mt. Ararat, facts which make Scully dubious when he claims his jet was recently stolen and he knows nothing of the stolen prophecy. The agents visit the scene of the explosion and manage to pick up some fingerprints from a dismembered hand which leads them to an agent who has worked for the NSA and CIA. Mulder is warned off the case by Skinner who gives him the idea that the prophecy is wanted by the government. The Smoking Man tells him to "go chase Big Foot" to which Mulder replies that it's currently the wrong season. 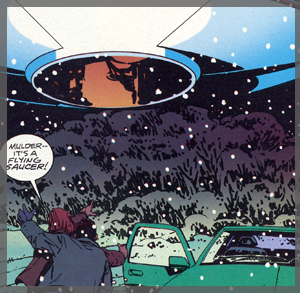 Instead Mulder and Scully surveille the Newton Estate through the night. Scully realises they are not alone in the dark and the two of them witness a silver UFO appear. Mulder thinks it's a government ship rather than an alien one, sent to "psyche out" Newton, and Scully shoots it down with a single bullet - which is simultaneously badass and completely implausible. As Mulder wonders if they could fit the wreckage into their car's trunk, the sky erupts with explosions and an army of armed men appear from the shadows. The agents leap into their car and race for the church where they now believe an exchange will occur.

Newton exchanges the prophecy with Varasdi for a fake vial of plutonium before the agents can get there. Once they arrive at the scene he carefully opens the poison soaked letter and begins to read it aloud, deciding after the first few words to keep the contents to himself. Scully and Mulder fight through a sudden snowstorm to try and catch him before an enormous vision of an alien-faced Virgin Mary appears, killing Newton by an apparent heart attack. Mulder picks up the prophecy and is about to read it when Scully begs him not to. They suddenly find themselves surrounded by soldiers who force them to hand it over, telling Mulder that if he reads it, they will be forced to kill him.

The story ends in Washington on a snowy bench. Scully approaches Mulder bearing a wrapped Christmas present, only unlike in "How the Ghosts Stole Christmas" we get to find out its contents. It's a t-shirt she's had printed which reads; "Everyone else got to read the Fatima prophecy, and all I got was this lousy t-shirt." She comments that maybe she has more faith than she realised, prompting Mulder to ask where she believes her father is. She answers that she is unsure, but knows that he still exists somewhere and is happy. Mulder admits that he is envious of her, saying that it would be a relief to believe the same for his sister. However when he looks up at the Heavens, all he sees "are the stars." 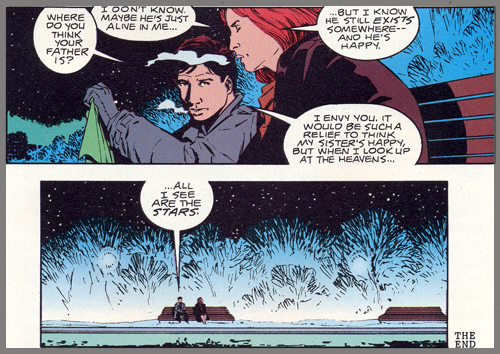 Letters and Other Features:
The original issue containing this story featured no letters section but it did give us a piece by author Stefan Petrucha on how the comic series came to be. In it he also speculates on just why The X-Files is so compelling, by way of having us imagine a dead body in a "small, windowless room" with a locked door and two small puncture wounds on its back. Were this a classic detective story he surmises, then the culprit would be an ingenious human, in a horror story it would be a spirit, and in a sci-fi it would be aliens. However on The X-Files "it could be any, all, or none of the above". This, he reckons, is the place where The X-Files lives and the reason for its popularity, a place "between science and faith where all the tools we humans create to explain reality are available, but none of them are necessarily up to the task". Welcome to The X-Files.