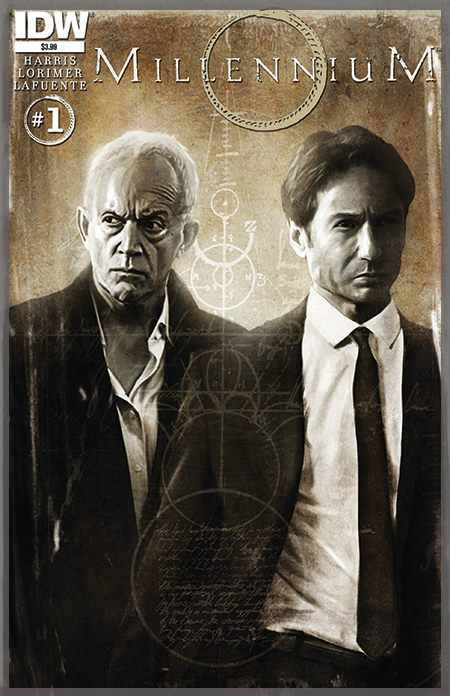 After a successful run of The X-Files: Season 10 comics, Joe Harris and IDW have brought back another beloved Chris Carter creation in Millennium. We got our first hint of what Frank Black was up to these days in Season 10, issue 17, and now we can follow Frank's adventures in his own series.

I'm one of those Philes who is late to the Millennium party. I first met Frank Black in The X-Files: Season 7, episode "Millennium". As someone with incomplete knowledge of Frank Black's world, I wondered if I would enjoy this comic much, or if it would be too difficult to follow. I can say this is a great read, whether you're a longtime fan of Frank Black or not. Read the rest of my recap and review after the jump.

We begin in New York City, December 24, 1999. While some giant law firm throws a Christmas party, two workers come in to perform some kind of repair on the company's servers. As they work, the men discuss Y2k, the upcoming millennium, and humanity's lack of awareness about what's "right under their noses." They hint that they're helping move whatever is coming along.

But as we all know, the world didn't end.

The story cuts to present day, after a slate with the quotation "Every new beginning comes from some other beginning's end." from Seneca the Younger. Fans of the show Millennium will recognize this tactic as something used in the show itself. The scene is a federal penitentiary in Indiana, where a group is discussing the release of an inmate. Presenting an opinion on the matter is not Frank Black, but Fox Mulder. The inmate in question is no run-of-the-mill criminal, but Monte Propps. It was Mulder's monograph that helped catch him in 1989, something the agent is well known for. 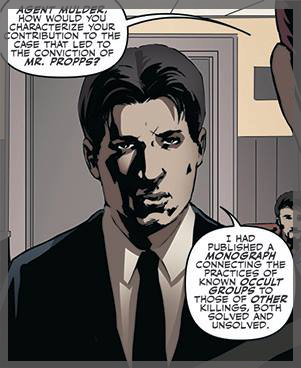 We learn more about Propps' crimes and how he manipulated his victims. Mulder explains that Propps broke his victims down in captivity and eventually induced something similar to Stockholm Syndrome. Once the victims were released they drowned themselves, almost "as if he'd cast a spell on them," according to Mulder. Despite Mulder's insistence that Propps is still dangerous and a master manipulator, the board decides to release Propps. They cite his model behavior as a prisoner and lack of evidence that he delivered the final death blow as reasons to release him.

As Mulder leaves, he notices Frank Black's name on the sign out sheet. The scene changes to a rundown motel and we finally meet Frank. He enters the motel room with newspapers in hand. 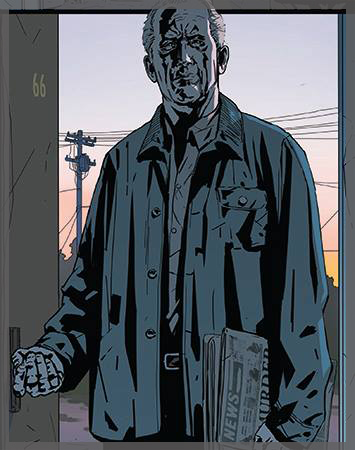 He adds them to a collection on the floor, and has what looks to be a flashback of his late wife Catherine. Then we see Frank is not alone. Mulder confronts him and gets us up to speed on where Frank has been for the last decade. Frank has been off the grid and out of contact with his daughter Jordan. Though the Millennium Group is gone and failed at their mission to bring about the end time, Frank is still hunting killers.

Frank has another vision, this time of his daughter asking, "Do you hear them Daddy?" While he thinks about this, Mulder invites Frank to come on a ride-along.

The story moves over to what I'm assuming is a halfway house of some kind. Monte Propps is moving into his new place while men are working in the hallway. Propps asks the man helping him, "You hear them...don't you?" which continues to pop up throughout the story. The woman who had a hand in releasing Propps comes to check on him, but Propps isn't exactly thrilled to see her. We see Propps saying, "I can hear them," as the woman attacks him using methods similar to his own.

Mulder and Frank arrive, but it's too late. As Mulder says, "looks like he made his early release," they find Propps drowned in the bathtub, with blood smeared in what could be symbols over the tile. And this is where we end part one, with the story to continue in "Secrets and Keepers."

Millennium #1 is written by Joe Harris, with art by Colin Lorimer and colors by Joana Lafuente. Letters by Shawn Lee, edited by Denton J. Tipton and executive produced by Chris Carter.

Overall, I really liked this first edition. As I said earlier, I think it's easy to follow even if you only know Frank Black through his appearance on The X-Files. I sometimes have a hard time following stories in comic book format, but thought this story flowed well.

I loved the throwback to Monte Propps. That's the case that made Mulder's early career and gave him the ability to pursue cases outside of the FBI mainstream. Hearing more about what Propps did was fascinating and a good way to draw X-Files fans into the Millennium world.

And what a world it is. I want to know more about what Frank is seeing, and why he's continued to stay off the grid. When we leave him at the end of The X-Files' "Millennium" episode, it's a happy occasion. He's checked out of the mental hospital and has been reunited with his daughter Jordan. The world didn't end, instead he's leaving with his beloved daughter. So what happened to Frank in those fifteen years? In watching the TV series, I've often wondered how Frank lives with his visions. Perhaps even when he tried to step away and leave that life in the past, it was simply too much. I'm excited to see where this series takes us, and the answers it may explore along the way.

The art is great on both the regular and incentive covers, though I do find Mulder's likeness a bit off. That continues throughout the comic, but I did find the colors used to be spot on. They suit the mood of the story and re-create the familiar "1013 gloom" so well. And the sunset over the motel is fantastic.

I think Millennium is off to a great start and I'm looking forward to seeing where the ride takes us.

Visit your local comic shop to check out Millennium Issue 1 or Comixology for a digital copy.

If you want more Frank Black while waiting for the next issue, join XFN's online Millennium Rewatch! Catch a different episode each Sunday 10:30 PM GMT, 5:30 EST. Follow along with veteran Millennium fan Sophie Brown @easyqueenie and myself @Synergy3k and of course @XFilesNews on twitter. We're now almost halfway into Season 1 and getting more insight into Frank, his cases, and his family life. Chat along with us using #XFNMLM.