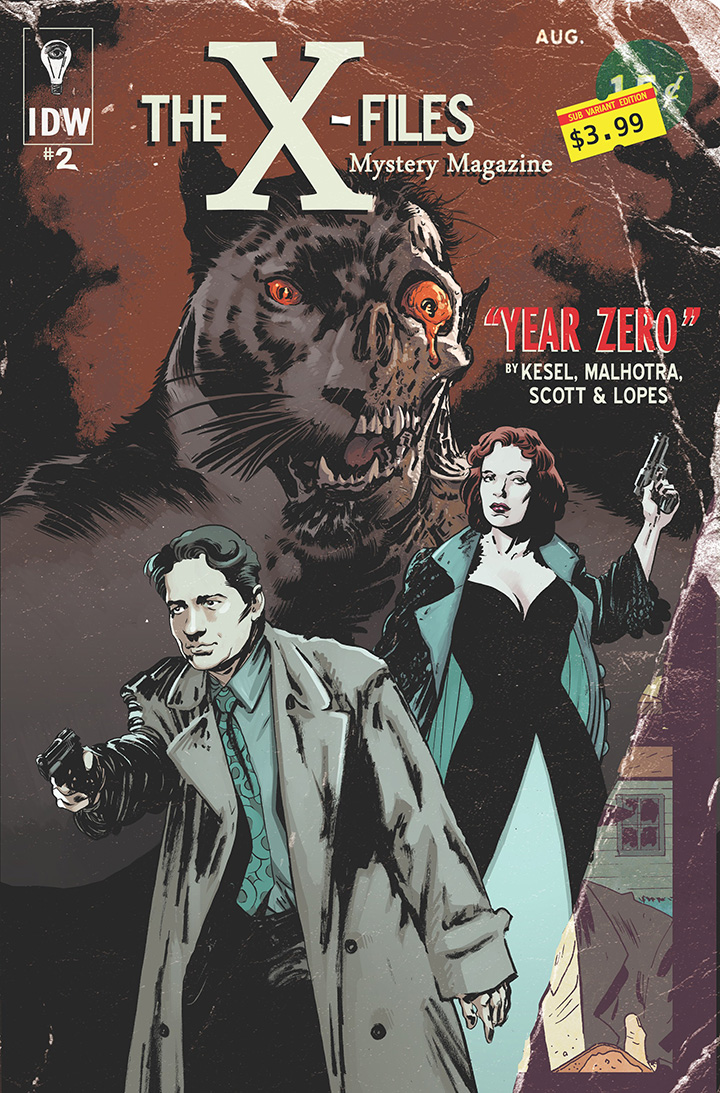 The X-Files: Year Zero, Issue #2, once again delivers brilliantly, artfully merging both stories and timelines into a cohesive whole. Karl Kesel nails Mulder and Scully's voices, and in the process, continues to make me fall in love with Agent Bing Ellison and the unfortunately named Humility Ohio. After reading this issue, I can't wait to see what's next for the dynamic duos and how it all leads to the creation of "The X-Files". If you pick up just one comic series this year, I'd recommend Year Zero.

Hit the jump for the spoiler-filled review below.

We pick up where we left off last issue, in the living room of Mrs. Dorothy Sears, circa 1946, as she describes to the agents her first meeting with the mysterious Mr. Xero. We learn he's not simply a benevolent intruder, but that she saw a flash of something "hard" before his face smoothed over. We also learned he has something of a language deficit that has yet to be explained. Questioning her instant trust of the intruder in her home, we then learn that Mrs. Sears believes she has the gift of second sight. Xero has offered Dorothy the chance to stop wars, end famines and live forever and apparently, that was an offer she couldn't refuse. Millie questions the letter she received, and it's revealed that yes, Xero did in fact give it to her, and it was recently. Dorothy goes on to explain that Xero likes to talk in riddles, and this leads our agents, via Millie's letter, to Montana.

Cut to Jersey in the present day, and Mulder and Scully are camped out in a diner resuming their conversation from the car in the last issue. Scully, true to form, raises her skeptibrow high and thinks Mulder is crazy, pointing out that, so far, any tips from the mysterious Zero/Xero have been helpful. Mulder concedes her point, but rationally explains that, either way, they need to talk to their tipster.

Here, they are interrupted by the waitress bearing coffee, and for this rabid Twin Peaks fan, I was delighted to read my second FBI crush, Fox Mulder, refer to my very first, Dale Cooper. It was a great little shout-out. Moving on and back to the story...

The waitress overhears their conversation and asks if she can help. Turns out she can't, but something tells me there's more to this dame than meets the eye. In the end, she leads them to the town square where there is... wait for it... a 'town square'; an art project the locals use as a community bulletin board.

It's raining heavily when our agents arrive, and who should appear but Mr. Spoon, the animal control agent we met last issue, along with Aura Starlight, (Lord, the names in this series. Cheesy goodness!), the artist behind the 'square.' She's a bit of a hippy and seems enamored with the agents and the FBI. The liberal use of emphasis leads me to believe she's somehow embroiled in this mystery.

Mulder asks Mr. Spoon if he could describe Zero, but he does him one better, revealing that he saw him moments earlier on the other side of the monument.

Mulder rushes to the other side and spots Zero hanging out by a tree. Mulder confronts him about Ellison and Ohio and is rewarded by a tip of his hat and a gloriously cheesy pun. Unfortunately, lightning strikes, literally, as Zero reveals a transformed and ugly face before disappearing, seemingly into thin air. The tree falls, aiming directly for Dell Spoon, but he's saved by Scully just in the nick of time.

Finally, she's convinced his life might be in danger, because while Mulder was with Zero, Scully found out something too. On one side of the square, all but one of the postings had been removed. The only thing remaining? A news article regarding Dorothy Sears' death back in 1946.

Back to the past and now in Montana, the agents are talking to the local PD. Bing has a 'moment,' thinking he spies Xero, only to instead find an officer; it doesn't exactly help their situation with the mistrustful of feds policeman. Another officer deflects from the awkward moment though and reveals the suspect they are looking for is a kid by the name of Ish. Mille (because I still can't type Humility Ohio with a straight face) recognizes the name from her ambiguous letter; it's a clue!

The group ends up at Glacier National Park. Millie, feigning fear and betting on 1940s misogyny, ditches the local PD and reveals to Bing that she saw an old logging road on the map and explains that it's where she would go and double-back to if she was on the run like Ish.

Sure enough, they follow the clues and some tracks to a cabin where they find their suspect. Ish is hiding and scared; not exactly the picture of the brutal killer they are looking for. But he does have some information. Earlier, he'd witnessed a spirit take over the missing local, Watkins, eventually fully taking over his body and bursting out from within. He believes it is the "Manitou," an evil spirit that is now tracking him, and by default, Bing and Ohio, because they know its secret.

They hear a loud roar, and the agents spring into action. Bing pulls his gun, and in a display of badassery, so does Millie. Turns out, she's been packing heat on the sly and has no trouble using it. The agents prepare, avoiding the doors and windows when... Bam! The beast bursts through the wall and the issue ends!

I've already mentioned what a great job Karl Kesel does with the writing, but let me reiterate. Mulder and Scully's banter is spot-on, and Bing and Humility are a class act that I can't wait to get to know better. The story flows nicely, and you never feel bogged down by the time jumps; they are seamless.

The art is by Greg Scott and Vic Malhotra, and for both stories, the art works beautifully. The coloring, by Mat Lopes, is subtlety different for each period and looks gorgeous.

Now, on to the covers. Please don't make me pick a favorite! The regular cover is by Carlos Valenzuela, and he delivers a gorgeous piece in blue, depicting both sets of agents in all their glory. The subscription cover, with art by Robert Hack and colors by Stephen Downer, continues with the hard-boiled detective novel theme and is fantastic. 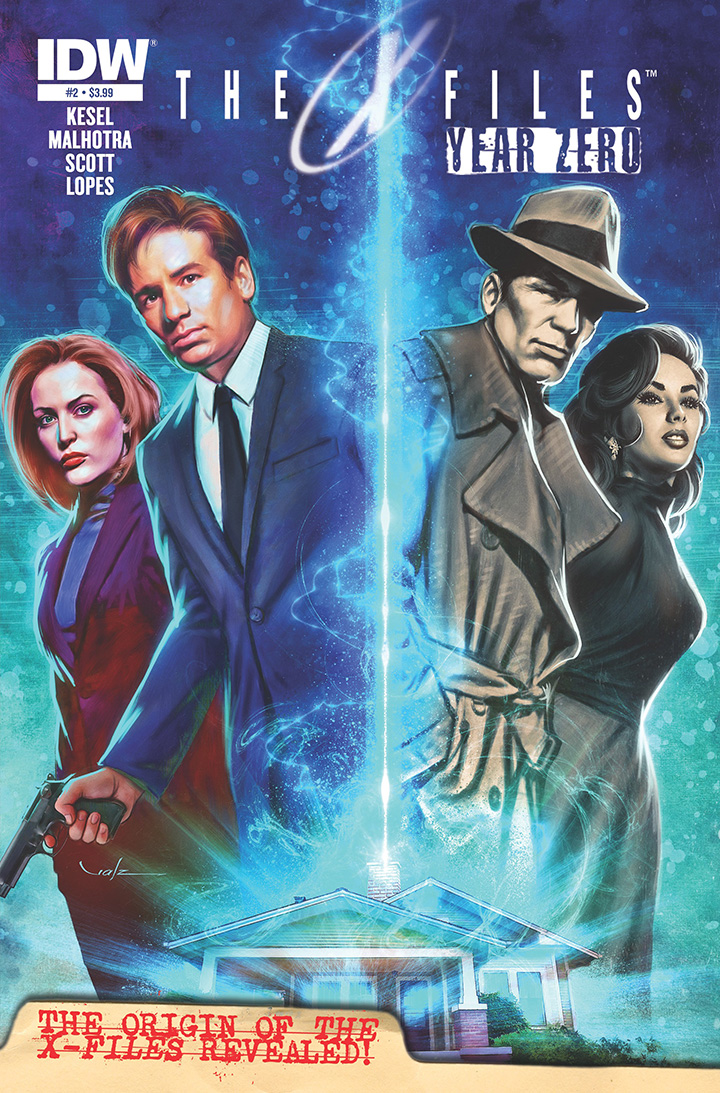 Did I mention how much I love this series? Because I do. I really, really do. Could you tell?

You can pick up a copy August 20th at your local comic book retailer, or, of course, subscribe via Comixology. Be sure to let IDW know what you think by contacting them at This email address is being protected from spambots. You need JavaScript enabled to view it.. Remember to title the subject as 'Okay to publish' if you'd like it to appear in future issues.