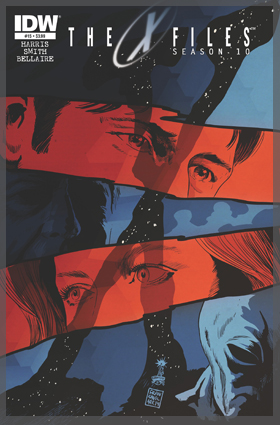 The X-Files: Season 10, #15 is out today and with it our newest review. I found this last issue of the multi-parter very satisfying. Even though the content is cryptic at times and I could have used a couple more pages to elaborate further on the nature and consequences of the new advances of the story, Joe Harris delivered an issue that was filled to the brim with intrigue and builds upon the mythology being developed for Season 10.

As I've said in the past, this is not a series that is looking to wrap up story lines right away, and I'm looking forward to the next mythology issues coming up soon.

For the spoiler filled synopsis and more considerations, click on "Read More".

Pilgrims, part 5 is the last installment of the ongoing multi-parter weâ€™ve been enjoying these past five months. The first sequence of this issue continues the CSM/Krycek storyline.

As weâ€™ve learned, Krycek seems to have no recollection of certain parts of his life, going so far as not remembering getting shot by then AD Skinner. CSM has detained him, and based on their conversation, it seems like Krycek has been subject to a series of abductions that date back to his infection with the Black Oil. Ever since then, it is questionable if he has been part of the events attributed to him, or if a version of him has actually been the perpetrator of those actions. Krycek also seems to think that CSM could be suffering from the same â€œailmentâ€. He thinks they should unite in their intentions, since they could be looking for the same thing. The Sheltem. Krycek urges that they have to stop it from leaving,

Meanwhile, in Skyland Mountain, Virginia, a group of state troopers have found Mulder. Theyâ€™ve been instructed to detain him. He doesnâ€™t resist arrest, but then again, heâ€™s not himself. When Scully and Skinner arrive to the enigmatic place, something has gone very wrong. According to the surveillance video, when the Sheriff attempted to cuff Mulder, the Sheltem transferred bodies, possessing the man and making him shoot his team members. Mulder didnâ€™t shoot the troopers. Scully seems a little relieved by this knowledge, and sure enough they find Mulder not too far from there, clearly disturbed by what he has gone through. 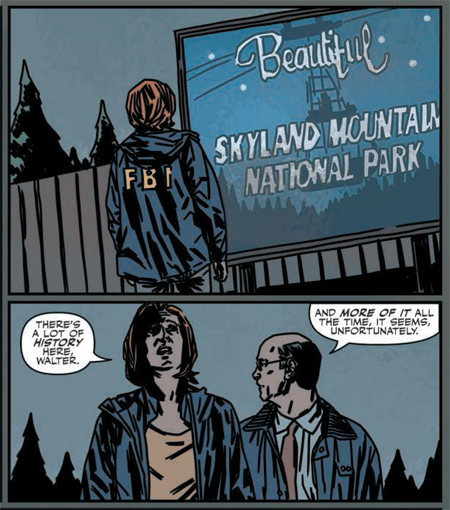 At the same time, CSM continues in his â€œcross examinationâ€ of Krycek. Heâ€™s bent up on making him confess any information he may have about Mulderâ€™s whereabouts and the entity heâ€™s been carrying around. The scene is filled with suspense and even gorey actions by the old man, until he gets interrupted by his employer, the same shadow figure that has been ordering him around in past issues. He confirms that Krycek has been used by these forces, twisting the time and space continuum to have him act as an exterminator, whose multiple incarnations have travelled over time hunting for the forsaken ones. Every time that his physical presence is â€œcompromisedâ€, he gets abducted back from a point in time in the past, and he starts all over again. This explains the difficulty he has remembering events he supposedly experienced. This version of himself has not not lived through those experiences; he canâ€™t access those memories willingly, but theyâ€™re somewhat stored in the depths of his mind. This shadow figure, who possesses a few kinetic and mental powers, can read his mind, finding some of that information stored away. The question remains, what does the Sheltem want?

According to Krycekâ€™s recollection, it wants to go home. So he â€œrestartsâ€ the processâ€¦ and shoots himself.

Going back to Skyland Mountain, Mulder assures Scully that he fought hard to fight the Sheltem off, trying to not give up any information that may compromise them, and in the process he learned that William, their son, is okay. â€œTheyâ€ donâ€™t know where he is, ensuring the safety of their child for now. Scully wants to believe in this piece of news, as much as this has taken a toll on her. Just then, Scully senses a change in the wind around them, something that she can sense due to her connection to this place, and an electric storm begins to form, delivering a set of known abductees. The Sheltem joins them and he seems to be on his way to go home. Suddenly, they encounter the race of faceless aliens weâ€™re so familiar with from the show. Theyâ€™re attacked and exterminated, theyâ€™ve gotten a hold of him. Krycek arrives at the same time, seeing the aftermath of the attack; it could mean that heâ€™s finally free from the endless loop heâ€™s been subjected to.

CSM attends a meeting with the syndicate, bringing new knowledge from his sources at the FBI. His boss recognizes how much pride he takes in these secrets and his ability to bask in the power that information gives to him, but also makes a point in reminding him that it is because of him that he has gotten these second chances. They all have been brought back, even when theyâ€™ve been â€œkilledâ€ in the past: Mr. X, Well Manicured Manâ€¦ theyâ€™re back, theyâ€™re just not their â€œoriginal selvesâ€... then, most likely as a show of his power, he stabs CSM with the stiletto, reducing him to the ever-toxic puddle of green goo. Fret none, a new version of CSM arrives just then and there to clean up the remains of his â€œoldâ€ self.

What? Did it seem like you just got ran over and your mind is blown? I have to say, Iâ€™m right there with you. My mind is blown.

The things that I liked the most about #15: Even though brief, I loved Scullyâ€™s reaction to the ordeal. I donâ€™t know if it is because I could imagine the scene on screen, but I believe it would have been one of those understated ones that Gillian Anderson would have communicated so well with her understated and quite communicative way of expressing her suppressed feelings. For these characters, it has been quite an ordeal that has left them exhausted and worn down and I wish we had an epilogue that could explore more in the aftermath. 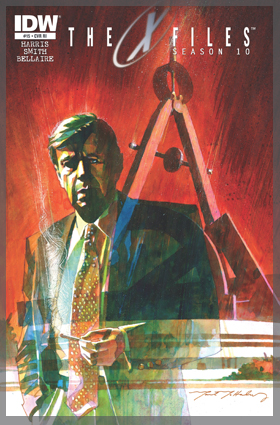 I really enjoyed the unfolding of the plot, even when it took a couple of reads to fully understand the logic behind it. Although Iâ€™m sure that if youâ€™re a Back to the Future fan it was an easy task for you. It is an enjoyable read, even when the story is challenging, and I think that Harris did a good job staying on the right side of that dare.

The issue remains consistent with the work that has been done by Jordie Bellaire and Matthew Dow Smith, and once again, my favorite cover was executed by Mark McHaley. The regular cover, which doesnâ€™t skimp on its artful take on the topic of the issue, was done by Francesco Francavilla.

The X-Files: Season 10, #16 comes out in September. Make sure to continue to support the series and secure your subscription by contacting your local comic book retailer. You can also enjoy the series via Comixology and donâ€™t forget to let IDW know your thoughts by writing them at This email address is being protected from spambots. You need JavaScript enabled to view it.