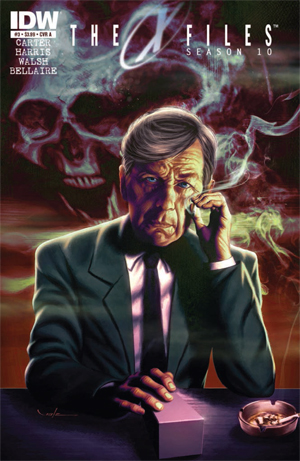 We’re excited; it must be Wednesday, and a new issue of The X-Files: Season 10 is out. Story by Chris Carter and Joe Harris, and penned by Harris himself, today’s is the third issue in the new series and continues the cliffhanger exposed in issue #2.

So far, the new comics have been greatly praised by both the comics community and X-philes alike, and the IDW panel at San Diego Comic Con was only one sign of how excited people are about these new stories.

If you haven’t read this month’s comic, we advise you that this review will be heavily filled with spoilers… so proceed with caution.

With the opening of this third issue, we confirm that the whole "X-Files" team has been compromised; currently, Agent Doggett and Scully are missing and now Agent Reyes and Agent Hendricks are also in danger.

While visiting Wyoming, they’re met by the Van de Kamps who refuse to give any information about William. The agents are suspicious since the school informed them that William hasn’t been in attendance for weeks. While going through the property, they make a grisly discovery; William’s real adoptive parents are dead and now the agents are about to follow the same fate, as members of the Acolytes reveal themselves and attack.

Following last month’s cliffhanger, the story continues as Spender, the Cigarette Smoking Man, pays a visit to Fox Mulder. In obvious shock, Mulder finds himself in an outrageous conversation with a man he thought dead. While CSM doesn’t explain why and how is he alive, he informs him that the Acolytes are the ones that have kidnapped Scully, and proceeds to explain to Mulder the purpose of this faction.

The objective has shifted for those that hope to remain in power when the alien colonization begins; it is no longer about stopping them, but how to be ready for their arrival and ensure survival. Whoever controls the magnetite will have the ability to hold all the cards; the pipeline introduced in issue #2 will be of great importance.

Meanwhile, Scully finds herself escaping through the middle of the wilderness with the aid of one of the members of this faction. They advance along the pipeline which has been debilitating Scully’s rogue rescuer because of the effects of the mineral on his “alien” composition. In a confrontation, he reveals that William “is the future they’re fighting for,” but the meaning of this statement will have to be explained in following issues as the reveal is interrupted when other members of the faction attack them. Scully fends them off by spraying them with the magnetite from the pipeline.

CSM’s confrontation with Mulder finishes as he proposes that they unite with fellow enemies of the faction. CSM leaves a present behind that will act as part of the cliffhanger for next issue. Mulder is preparing to leave for Wyoming, to look for William and Scully, when he receives a call from Skinner. Skinner followed up on the blood drawn from Emily Van de Kamp, and it’s revealed that the transport carrying the specimen has been in a car accident. The reasons behind the wreck might be unknown to the untrained eye, but as Mulder discovers the familiar stiletto pick, we can only guess that the shape shifter aliens are involved in this story as well. 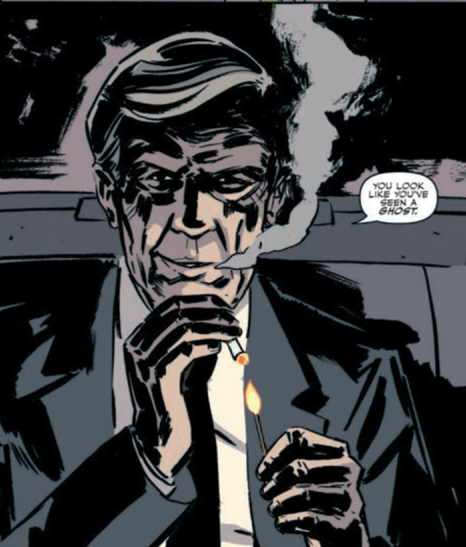 What do we think about issue #3?

We’re certainly excited that all of the players are in the game now. The stakes are definitely raised when so many members of the team are in danger and new details of the conspiracy have been revealed. Spender’s return is as questionable as the Lone Gunmen’s presence carrying over from issue #2 but we’ve already learned how they managed to stay hidden and alive. We can’t wait to learn how is that Spender survived his demise in the last episode of the TV show.

I believe that the exchanges between CSM and Mulder are great; Joe Harris did a great job capturing the climbing animosity and contempt that were always part of the scenes between these two characters, including the sinister tone that was a staple of CSM’s revelations.

In terms of how this story continues to be told, I think this issue has been my favorite so far. I am particularly pleased with how Harris managed to narrate both Scully’s fight and Mulder’s conversation in a very smart way, informing each situation effectively.

If you haven’t bought this issue, don’t wait too long. Comic book stores report excellent sales and there are just limited quantities for the four differentl covers, all beautifully drawn by Carlos Valenzuela.