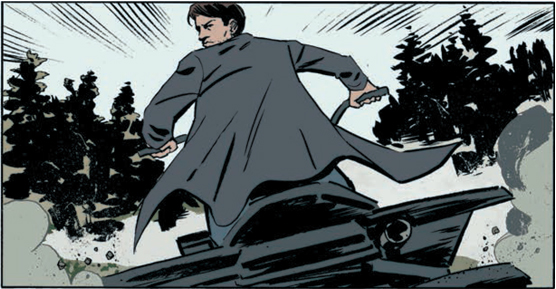 I want to make sure that if you’re reading this review of The X-Files: Season 10 – Issue #4, you have already gone and read it yourself. You have? Yes? Phew, okay, because it’s about to get really “spoilerific” from now on.

I’ll begin my review by talking about the fantastic and varied work that the artists commissioned to develop these covers have been doing. Carlos Valenzuela never disappoints with his artistry to portray the likes of Gillian Anderson with a lot of detail, and neither does Nick Percival, with a composition that captures the subtext of Mulder’s emotional state. This month we also have a fantastic rendition by the Sharp Brothers of the whole X-Files gang being chased by the Great Mutato from The Post Modern Prometheus in Scooby Doo fashion.

One thing is certain about these comics; the people involved are surely having a lot of fun.

If you have been following the series, this is the fourth part out of five in the first case to be developed in this new season. “Believers” tackles the mythology of the show upfront and personal, and in this issue the stakes keep on climbing.

To recap from the previous issues: the acolytes have kidnapped Scully, killed the Van de Kamps, and attacked John Doggett and Monica Reyes. The acolytes are a mysterious faction that possesses supernatural abilities and they are after William, Scully & Mulder’s son; his whereabouts are unknown. “Luckily” for Scully, one of the acolytes has decided to break free from his peers and escapes with her, but not without a cost to him since he ends up getting injured by the nearby presence of Magnetite.

What do we discover in issue #4?

Does this sound confusing? Maybe, but then again, you should be reading this comic and enjoying the fantastic job that Joe Harris and everyone at IDW publishing is doing creating a world where paranoia and conspiracies coexist in a spectacular way.

If reading this review doesn’t make you run to your nearest retailer, the fact that Issue #1 of the series is currently on its 4th reprint should speak volumes about the impressive reception that it has had.

But back to issue #4; it starts off with a flash-forward teaser that very well reminded me of the corn crop chase in Fight The Future, but this time in the thick of the forest. In this very exciting chase, Mulder and Scully are looking for each other as well, running away from black helicopters and through columns of evergreens. I sincerely couldn’t stop the imagery this brought into my filmmaking brain, and it was beautiful.

I had many favorite moments while reading this issue, and it is very hard to compartmentalize and rationalize away from the excitement of having new Mulder and Scully stories told to you, but the truth is that I keep being blown away by the capacity that Harris has to write these characters, especially Scully. Mulder feels a lot more integral in this issue than in previous ones, which makes the flow of the dialogue natural and robust.

The sequence where Scully is trapped in the car with the shape shifter strikes me as the most refined in terms of how this situation has affected her on a psychological level, manipulating her and pushing the right buttons to make her cave. Not only do they manage to present an important part of the plot in an artful and economical way, but they also give themselves the luxury of utilizing classic X-Files narrative tools that will call out to every X-Phile. The way that Scully responds to this situation rings true to the person that Scully would have become over the years, with the fierce resolution to not let herself be neutralized by her emotions and to keep pushing forward.

The last scene, which takes place in the woods back where this issue opens, it’s still not resolved and is a great cliffhanger for issue #5. The scene is quite charged, heightened with all the suspense and emotional build up coming from the montage of the previous scenes. In an angst-filled gun battle and a following encounter, Scully might or might not have wounded her partner in a very clever deceit orchestrated by the acolytes. The way this is told is very rich, supported heavily by a visual language that continues to be very cinematic. Amazing props go to Michael Walsh on this one.

Personally, I can’t wait for the last part of this storyline. Not only because I’m dying to know what happens after this huge cliffhanger, but because it’s almost a challenge to see how Joe Harris will manage to bring the seeds planted to come to fruition in just one issue… or so we hope! But then again, this is The X-Files, and in true to its style fashion, a lot may be left to our imagination.

I leave you with what I believe was the best line of the whole issue: “The Truth belongs to whomever shines the brightest light!”

The X-Files: Season 10 – Believers 4 of 5 is available through most comic book retailers and through digital media on Comixology.