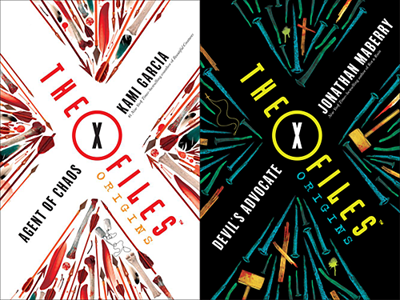 “I need you to read these books urgently because I have feelings and I need to discuss them at length.”

That’s what I texted to one of the other XFN staffers a few seconds after finishing the second of the two X-Files young adult novels published this week. "Agent of Chaos" by Kami Garcia stars a 17-year-old Fox Mulder, and "Devil’s’ Advocate" by Jonathan Maberry, a 15-year-old Dana Scully. Both take place over the same week in the spring of 1979 and follow the two teens as they attempt to uncover the truth about two separate waves of local crime that are hitting too close to home. Read on for our review of both and a chance to win a copy of each for yourself.

On first hearing that novels would be published featuring our beloved X-Files agents as teenagers, I found myself conflicted. As well as being a die-hard Phile, I am also lover of YA novels so learning that the two would be combined was deeply exciting. That being said, I’m always wary of anything that plans to go back and adjust the history of existing characters, especially ones like Mulder and Scully who come to the table with so much pre-existing backstory. It’s all too easy for mistakes to be made and small things to be overlooked, creating conflicts within the history. And so, it was with much trepidation that I finally cracked open the covers and began to read. I started out with Mulder’s book - "Agent of Chaos" - for no real reason beyond wanting to save Scully’s for last, she is my favourite character after all. However, after reading both I was pleased to have chosen to read in the order I did.

Mulder’s novel sees young Fox recently transposed to Washington, D.C. where he lives with his distant father. The book is set over five years after the abduction of Samantha and the years of tension and family stress have long since taken their toll. Mrs. Mulder is described as living on the knife-edge of breakdown back in Martha’s Vineyard, while Fox and his father share space with a minimum of interaction. The conversations that do occur being taut and uncomfortable for both parties. Mulder has recently befriended Gimble, another young man with a troubled past. Gimble’s mother died when her car plunged off a bridge, sending his ex-military father into a spiralling breakdown of his own which has him convinced that he has uncovered a vast conspiracy which links together dozens of local murders and connects them all to a book - the 1965 novel "Storm Bringer," third in Michael Moorcock’s Elric of Melnibone series.

Of course, it doesn’t take long for Fox to develop a bond with his friend’s seemingly deranged father. He finds himself jogging past a crime scene and inadvertently spotting a clue that ties the death of the small child found there to another recent kidnapping and becomes instantly obsessed with linking it all together; the local murders Gimble’s father is obsessed with, multiple child abductions, and possibly even Samantha’s disappearance. It all culminates with the young Mulder, Gimble, and their friend Phoebe driving out to rural Maryland to help crack the case themselves - parental permission be damned.

This is the Mulder we all know and love, but subtly changed to reflect his younger years. Here we see him unchanneled, filled with passion and determination but with no outlet which leads him to rush into things and obsess over them even more so than his adult self. His frustration with his current lack or resources and credibility is palpable and it’s easy to see the path that leads him from these events to the FBI basement. There’s a nice scattering of little references that only fans will pick up on too, Mrs. Mulder’s complaint about her broken vacuum and the author of Gimble’s favourite D&D fanzine being two that particularly stood out. There are problems too of course. Fox’s BFF Phoebe came across as far too much a Manic Pixie Dream Girl character, and for a book that constantly expounds that “there are no coincidences,” there’s a fairly enormous one at the mid-point that advances that plot along hugely. However, none of the issues were big enough to detract from the overall story.

Scully’s tale - "Devil’s Advocate" - also sees her having recently moved, in her case from California to a tiny town in rural Maryland, where she finds herself struggling to fit in. What doesn’t help are the dreams she keeps having, horrifying visions of an angel who whispers to her in the darkness. When a girl in her high school is killed in a car crash, Dana learns that the incident is only one of many, with several teens from their school and a neighbouring one dying in supposedly drug-related crashes. But it’s when she has a terrifying vision of the dead girl exhibiting stigmata in the school locker room that Dana really begins to get involved.

Melissa introduces Dana to a nearby shop and spiritual sanctuary where she begins learning to expand her growing psychic powers. Dana’s dreams begin to increase in strength and become increasingly terrifying as she catches glimpses that show her how the “car crash” deaths and her angelic visions might be linked, and how she herself is now at risk. But this is The X-Files and there is always more to it than it first seems, as we soon learn from the Men in Black who watch over this little town and all the people who live there.

Overall, I preferred Scully’s story to Mulder’s, although there was little to choose between the two. At first, I struggled to see how this fifteen-year-old girl experimenting with yoga and burning incense in her bedroom to help open her mind could ever become the skeptical, science loving woman we see on the show. As the story progressed, however, Dana’s character grew and shifted before my eyes into a person I increasingly recognised. As with Mulder’s story there were several small references slipped in for fans, but Scully’s story did away with the enormous leaps of coincidence the other book relied on in much the same way Scully’s own case solving skills relied more on logical steps over Mulder’s wild leaps. In fact, reading Devil’s Advocate actually changed my perspective on Agent of Chaos fairly significantly and made me want to read it again with some new ideas in place.

These are two fantastic books that really add a lot to the X-Files canon and do what all X-Files stories do best, create more questions than they answer. I have dozens of questions after reading them, especially regarding one specific character who I now believe knows more than we ever realised they did. I personally recommend reading the two in the same order that I read them in, although I would be very interested to hear people’s opinions on reading them the other way around. I hope we will see more of these books in the future, as I would definitely like to read more about my favourite agents as teens - or perhaps college students - and see what else they might have gotten up to in the past.

Ready to read about teen Mulder and Scully for yourself? Courtesy of Macmillan Publishing, we have a two-book set containing copies of both "Agent of Chaos" and "Devil’s Advocate" to give away to one lucky winner. To be in with a chance of winning, simply answer this question:

What LP did a young Dana Scully once hope to find under her tree on Christmas Day?

Email your answer and shipping address to: This email address is being protected from spambots. You need JavaScript enabled to view it.

You have until 11.59PM PST on Sunday, January 15th 2017 to submit your answer. One entry per email address, US and Canada addresses only. We’ll choose one winner. Good luck!