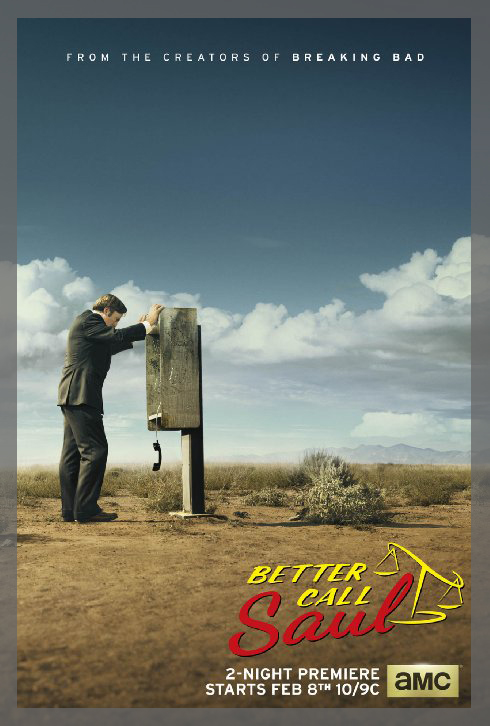 With episode two of Better Call Saul, the path that leads Jimmy McGill to becoming his alter ego Saul Goodman seems to be all laid out; the stage has been set. Though the show draws heavily on the style and aesthetic of Breaking Bad, it's become clear that while the characters of Jimmy and Walter might share some of the same acquaintances and locations in the story of how they became the anti-hero, this is where their paths diverge.

Taken by itself, "Mijo" might leave some a little underwhelmed, but watched together with the pilot, the two episodes form a cohesive whole and the perfect setup for Jimmy's journey. If you're looking for Breaking Bad: Part Two this might not be the show for you. However, if you're looking for great storytelling in the style of Breaking Bad, well, welcome to your new favorite show.

Hit the jump for the full review and recap. As always, ahead there be spoilers! You've been warned.

Tonight's episode picks up just previous to where last night's left off. The skaters enter, yelling at grandma and Tuco (Raymond Cruz), completely unaware of the predicament they have put themselves in. I cringed my way through the whole scene, loving every minute, as the dudes up their shtick while Tuco quietly fumes. All hope is lost for the pair of idiots when they have the nerve to call grandma "biznatch". I can't say I was particularly sorry when Tuco put them in their places by way of his abuelita's handily located walking cane.

I particularly enjoyed the juxtaposition of Tuco's loving care toward his grandma in this scene, and his later, certifiable glee while meting out justice in the desert. The dash of humanity, played aginst Tuco's brutality, while over the top, is the very reason millions kept coming back for more during Breaking Bad's run. These are the characters we love to hate. Or hate to love.

Jimmy soon shows up at the door while Tuco is removing the evidence, all the while assuring his grandma that the stain is simply salsa.

Aw, when he's not breaking legs and wielding gigantic guns, this guy is a real teddy bear.

He ushers Jimmy in and the two sit down to talk. In reality, Jimmy talks. A lot. And this might be his saving grace. Tuco seems baffled by Jimmy's rambling and eventually takes Jimmy to the garage where the skaters are being held, thankfully, not dead. Yet.

Unfortunately for Jimmy and his good intentions, the brothers being alive might not be such a good thing. Just as he's about cut them free, Frick (or Frack, your choice) decides to talk, blaming the entire charade on Jimmy. It's not at all untrue, but still, dude! Jimmy just saved your bacon!

With that revelation, it's off to the New Mexico desert, opening with a gorgeous wide shot reminiscent of Breaking Bad. Things are not looking good for Jimmy and the boys. 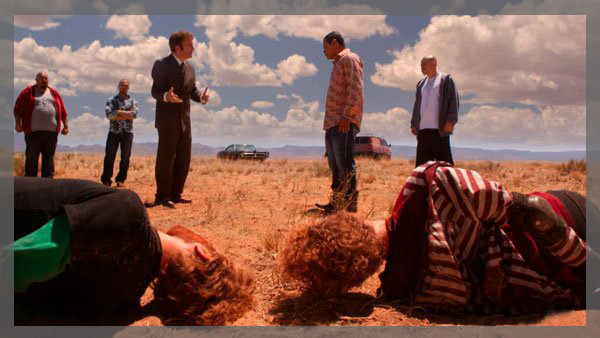 I do have to note that this scene was a little off-putting, not because of the content, although we'll discuss that in a second, but because of the lighting and editing of the clips, which were, somewhat obviously, filmed at different times of the day. Separately, the coloring was gorgeous. Taken as a whole, I got a little case of whiplash. I digress. Moving back to the story...

What follows is probably the best scene of the episode, where we really get a good look at what makes Jimmy tick, and how he's going to deal with dubious situations in the future. Breaking Bad fans are also treated to a cameo by No-Doze and Gonzo. Again, Jimmy attempts to talk his way out of the spot he's gotten himself into, trying various tales, all with different but equally inadequate results. Though he's not really getting anywhere, he's buying himself time; Tuco is out for blood, and Jimmy needs a miracle.

"Croaking a lawyer is bad business," Nacho persuades Tuco, bringing him down from a self-satisfied high regarding Jimmy's latest tale of being an FBI agent working on "Operation Kingbreaker". Tuco eventually, if halfheartedly, agrees.

Jimmy is free to go, and both the Saul we know and Walter White would have taken the opportunity and ran. For a moment, it looks like Jimmy will, too. After some deliberation, he instead puts his storytelling skills to the test, relying on Tuco's love for his grandmother to try and free Frick and Frack.

Even season one Walter would have had a hard time doing that. His sociopathic tendencies were clear fairly early on, and I feel like this scene in particular drives home how different their paths will be and why you should be watching Better Call Saul as an entirely independent show that just happens to have a familiar backdrop. Think of the many nods to Breaking Bad as a garnish, sprinkled artfully on top of the main course.

"Make the punishment fit the crime," Jimmy contends, before adding, "An eye for an eye."

"You want me to blind them?" he asks with much glee, and Jimmy quickly changes his tack, instead appealing to Tuco's reasonable side.

Side note: I'm not sure that's actually a thing when talking about Tuco.

"You're tough, but fair. You're all about justice," Jimmy appeals. Thankfully for the skaters, it seems to work, and after much negotiating about how much justice Tuco should deliver, it's agreed that each brother will have one leg broken. While we don't actually watch the legs being broken, the sound effects and Odenkirk's reactions are more than enough to make you cringe and feel a little nauseous.

At the hospital now, and Jimmy is rushing to get the brothers checked in to have their legs repaired. It's another nod to Jimmy's still intact morality. I have a feeling Saul Goodman wouldn't have made the effort. But the brothers are none too pleased with him.

"I just talked you down from a death sentence to six months probation," he says to the brothers. "I am the best lawyer ever!"

I have to say, at this moment, I tend to agree.

Next up, Jimmy is on a date. The scene is slick, and almost uncomfortably long; there's no dialogue. Lively music swells (Esquivel – "Boulevard of Broken Dreams") while Jimmy is slowly distracted form his date and his attention is drawn to another patron, snapping breadsticks and reminding Jimmy of broken legs. The scene ends with Jimmy barfing in the men's room. Much as Jimmy is trying to be Saul, he's not quite there yet, and he's clearly affected by what he witnessed in the desert. I'm not entirely sold on this scene. While it served its purpose, it took up a lot of time, and I feel like the next scene managed to convey the same point, only better.

Jimmy ends up at Chuck's house, staggering drunk and passing out on the couch. Chuck is not amused. Jimmy doesn't ground himself and brings his cell phone into the house. Chuck also notices the bill for the skateboarders' emergency room visit. Big brother is clearly not amused by his younger sibling's antics. Michael McKean plays this scene perfectly, and I find myself questioning my previous certainty that Chuck is nuts. Maybe he really is suffering from "electromagnetic hypersensitivity". Maybe Jimmy really is a jerk. 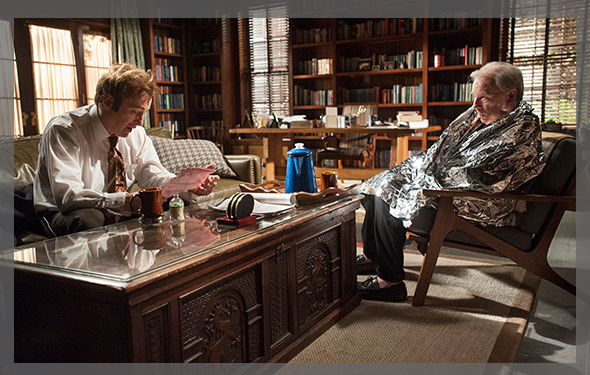 "I'm not backsliding. This isn't Slippin' Jimmy," he swears to Chuck in the morning.

Chuck wraps himself tight with a space blanket and lays the guilt on thick. I'm again leaning toward completely nuts for Chuck. I'm also going to add manipulative weasel.

It seems the outing to the desert, the heavy bender, and his trip to Guilt City with Chuck has made Jimmy a renewed man. He bribes the court officer he pissed off last episode with a stuffed animal and resumes his role of public defender, now representing his clients with vigor.

The ensuing montage is nothing but pure gold. Unfortunately, it doesn't work out too well for Jimmy. He returns to his shabby office, dejected, ready for a drink, and still painfully free of any voice-messages or new, well-paying clients.

It looks like he's preparing for another bender, this time in his tattered sofa bed, when the owner of the nail salon informs his that he has a customer.

Jimmy quickly dresses up his office as best he can. Regrettably, said customer is Nacho and he has a proposal for Jimmy: If he helps Nacho rip off the Kettlemans, he'll give him a ten percent finder's fee.

I have to admit that if I were Jimmy, I'd probably take the deal. But Jimmy isn't down for it; the man is sticking to his morals, unclear as they may be.

"I just wanted their business. I'm a lawyer, not a criminal," he insists.

But really, it's too late for that. Despite any good intentions, his path has been set. He's done too much, seen too much, knows too much.

"For when you realize you're in the game," Nacho says, writing his number down on Jimmy's matchbook.

And thus, episode two ends. Jimmy isn't of it aware yet, but it's obvious that yes, he really is in the game.