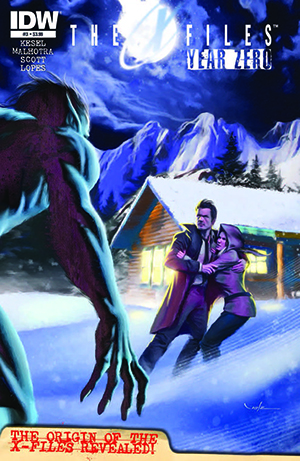 The X-Files: Year Zero, issue #3, delivers the goods again this month, with gorgeous artwork and a storyline that keeps the pages turning.

We learn a little more about the mysterious Zero/Xero, and a lot more about the Manitou/wolfbeast threatening to take out our 1940's heroes when we last visited this story. With Mulder at his snarky, and Scully at her skeptical, best, this series continues to be one of my favorites.

Read on for the spoiler-filled recap after the jump.

Issue three picks right back up from where we left the action last time, with the beast about to attack and our 40's agents, who are in trouble while trying to protect Ish. Millie has hurt her shooting arm and Bing has lost his gun, Mulder-style. The kid makes a valiant effort to save the agents, but luckily we learn that Miss Ohio is just as handy with her left hand as she is with her right, taking a few good shots at the werewolf before gunfire rains in from outside. The trigger-happy local PD has arrived to save the day, much to the agent's chagrin.

Narrowly escaping their untimely demise, it's discovered that it's not the body of a wolf in the cabin, but instead the freshly-dead corpse of Dick Watkins, the missing local who Ish said he had witnessed having his spirit taken over by the Manitou in last month's issue. As is to be expected, the police brush it off, claiming the werewolf has escaped. Ish warns the agents they will be changed forever, and Millie receives yet another letter from Xero. A letter that arrived four days ago. On the plus side, the trigger-happy lawman has been relieved of his badge and gun, and we end the first act with Millie and Bing having a conversation in the car, bringing back warm and fuzzy Mulder and Scully memories.

Back to the future, and Mulder and Scully are still in New Jersey, at the animal shelter, trying to convince Mr. Spoon that Zero is out to do him harm. Unfortunately Spoon's not buying it, instead insisting that Zero is just trying to help and believing that he's simply in control of some kind of benevolent psychic abilities. Scully's skeptibrow™ must take a backseat though when they are interrupted by the owner of the dog that Mr. Spoon has been taking care of. A heated discussion full of veiled implications ensues between the two before Mulder and Scully can get back to the task at hand: Asking Mr. Spoon whether he knows anything about Dorothy Sears, Xero's 'friend' from the 40s. Naturally, he doesn't.

Transitioning back to the 40s, the Assistant Director of the FBI, Carver, isn't particularly thrillled with Bing and Millie. It's a scene reminiscent of many a meeting with Skinner in the X-Files and ends with Bing securing their jobs for at least another day.

The two head off to Dorothy's house, only to be informed by some nosy neighbours that she's been missing for a few days. Not one to look a 'gift open window' in the mouth, Bing suggests Millie hops on through it and lets them both in for a looksee. He's a real charmer, our Special Agent Bing. Millie gives him a glare worthy of Scully and the two have a good poke around the house. Millie finds a bucket list of sorts and the two are just beginning to poke through it when in a flash of blinding white light, Dorothy appears on the couch. She claims to have gone for a joyride on Mr Xero's spaceship. Her happy tale is interrupted by a phone call. It's Mr Xero, and he's calling to threaten the three of them. He wants them to get to work on his latest letter and bears an evil, pointy-toothed grin before we fade back to the present day.

Mulder and Scully are staked out, outside Dell Spoon's house, discussing Zero's motives and past incarnations, when they are distracted by a bright light coming from inside his house. The agents rush from the car and Mulder, in a fit of manliness, kicks down the door, only to find that it's in fact Spoon's television making the light and that he's in no danger whatsoever. However.... he's got company. Zero is reclined in the living room and he wants to talk.

Unfortunately for Dell Spoon, it's his death that Zero wants to discuss. And on that cliffhanger, we end this installment of The X-Files: Year Zero.

I thought the story flowed really well in this episode. Karl Kesel continues to weave the two storylines without making the time jumps jarring and I'm just as eager to see where the dynamic duos go next issue as I was when this journey began.

As for the art, I thought it was perhaps a little less spot-on this time around with some depictions of Millie being too 'Scully-like' and some depictions of Scully being too much like they were ripped directly from an episode of the television series. The latter, especially, pulled me out of the story a little bit while I oohed and ahhed and tried to remember what episode I knew that look from, but on the whole, the art in this series is gorgeous and I can forgive Greg Scott and Vic Malhotra these slight indiscretions.

The colors are beautiful as always and continue with the slightly different look for each era. Mat Lopes does a great job. The lettering is by Robbie Robbins, editing by Denton J Tipton, and as always, the series is executive produced by Chris Carter.

Onto the covers! The regular cover is by Carlos Valenzuela and features Bing and Millie cowering before the beast. It's dark and creepy and sets a great tone. My love this issue though, goes to the subscription cover with art by Robert Hack and colors by Stephen Downer. I can't get enough of the hard-boiled style covers and I want them all as full size posters for my yet to be materialized writer's room. 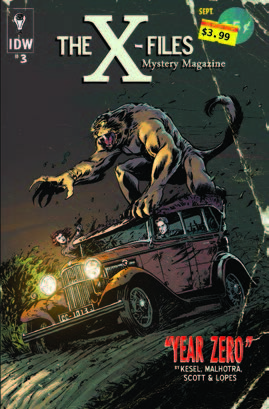 The X-Files: Year Zero, Issue #3, is available in stores on October 1, 2014. Head on down to your local comic book store and reserve yourself a copy, or head on over to Comixology for a digital version. You can let IDW know what you think by contacting them at This email address is being protected from spambots. You need JavaScript enabled to view it.. Remember to title the subject as 'Okay to publish' if you'd like it to appear in future issues.