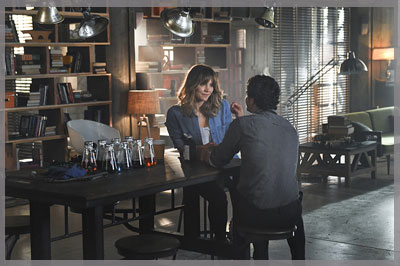 Written by David Foster and Directed by Bobby Roth, Scorpion’s “Single Point of Failure” gives us a peek into the Scorpion universe before this group of justice seekers was even close to becoming a reality. It continues to give us a glimpse of the benefits and resulting issues that being a genius can bring upon a person. In its second episode, Scorpion continues to deliver on the great start the pilot setup for this new team.

Going back to Callan, Ireland in 1994, Walter O’Brien (Elyes Gabel) was already showing the astounding capacity he has to look at situations and people in a different way. Of course, not everyone was appreciative of his gift, especially authority figures such as his teachers. Thankfully, he had his sister Megan to defend him from painful repercussions, and this is a bond that doesn’t come lightly for Walter.

Today, Megan can’t be there for him as much as she once was, as the crippling effects of MS have her bound to a recovery home, and she’s worsening fast. Walter doesn’t share this information with the team, instead busying himself with business and caring for Ralph, Paige’s young genius son. Ralph’s taken a liking to him, trusting him, even with his limited ways of showing appreciation. Walter, right away, sees himself in this youngster, who has a disdain for school just like him and cheats his way of it, much to his mom’s chagrin. Walter explains that geniuses, especially the ones enabled with math proficiency, have a hard time fitting into standardized constraints. This brings him to give Ralph a trick to pass the time while at school that his sister taught him, revealing to Paige (Kat McPhee) that Megan exists and the strong significance in his life.

The Scorpion team is fully functional now in this second episode and with the diverse interaction, we have the luxury to get to know these characters a little better. In between witty banter we learn that Toby (Eddie Kaye Thomas) has a gambling problem triggered by stress and an ex-fiancee he can’t let go off. Paige has left her job as a waitress and is now enjoying the perks of being an active part of this team. These first scenes handle the presentation of these characters in a seamless way, not falling into obvious cliches, giving texture and depth to their lives, and describing their own internal woes and relationships.

The case to be tackled this week is one of great importance, as we suppose they all will be, since this team is out to save the world. Agent Gallo (Robert Patrick) has called them into the residence of California’s Governor Lane (Joel Gretsch), heavily surrounded by Security and a full team from the CDC. This triggers another “handicap” of this team: Sylvester (Ari Stidham) is a germophobe… and this will play out in an important way later in the episode.

The Governor’s daughter has been “Bio-Hacked” - a virus in her personal computer blames him for her sickness. The unknown illness that she’s been suffering has caused a full system failure that have the doctors predicting that she has less than 24 hours to live.

Walter manages to break the code to track the hacker, outrunning all the government agencies that have tried to figure it out. The attack was aimed at the girl with a purpose; it was a virus custom built to attack her, and only her.

It is up to Walter and his team to figure out what and who has attacked her, without raising suspicions to the general public that may cause mass hysteria, while battling resistance from the Governor to accept Walter’s outlandish theories. It is because of his “impoliticalness” that Paige shows her value in this team; she is in touch with her emotions and manages the empathy that a parent can feel, smoothing the rough edges and lack of finesse that Walter and company can have.

The team studies the Governor’s enemies and threats for anyone with the intelligence to pull off a stunt like this, where they’ve managed to custom build an illness for a particular individual. The frustrating process to save the girl has wounded Walter’s sensibilities, making him have an outburst that triggers Paige to address the situation, pressing him to share his emotions, and Megan’s story. He’s feeling cornered because he can’t cure her.

Thanks to Happy’s (Jadyn Wong) computer skills, they identify the source that’s masking the signal of the attacker, a hacker think tank in town, that has Agent Gallo leery of how the team knows of the existence of this place. Confronting the hacker that collaborated with the anonymous attacker, they learn that the Governor’s daughter is not the only victim, but so too are the children of his colleagues when he worked in VLAXCO, a pharmaceutical company. They had developed a drug that promised to cure SMA but that ultimately was discarded to develop an Asthma medication, hence abandoning the hopes for those that suffered from the disease.

A person affected by this illness in any way could be behind this, and this person had to be VERY intelligent to develop an attack like this.

The pharmaceutical company won’t release information of the people involved in the medical trials in time to save Helena, the Governor’s child, and Walter questions Agent Gallo’s commitment to push the envelop to get them to surrender that information. This is one of the many shining moments for Robert Patrick in this episode. Believe me, you didn’t want to be at the other end of that icy stare when he held his stance.

“Your trojan horse is a 2x1 sub coupon”

They decide to break into VLAXCO to steal the files that would help them identify this person out for vengeance. This puts Happy, Toby and Sylvester in a position where they have to face their own fears as they finagle a distraction and a way in and out of the building. This is all completed with a collection of witty puns and deceit that allow us to dig deeper into the personalities of these operatives. It is thrill-packed sequence that reminded me of any good spy movie out there and it tests Walter’s ability to remain a fair leader under pressure.

After evaluating the results of their break in, and with Gallo’s help, they find a fitting suspect from the VLAXCO trials: Robert Richter, a single father, and a Microbiology professor from the Venice College of Science who lost a child over the company cancelling the trials. The team first doubts that this is the subject because the motivation would be one based on purely on emotion, but Agent Gallo makes the point that this is one powerful motive for him to strike. Crimes of passion.

Richter studied spray patterns to design the contagion. They find in his computer a way to find antidotes for the victims and they send those to the CDC for their immediate treatment, but they also find an additional target: The Governor - And the illness designed for him will kill him immediately.

They manage to locate Richter as he’s about to accost the governor, saving him just in the nick of time and stopping the disease by activating the fire sprinklers within a populated mall. Scorpion has saved the day. 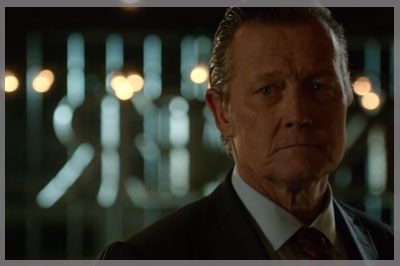 Keeping with the theme of this second episode, this is an opportunity to learn the backstory of one of these characters, and Agent Gallo has a compromising one as well, heart breaking enough to have him show a softer side of him upon interrogating Richter. It’s not just empathy for a sick child, “he knows how he feels...” and he’s living with that weight on his shoulders.

Considering all the badass