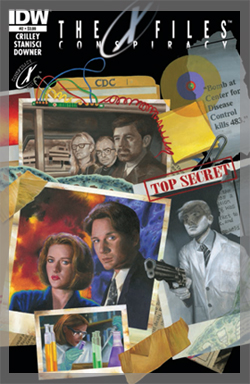 With the release of The X-Files: Conspiracy #2, IDW marks the end of this yearâ€™s crossover event that put us on a very entertaining journey, visiting the realities of The X-Files and Lone Gunmen, The Crow, Teenage Mutant Ninja Turtles, Transformers, and Ghostbusters.

The issue released today brings the story that began in January 2014 full circle, to where the Lone Gunmen received information from the future that a deadly virus would be making its way around to wipe out all of mankind. Their search for the truth and a cure not only involved the help of Mulder and Scully, but also scattered clues throughout the realities of the five franchises that crossed the tale.

Conspiracy #2 continues the jovial tone that this event has carried in the previous issues, but feels sturdier than the rest. It mixed effectively both the wrap-up of the story while also giving space to moments that are key to the characters.

Briefly, the Lone Gunmen have brought back all the clues and elements of their journey to Scully at the CDC. She sets up to complete the work to formulate a vaccine but thatâ€™s when the boys get wind of one of the last leaks from the file sent to them from the future. Thereâ€™s a bomb that will explode in the CDC building.

While they set about finding the explosives, Mulder has been following a lead that puts him straight toward the epicenter of the threat: a laboratory where the virus is being manufactured. There, he discovers that theyâ€™re the ones behind the bomb at the CDC and that they want to favor an Alien takeover. Mulder manages to save the day, and so the Gunmen, finding and deactivating the bomb, save humanity from quite the grim future.

As a final note, a parallel reality is presented to us; a past where the outcome is quite different and one that challenges the â€œnaturalâ€ way we appreciate the time and space continuum. Letâ€™s just say, you had better have an open mind to enjoy and bask in all the possibilities that those last panels present.

I really liked the way that Paul Crilley executed the most tense sequences of the story, mixing simultaneous action effectively and playing with the suspense greatly. One of my favorite moments was the resolution point where the Lone Gunmen allowed themselves to joke about their experience, and Mulderâ€™s hopeful reflective pause that filled them with hope. Likewise, the ending touched upon a universal question for those of us that love pondering alternate realities and I think there is infinite fodder for numerous ways this story could become a dynamic point of discussion amongst the readers.

The banter between the Gunmen was so well developed here that I could certainly hear their voices as I read; the story came full circle, cementing not only the elements borrowed from the guests but also the character that was such a signature for the Gunmen show. 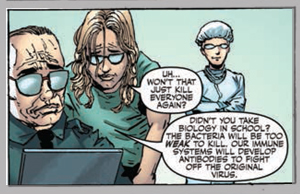 John Staniciâ€™s work is not my favorite but that could be my personal taste. Donâ€™t get me wrong, this style is original and well executed, I just donâ€™t think it was the one I would have personally chosen for the issue because it makes it hard to identify the characters at times or associate them with the actors that portrayed them. Depending on how you view this, it could actually be a good thing, since the characters become an entity of their own, but my stubborn standard made the differences an element of distraction to me.

In terms of the covers, I have to say that I found Andrew Currie and Stephen Downerâ€™s work on the subscription cover quite comical and spot on with the character of this issue. It is totally frame worthy and envelops all thatâ€™s good about the series.

As always, we invite you to rush over to your local comic store and purchase all the variants that are for sure collectible items, and if not, you can always purchase via Comixology. Will there be another event like this? We surely hope so, but in the mean time, continue enjoying The X-Files: Season 10 and the upcoming Annual that is soon to hit the shelves.