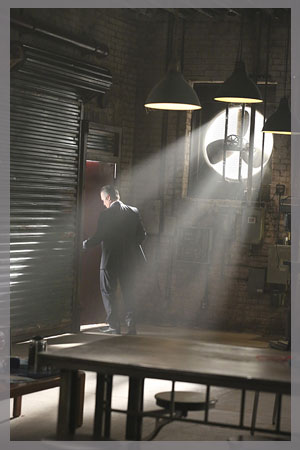 “A Cyclone” - the third episode this season, presents the team a crucial opportunity to prove their worth to the Government. Did they pass with flying colors? Were they amazing and genius like?

For those answers and our review, please click “Read more”.

If you’re following Scorpion, you should already know that this is a novel group of geniuses, commanded by Agent Gallo (Robert Patrick). They’re really smart, and I mean it, really smart… but that doesn’t necessarily mean that everyone is jumping at the chance to work with them or make best use of their abilities. They’ve been forced to prove their worth to the DOJ, and so Gallo takes them to an exercise at a Marine War Theater which puts them in a hostage situation and working under tremendous pressure. Unfortunately, their test doesn’t go well, as it triggers some of the team’s weak spots and they walk away with a very poor image of what they could bring to help defend the country. The Secretary of Defense doesn’t see the point of the existence of the Scorpion initiative and that upsets its biggest supporter, Homeland Security Agent Caleb Gallo.

Meanwhile, Paige (Kate McPhee) has finalized her resignation at her old job at the diner, making it her intention to help the group even when she doesn’t possess any “genius” abilities. She sees in it a chance to not only do something that is making a difference but also as a way to connect with her son and his own special abilities. The pressure is on for her to learn how to navigate raising a child that doesn’t fit into the cookie cutter mold. 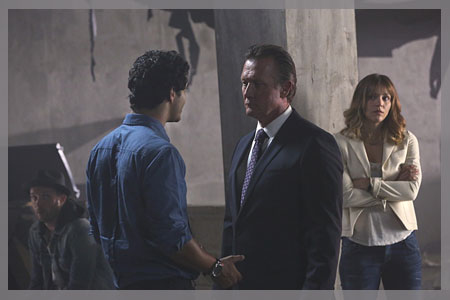 After the results of the War Theater exercise, Gallo gets chewed up by his superiors, upping the ante for Walter (Elyes Gabel) to try and prove their worth in any way possible. The biggest problem of the group, in his eyes, is that they’re self-destructive and when things don’t go their way, their tendency is to wallow in their shortcomings and vices. He thinks that this will be Paige’s biggest contribution to the team, as he thinks she can help them find center. The problem is that the team’s shortcomings are unknown to Paige so that makes it hard for her to help them.

As they’re decompressing from this situation, an explosion takes place at a building in Los Angeles. It has taken down vital parts of Internet infrastructure, and while the authorities seem to think it is a personal vendetta, Scorpion thinks that it’s terrorism. Gallo is not happy that they’re getting involved after the previous events but the team seems to think that this is the perfect opportunity to redeem themselves and find the bomber. Gallo accepts it, but gives Paige the responsibility of keeping them controlled. 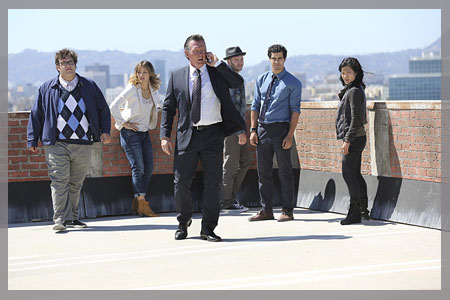 They manage to secure the internet to be back on for the cells that had been offline, but with a cost in time and a lot of money. They are able to isolate a suspect but they don’t yet have not enough to identify them. The government wants to take over, but Walter is frantic about finding the guy themselves; it would be a success that would secure their operation and would stem the worry about being shut down.

Visiting the location of the bombing, they manage to find a clue about their suspect that leads them to a bar in Downtown LA. There, Toby cons one the bartenders into spilling the beans on someone that might know the bomber. Paige is leery that they’re going too far, and this is seen as a bother to the team, as they question her purpose in their group. It seems that only Walter believes in her.

They follow through with their lead and build a makeshift surveillance microphone to spy on Frank Turner, the suspect. The guy makes them, and Happy (Jadyn Wong) takes off after him. The suspect pulls a gun on her, halting traffic and causing chaos that results in a bus running him over. This obviously is a plan that has backfired on them, now they won’t have the ability to interrogate him and the powers that be are extremely upset. To make things worse… they figure out that more bombs are planned to go off in Los Angeles: the first one was just a misfire. Chaos ensues very quickly.

In the midst of it all, Paige helps figure out the reasoning behind the location of one of the bombs and in doing so reclaims her place in the team that doubts her. Gallo launches an investigation to try to figure out which company is the target of these bombings, triggering a moment of brilliance by Walter. Someone has a secret stored online that they don’t want known… This is the motivation behind the attack, this person needs to erase any trace of their secret.

They set up to find the router that might have managed Frank Turner’s emails and the mind behind the bomb attacks. It is then that they learn that a member of the FSG, Thomas Kieler, has been behind it all. Happy discovers the right hub in Tarzana and they move to try and recover the files before Kieler gets a hold of them, but he has anticipated their move and has set a bomb directly above them.

Gallo and Sylvester (Ari Stidham) take off with the copy of the file to deliver it to the DOJ and leave the rest of the team to defuse the bomb and evacuate the building. In a spectacular car crash, Kieler intercepts them. Meanwhile, while Paige and Toby try to evacuate the building, and Happy and Walter manage to concoct a mixture with the components in the room that will contain the blast.

Gallo and Kieler battle it out in an impressive fight in an RV parking lot. This is quite the badass sequence, something worthy of the excitement that Robert Patrick is used to delivering, and it serves for the perfect opportunity for Sylvester to prove his worth to Gallo when he pulls a gun at Kieler, saving the day. Walter and Happy make it out just in time, but the servers are destroyed. Luckily, Sylvester had the foresight to memorize enough of the documents to be able to incriminate Kieler.

They’ve gone to great lengths to accomplish their objective but perhaps trust in each other is what’s lacking in this team, and this is exactly what Agent Gallo has in them. He confesses that he has put everything on the line for them, he believes in them and wants to make a change, “erase some red off his tab”. He trusts Walter to be able to deliver. 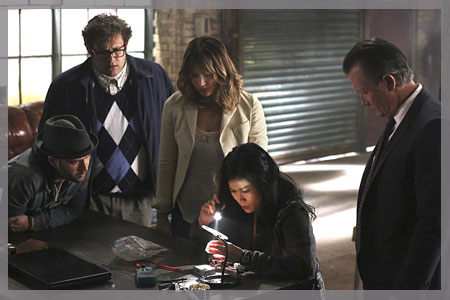 Throughout the episode, I couldn’t help but admire the understated tones that Robert Patrick has brought to his role, to build up the moment and then deliver a very deep and emotional message without it becoming melodramatic, making it pertinent and true to his character. He is indeed the father figure of this group, trusting them to do their best to save the world and themselves. He believes in their best potential and that’s why he takes anything that’s thrown their way, because he has found in them a very unorthodox sense of family… A family where everyone fits in, which is their recurring pursuit, even with their vast differences.

Another noteworthy plotline for me is Walter’s objectives. He’s clearly drawn to Paige, and quite ambitious about his need to have Scorpion’s abilities secured; we know from the previous episode that he has a personal stake in this fight as well, trying to cure his sister’s illness. I’m looking forward to seeing how the emotional handicap is handled when these situations, including the possible “Father-Son” conflicts between him and Agent Gallo that could start to surface.

In it’s third episode, the Scorpion cast has begun to settle comfortably into their characters. I feel very drawn to Happy’s storyline and I’d love to learn a lot more about her. As much as I love the boys (Toby, Sylvester & Walter), I want to see how the show’s writers will deal with the female characters. There’s a lot of potential in the differences between Paige and Happy, their motivations, what moves and empowers them, and how they make it work within a group where they’re the minority.

I’m very pleased with the reception this show has had. The ratings have been pretty solid and it’s quite fun to follow the show on Twitter during the airing of the episode. I invite you to give it a try. Also follow their feed for interactive games and trivia that are very enlightening.

Likewise, this humble reviewer enjoys live tweeting her own viewing, so if you’re in for a little more informal and fangirly version of this commentary, follow me at @AviQuijada.