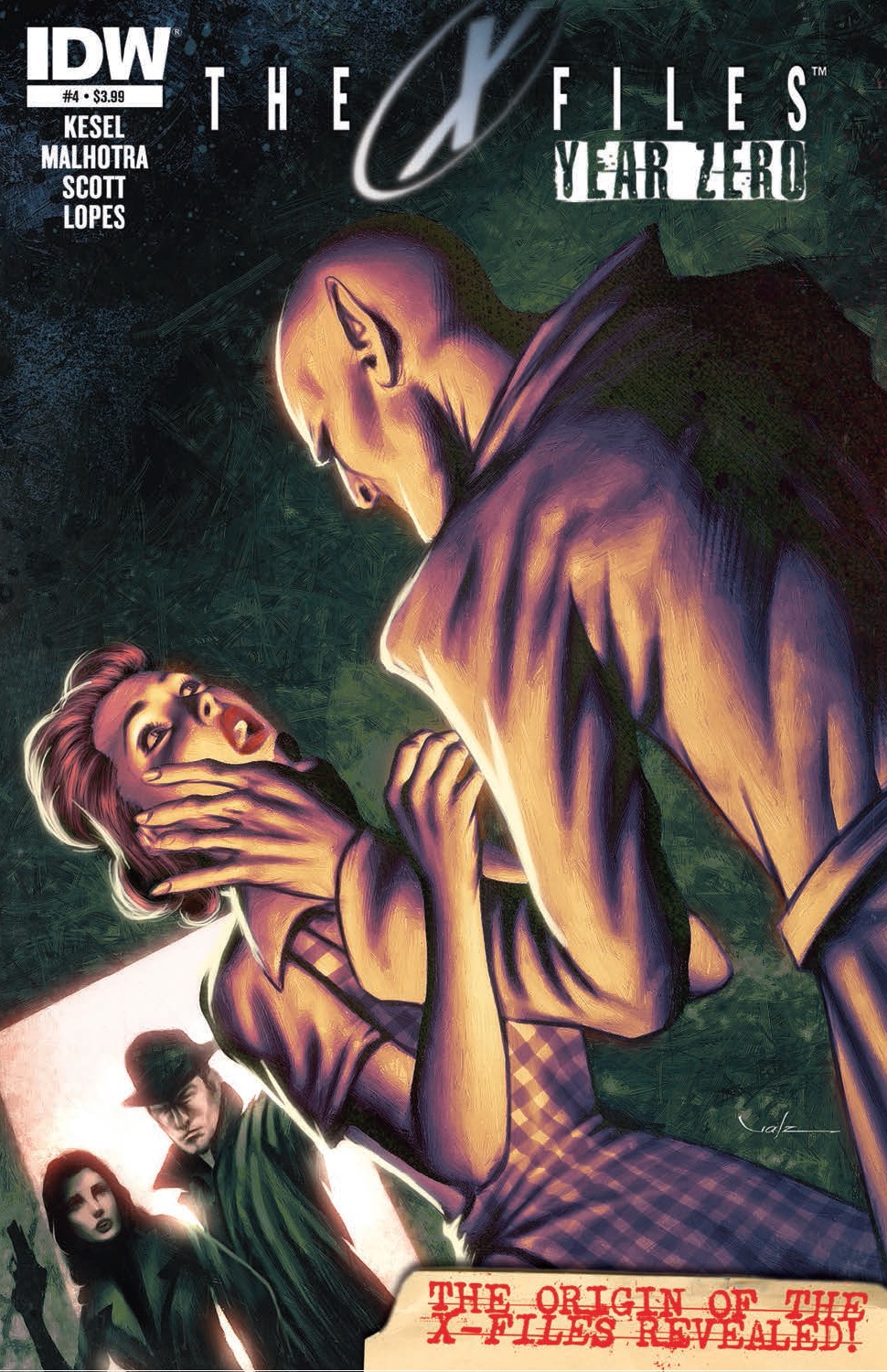 Issue #4 of The X-Files: Year Zero answers a couple of burning questions while raising quite a few more.

As we near the conclusion to this great series, I’m left salivating for more and hoping that Karl Kessel can pull all the loose threads together to form a satisfying whole.

Read on for the spoiler-filled recap and review.

In a departure from the norm, instead of opening where we left off, we instead catch up with our dynamic duo in the 40s as they sit with an upset Dorothy Sears. She’s afraid for her life, and with good reason. The night before she’d woken up to find Xero crouched at the end of her bed, watching her sleep. Yikes!

Here, ambrosiac is first mentioned and we learn that perhaps Dorothy has made a deal with the devil. Millie now believes that Mr. Xero now thinks he is owed something. Dorothy is insistent that she’s not going to give him what he wants, and Bing reminds her that they can’t lock up Xero just because of a bad feeling. Dorothy scoffs at the thought of locking Xero up but she does have something else for the agents. Xero has left his next riddle.

Humility Ohio (God, that name is still awfully awful) thinks the clue sounds familiar, and sure enough, she’s right. There’s an article in the previous days paper about a missing woman from Oyster Bay, New York. But here’s the kicker: The missing, and presumably dead, woman is a dead ringer for Dorothy. This isn’t just a tip for the agents; it’s a warning for Dorothy.

The duo sets off to Oyster Bay and Agent Ohio finagles her way into the interrogation room. As is to be expected, she’s met with a touch of scorn and a large heaping of misogyny from the suspect, the missing woman’s husband. It’s the 40s after all, and policing is men’s work. Millie soon sets him straight with an eyebrow worthy of Scully and a surprise guest. She’s brought Dorothy along for the ride and the show’s about to begin.

Eventually the husband cracks and Dorothy’s skills are proved to be legitimate.

Moving on, and it is New Years Eve, 1946. Bing and Millie are ringing in the New Year at Dorothy’s place as they watch over her. They discuss the case at Oyster Bay, lamenting the fact that though Ashland won’t be walking away from the murder, the body was never found and her family won't be getting any closure. Millie wonders if Xero had something to do with it but Dorothy doesn’t want to think about him, instead suggesting they try and have a little fun. It turns out though that these agents from the past have about as little a life as Mulder and Scully do; Bing’s missing out on being a mean drunk, and Millie’s missing out on a dress down by her Senator father. They offer a toast to a better New Year and that’s when things get freaky…

The agents lose time and Dorothy is missing!

The agents rush to their feet and make it to the kitchen just in time to witness Xero grabbing Dorothy. A struggle ensues and Bing takes Xero out. For a moment, it seems like Bing has sapped Xero of all his energy, but this guy is like a Timex watch; he takes a licking and keeps on ticking, soon bounding out the window and running away. Bing gives chase, and after checking on Dorothy, Millie joins in on the pursuit. She pulls out her trusty firearm and takes a shot, downing Xero so that Bing can catch up. After noting that though he’s hit, he’s not bleeding, Bing asks if he has any last words before being hauled to jail. Ever the charmer, Xero’s eyes turn red and he offers up some gibberish. Strange. While Bing and Millie try to figure out what the heck is going on, Dorothy’s house promptly goes boom!

It’s here that we leave the 40s agents and finally catch up to where we left off last issue. Mulder, Scully, Dell Spoon, and Zero are having a chat.

Quickly, we learn that Zero believes Dorothy is Dell’s mother, and that all these years later he’s still searching for her. Dell points out that Dorothy had supposedly died, decades before he was even born, but Zero is insistent that it was all a trick and that he’s not happy about it. Mulder perks up, it’s proof that Zero is one and the same as Xero and there’s a warrant out for his arrest. Zero all but admits that he’s the same guy, but he also points out that there’s no proof of him murdering anybody and is actually quite adamant that he didn’t. He goes on to say that the effects of the ambrosiac, mentioned earlier to Bing and Millie, would have made it so that Dorothy hasn’t aged a day, thus quelling Scully’s skeptibrow™ about Dorothy’s age and child-bearing abilities when Dell was born.

A quick ‘truth is out there’ pun and we learn that Dell is also gifted with psychic abilities, just like his supposed mother. Dell’s powers however, are focused on animals and not humans. As is to be expected, Scully’s brow raises high and Mulder wants to believe.

Zero points out that though a body was found in Dorothy’s house, it wasn’t necessarily Dorothy’s. Mulder thinks it’s convenient that the missing woman, whose body was never found, happened to look an awful lot like Dorothy. Dell wonders why if Zero is psychic himself, he’s bothering to try and find his mother through him? It’s a good point and Zero reveals that he has blind spots in his visions; Dorothy has learned to hide herself from him. There’s one thing that Zero can see though: he thinks someone is going to kill Dell. After today, he sees no future for Dell Spoon.

Scully asks why after all this time he even cares about Dorothy and Zero does his face-shifty-ugly-thingy and tells her that Dorothy made a deal and he intends to hold her to it. Mulder, in a case of perhaps very poor judgment, decides this is a perfect time for he and Scully to leave Dell in the care of Zero while they go on the hunt for Dorothy.

Over to the diner and the shifty waitress is chatting to the shifty artist from issue number two. They discuss Dell, who they both seems to love, and Zero, who neither of them are in a hurry to run into in a dark alley when…Ta-ting! The bell above the door rings and who should walk in but none other than Dorothy Sears, looking fine, and not a day over thirty. Dun dun dun!

Cut to the woods and Dell Spoon has come across a sick dog. He uses his powers to somehow touch the dog and restore him to health when he has a vision. It isn’t pretty. He sees the dog, angry and growing, and as he comes out of his haze, Dell decides he has to call the cops.

Not so fast though. Three men holding rifles surround Dell and the issue fades to black…

I thought this issue was the weakest so far in an otherwise great series. The dialogue was still good, the story still moved forward, and yet…. Something was missing. Perhaps the transitions from one time period to the next weren’t as smooth. I have nothing specific to gripe about and yet something didn’t quite sit right with me this time around. Perhaps, I just haven’t had enough sleep. That being said, this is still my favorite of all the X-Files comics and I look forward to the next issue and the conclusion to this great story.

Greg Scott and Vic Malhotra did a great job on the art, clearly marking the difference in time periods. I thought Dorothy was especially well depicted this issue and that her emotions were really brought out well on the page. The coloring was gorgeous as always.

There are two covers this month. The regular cover is by Carlos Valenzuela and is really striking. It features Bing and Millie walking in on a nefarious looking Xero who has Dorothy in his clutches. The subscription cover again wins my love though. It’s no secret that I am coveting all the hard-boiled covers in poster format and this one is no exception. With art by Robert Hack and colors by Stephen Downer, Mulder looks on while a werewolf holds a lifeless looking Scully. 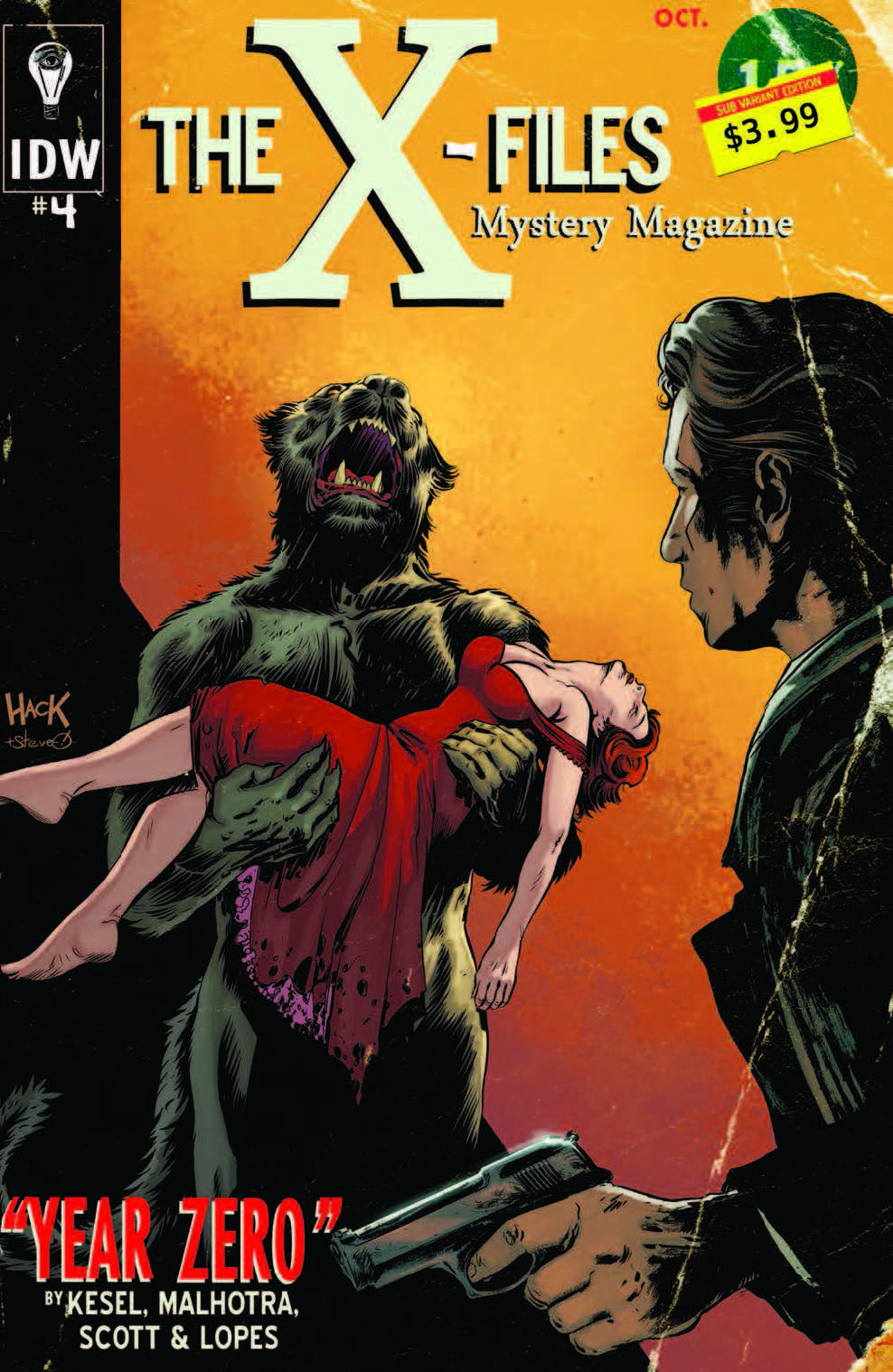 The X-Files: Year Zero, issue #4 is on sale now. Run down to your local dealer and pick up a copy or you can always head on over to Comixology for the digital version.