In “The X-Files: Year Zero”, our heroes are once again on the case, this time hot on the tail (hehe) of a shape-shifting cat. Or is it human? In this case, it’s a black leopard, but either way, it provides for some classic Mulder and Scully banter, leads us all the way back to 1946, and introduces us to some just as lovable new agents, Bing Ellison and Humility Ohio.

Year Zero is sure to satisfy both Philes and new readers alike. This issue, written true to character by Karl Kesel, is a solid first outing and well worth the read.

Take the jump and read on for the full spoilerific review:

We begin this story with the agents searching for a leopard in a dark warehouse. Amid the amusing banter, Mulder receives a text, and following his gut, he leads Scully through the warehouse. Naturally, the agents end up trapped, locked in a dead-end and about to become kitty chow, but just in the nick of time a zookeeper comes to their rescue, tranquilizing the cat and saving our dynamic duo. 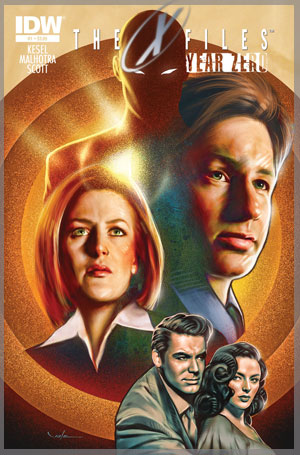 Realizing that the zookeeper didn’t sent the message, Mulder and Scully track down the real sender, an animal control agent named Dell Spoon, who reveals that he only did what he was told, and that there’ll be more leads to come.

And that’s where the real mystery in this issue begins. An enigmatic Mr. Zero is the man behind the text Mulder receives and he bears a striking resemblance, both in name and character to a Mr. Xero from the first official X-File.

As a side note, it’s here that we learn Mulder has made an X-Files app with the help of The Lone Gunmen. Raise your hand if you want it. I know I do.

It’s a smooth transition then, from the present-day car to a highway in New Mexico, circa 1946. Here we meet the rogue Special Agent, Bing Ellison, and Humility Ohio. Agent Ellison is just one more screw up away from a one-way ticket to the unemployment line, and Miss Ohio is your classic, underappreciated, 40s dame who just happens to be in possession of a letter which holds the key to solving a string of murders. With a little convincing, the director of the FBI agrees to name her “Special Employee” and after a little get-to-know-you banter, Mulder and Scully’s alter egos are on their way.

In suburban Long Island, New Jersey, the agents find the house belonging to the sender of Humility’s letter and arrive just in time to witness a ‘peeping tom’ dash away from the house like a flying squirrel. Here we meet Dorothy Sears, a housewife whose story is strikingly similar to present-day, Dell Spoon’s. We find out that the peeping tom/flying squirrel’s name is none other than … Mr. Xero!

The story is bookended nicely with a scene back in the car with Mulder and Scully who reveal that two months after Dorothy contacted the FBI, she was killed horribly by none other than her ‘good friend’, Mr Xero.

Now onto the technical details:

The artwork is by Greg Scott and Vic Malhotra, and both do a great job. Greg stays true to what we’ve all come to know and expect from Mulder and Scully in the ‘present day’ panels and the emotions really stand out. Meanwhile, Vic’s style is a little grittier and works perfectly to convey the ‘past’ in both characters and setting the scene.

On coloring is Mat Lopes and he lends a very dark, but pleasing tone to the issue.

Robbie Robbins is responsible for the lettering and all is done well. 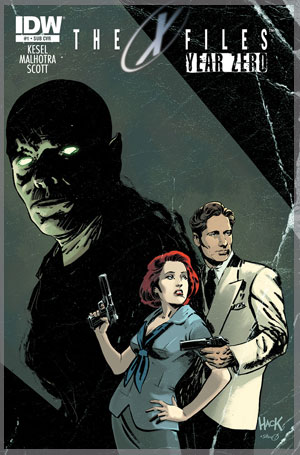 There are three covers for this issue. The regular cover is by Carlos Valenzuela. It features Mulder and Scully, Bing and Humility, and a menacing, faceless man. The coloring is very pretty and I enjoy this one. The RI is by Francesco Francavilla and is my least favorite of the three. It features Mulder and Scully, a full moon, and a gnarled tree, separated diagonally from a black and white rendering of a sinister looking man. The Subscription cover is hands-down my favorite and if you can get your hands it, you should. It resembles a pulp-fiction novel and features a 40s style Mulder and Scully and again, the mysterious man. The subscription cover is drawn by Robert Hack and colored by Stephen Downer.

We’d love to hear your thoughts on this issue, as would IDW. You can send them an email: This email address is being protected from spambots. You need JavaScript enabled to view it. (Make sure to put in the subject “OK to Print” if you would like it published)

As always, we encourage you to order your issues ahead of time from your local comic store or alternatively, download them in a digital format via Comixology.