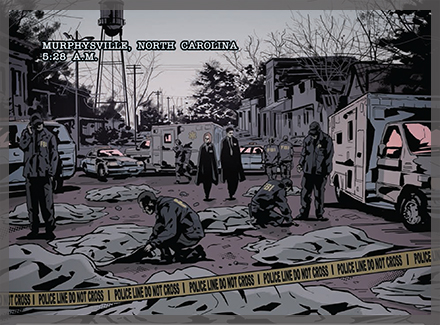 Is everyone ready for the newest installment of The X-Files: Season 10? Well, good, because this one comes with some surprises!

The X-Files: Season 10 #17 - Immaculate picks up from where the previous issue left off, after a huge massacre in the town of Murphysville, North Virginia.

A great number of residents of the town have been killed by their own neighbors, led by Joanie Cartwright, and there’s no pattern as to why some of the people were spared and welcomed into the commanding group. Mulder wants to organize a search party to find the group that shot the townsfolk. Scully is leery that this might not be just a simple shooting; there might be something else at hand and an autopsy might not give them the answers they need. Mulder jokes about what else can she do to help it, since she doesn’t have any psychic powers. Conveniently enough, that’s when it’s revealed to us that former FBI profiler and Millennium group member, Mr. Frank Black, has been following close. 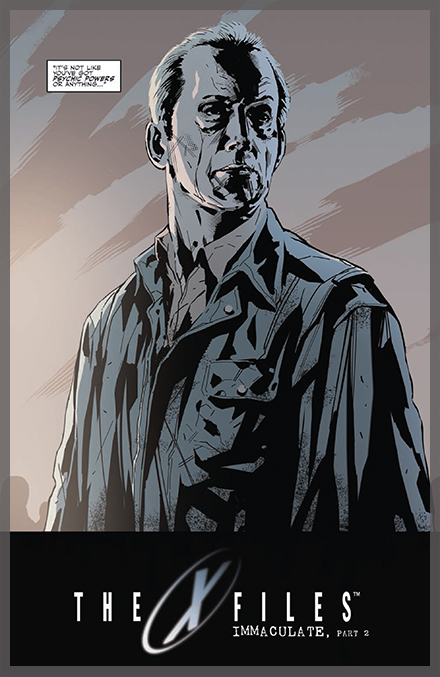 In the mean time, a group of residents have ensconced themselves in the Great Smoky Mountains. There, siblings Lucas and Sarah Beth camp out with Joanie and others. Lucas is scared to be without their mom. Sarah Beth approaches Joanie; they went to school together. She wants to know what this situation is about and the whereabouts of her mother, but Joanie only speaks to her in brief trance-like messages. She informs her that her mother is dead as she and some of her acquaintances start to summon a presence from the border of a cliff.

Back at the Cherokee County Medical Examiner, Scully has begun examining the victims. Past the bullet wounds and the damage they caused, she notes that these people were paralyzed on the spot when the attack happened; they were scared to death. As she’s about to continue, she hears something outside the autopsy bay. She finds a portfolio, filled with papers that seem to have information about Joanie. The leather case holds the very familiar ouroboros brand from the Millennium group.

Scully goes to Pastor Johns, the self appointed protector of The Cartwrights. The moment she shows the branded briefcase to him, he knows that he’s in for some unloading. 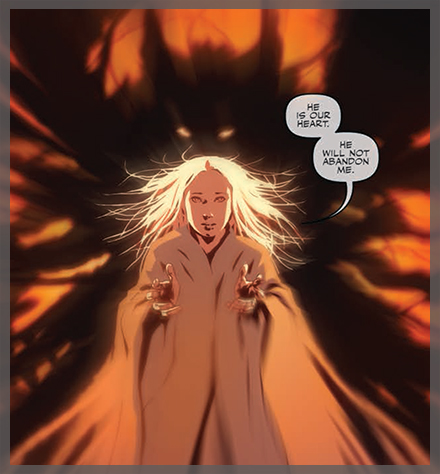 Mulder joins a strike team that will be surveying the mountains based on witness reports. He hasn’t heard from Scully in a while. Frank Black reveals himself to him, telling him that she’s seeking the truth, which is more than he’ll find by chasing the abortion clinic bomber. He doesn’t want him to go up the hill, he could make the situation worse. This is not a terrorism case, there’s a far more sinister force at play. They’re not hunting what they think they are hunting.

Black conducts a different type of “forensics” to study the case and as we know, Mulder is quite receptive to his psychic abilities and any paranormal take on this. Frank claims that after the standard investigation the FBI is carrying out, it will seem as if Joanie believed she was talking to god, though something else might be doing the listening. He assures Mulder that he’s no longer part of the Millennium group when he suggests that this case might have something to do with the shadowy organization.

Then, Sarah Beth comes running down the mountain, asking for help for Lucas. Something has happened; Joanie has manipulated everyone again, and many people have died.

Back at Johns’, Scully asks him if he knows that Joanie had had a previous abortion. He claims that he was aware but that he wasn’t in any position denounce her. But Scully’s suspicions are as simple as he probably hopes; she comments that the abortion clinic doesn’t have a record of paternity tests… and she wonders why he signed her off of school so many times. Let’s read between the lines. She leaves, promising that they’ll see each other soon. He denies her backhanded accusations, and is sure that Joanie won’t be able to either deny or verify a claim against him.

Mulder and Frank go after Joanie. They find her at the edge of the cliff and Mulder tries to talk her off the ledge but it’s too late. “He said he’d never leave me,” she says before diving off. Frank laments that the ones responsible for this tragedy might be too frightening even for Mulder.

Lucas has died, his appearance as frightened as the people that died in town. Scully calls Mulder to inform him that she’d need Joanie’s testimony to prove that Father Johns abused her. Mulder coyly informs her that it will be a tall order to get that one done. Scully can’t explain what has happened in this town; why they would claw their eyes out and die in such fear. Mulder is confident about taking Frank’s word and collaborating to solve this case, and even when Scully doubts it’s a good idea to mingle with the Millennium group, Mulder assures her that Frank Black is no longer associated with it.

In the mean time, Sarah Beth has snuck her way back to the town’s church. She hides in the shadows until Father Johns spots her figure and urges her to come closer. She does, suddenly frightening him, as she’s also been possessed. “He is come,” she says.

And so it begins. With the introduction of Frank Black, Joe Harris and IDW start teasing their newest release from the Ten Thirteen family - the new Millennium mini-series coming up in January.

The ending of "Immaculate" fits the dark universe that dominated the Millennium stories; it was often frightening and that shaped the dramatic lines that made Frank Black what he became. The mood set with his presence on the page is dead-on in characterization. I always thought, and this may be a very personal opinion, that when it came to Lance Henriksen being on screen, the pace and elements of a scene always became more contemplative. That came through on the page.

The X-Files aspect of this issue is quite clear as well, reminding me of episodes like "Signs and Wonders" and "All Souls". While I think that overall this two-parter is solid in terms of story and character development, I found Scully’s moments much more rewarding than the rest. The nuances in her scenes were great; clear, intriguing and smart.

As for the art and colors of this issue, Lorimer and Lafuente did a great job setting the mood. The style adopted to symbolize the visions, memories and the present reality were very dynamic and it served the story in more ways than one.

The covers by Francesco Francavilla (Regular) and menton3 (Retailers’ incentive) are both great to me, and it’s been a while since I didn’t just choose the one. Both are really different from each other, but both communicate well what this issue is about.

As always, we hope you’re supporting your local retailer by subscribing to this series. You can also get your hands on it via Comixology, and don’t forget to let them know what you think by writing to This email address is being protected from spambots. You need JavaScript enabled to view it. with the subject “OK to print”.