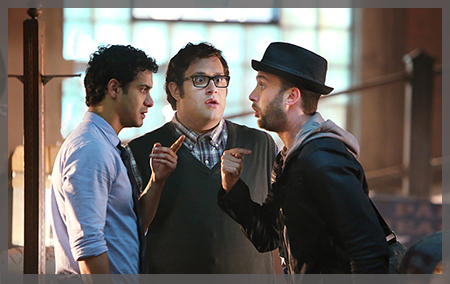 We're beginning November but for the Scorpion universe, it was more of a Father's Day time of year, of sorts. This week's episode is filled with many an emotional reveal and a healthy dose of action.

For our take on it, click on "read more".

Three inmates escape prison and the authorities are baffled as to how it happened. Team Scorpion must come to figure it out for them. One of the inmates, Percy Jones, is a genius â€œhacktivistâ€. He set up devices so they could escape, cloning the signal to open the gate and allowing them to exit.

After watching the surveillance video Scorpion captures from a Chinese satellite, Walter figures that the other two inmates who escaped had kidnapped Jones. They were able to dupe him because since geniuses are straightforward with their arguments they also expect others to be as well. 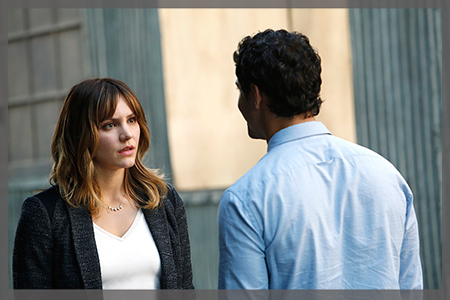 Jones is not giving up, he leaves breadcrumbs as his captors hijack a car, allowing them to follow along. They decide to rig the Amber Alerts system - an emergency child abduction wireless notification platform - to transmit a message to Percy.

They manage to track Percy to a cabin but get discovered thanks to Sylvesterâ€™s clumsiness while manning a drone. The inmates drive off with Percy to a new location. The footage that the team captures before they lost the drone allows them to track some of Percyâ€™s computer that heâ€™s using for a hack. With the previous information they used to track him down, they can log into his webcam and try to get a sense of their new whereabouts.

Doing so, they figure out they have no sound coming from the feed, so they recreate the sound waves that they can detect via the movement of a bag of potato chips they have on the video. Cabe even plays along with them to recreate the voices of the captors for accuracy. This way they know what theyâ€™re up to.

They find out that the reason heâ€™s being held against his will is to help them hack into the stock exchange, a plan that Jones had already set in motion for himself, but now the Russians were in it to get their hands on the money and then get rid of him. Walter then questions why save Percy, heâ€™s betrayed them, and at the same time they are encountered with the fact that they still have to stop the robbery from happening.

They communicate with him via the webcam, and Percy uses Morse code to tell them of his location. But Toby deciphers the message inaccurately, sending Gallo and the SWAT team to the wrong building, leaving Scorpion having to be ingenious to save the day.

They start a fire in the warehouse that smokes the Russians and Percy out of the building, where Toby and Happy fake a take down by the FBI. The Russians donâ€™t buy it and set out to shoot them. Walter sends Paige and Sylvester away before theyâ€™re discovered - he canâ€™t allow Paige to be dragged into this leaving Ralph by himself. The Russians shoot at them, they fight back, Walter knocks one of them down - just like Cabe had taught him to do - but everything seems lost anyways. Just in time, the SWAT team and Gallo come back and aid them as they are about to get shot and burned down by the kidnappers.

Cabe questions why Walter is so altered about Percyâ€™s treason. He confesses that he also felt betrayed by Gallo back in the day, and hasnâ€™t quite gotten over it. That moment in his life has driven him to interpret everything under a different lens. 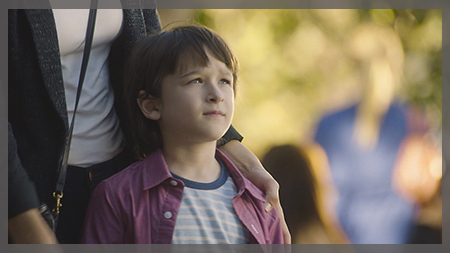 Letâ€™s be clear. If youâ€™ve been following this show and caught the name of the episode before watching, you knew you were in for a ride that would most likely leave you weepy. Come on, admit it, tough guyâ€¦ you know you turned away from your girlfriend or hid from your pals and dried those tears a couple of times while watching.

In any case, this week Team Scorpion tackles the question that perhaps some of us were too entertained to ask: Where is Ralphâ€™s dad?

It turns out that Drew, played by Brendan Hynes (Castle, Lie to Me) had been away for most of Ralphâ€™s life. Heâ€™s trying to reconnect with Ralph, but Paige wonâ€™t allow it and to make it worse, the team finds out about his past: he has Battery charges in his criminal file. They become super protective of the kid.

Paige gets upset at their invasion of her privacy and interfering in her decisions as a parent. Theyâ€™re not emotionally equipped to deal with a matter like this, but their argument is that they care too much about Ralph to let it go. Walter is deeply attached to the boy, mainly because the situation rehashes many painful moments of his time growing up and his relationship with Cabe.

During the episode, we get to enjoy a number of flashbacks that tell us the story of how Cabe and Walter got acquainted in the past. He was a father figure to him, where his actual father couldnâ€™t understand the potential and talent that he possessed. Cabe was the one to give him the fatherly lessons and understanding that he wasnâ€™t getting at home, a window to the world, a way to change it for the better or for the worse, as happened when Cabe accidentally betrayed him causing the separation that we learn about at the beginning of the whole show.

Because of the rocky road between Cabe and Walter, the latter is extra cautious about letting the story repeat itself with Ralph. He clearly doesnâ€™t want to disappoint him or hurt him, so his protective instincts flare against the presence of Ralphâ€™s father and the assumption that he represents a danger to the boy.

The truth is that Drew was wrongfully accused and even though he walked out on them, heâ€™s still being respectful of Paigeâ€™s motherly presence and not being confrontational about his desire to rekindle with his son.

Simultaneously, we learn a lot about Happyâ€™s own heartbreaking story with her own father. Toby digs up her social services file where she has information to track him down. It turns out that he abandoned her. Faced with Ralphâ€™s situation, she avoids the topic and throws out her file, not interested in finding out the identity of her father. But seeing how no one could make the right choice for Ralph, she intervenes urging Paige to make the correct one: to not let Ralph perpetuate the doubt that he was important to his father, to stop making him wait for him to come back.

From Sylvesterâ€™s story we learn that he was a disappointment to his father as well, because of his inability to excel at sports.

Cabe also reads through Walterâ€™s hesitance and position towards Drew, admitting where he dropped the ball as the father figure he became to Walter.

At the end of the day there are multiple breakthroughs in all of these situations:

â€œFatherâ€™s Dayâ€ was written by Nick Santora, and he did an amazing job creating a pace in this episode that wove the back stories without them feeling forced or even patronizing. It kept the tension high, only allowing brief moments of rest to get the audience back on the edge of their seats.

As you know by now, Iâ€™m a sucker for the relationship issues between Cabe and Walter and this week this aspect of the show was top notch. Weâ€™ve touched upon the betrayal, and their emotional struggle in previous episodes, but I wonder what other aspects did the fallout between them influence and affect Walter. We saw a brief moment where heâ€™s developing an experiment to investigate his sisterâ€™s condition with a mouse he aptly names Gallo; this in my book serves as a great foreshadowing momentâ€¦ Did he influence this relationship as well? Does Walter blame Cabe for any of his sisterâ€™s fortune?

I enjoyed Elyesâ€™ performance this week; I feel that in this episode he got to fill the spaces that were yet to be occupied - the passion and urge felt tremendous on him. Same can be said about Kat McPhee as she continues to embody this single mom in search of a better future. Her angst about the consequences of each action, of each interaction, the weight of that parenthood is evident, but fair. Even when on the brink of making the wrong decision, I like that Santora brought it back to the fact that she is always just, even when she needs an extra nudge.

Another thing to note, that I continue to enjoy, is Robert Patrickâ€™s understated comedic abilities. His interaction with Eddie Kaye Thomas was indeed the cherry on top of everything this week.

In relation to the ships, Toby and Happy are getting more daring, more so on his side, while she fights back; itâ€™s the sexy side, itâ€™s the lusty side of this narrative. Meanwhile, Paige and Walter delve deeper into the emotional overhaul that heâ€™s going through, the enormous adaptation that they must go through to be on the same page, eventually. Slow but steady it seems.

Scorpion continues to be a heavy hitter every week for CBS in the 9PM slot. Iâ€™m very pleased that many of my observations and questions get answered every week and so I very much look forward to my dose of geniuses every Monday.

For my impromptu live tweet while I watch the show, follow me at @AviQuijada on Twitter, and as always, the invitation stands for you to follow the production team at @ScorpionCBS for tons of behind the scenes details and interesting facts of the process of bringing this show to life.