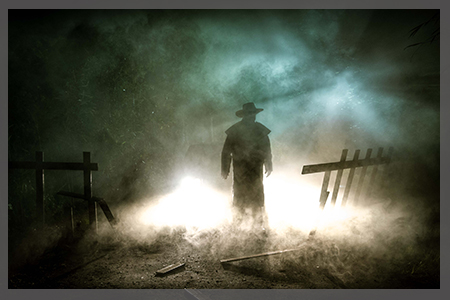 Back when I interviewed Abduct director Ilyas Kaduji, he was deep in the trenches of post production. In our conversation and listening also to William B. Davis talk about his great experience shooting this film, I found myself very excited about the possibilities that it allowed to this group of creators.

Kindly enough, and even when the movie hasn't released just yet, Mr. Kaduji presented me with the unique opportunity to read and review the script of the film.

I have to say, it is a rare situation that has been granted to me. Usually, you're given the finished product to review and give an opinion on the work that is out for everyone to see, but this has given me insight into the moving pegs that will eventually become Abduct.

I will give you a short synopsis, trying not to spoil too much, after the jump.

Crystal was raised by an odd set of parents that subjected her to ritualistic abuse. An event takes place, her parents die, and she blames herself for their demise. She's taken by social services until she's old enough to leave their care. She never overcomes that feeling of responsibility for what happened to them, but the question still hangs in the air... Did she really kill them?

When she turns eighteen and is freed to the world against her wishes, she tries to run away from society, thinking that she's a threat to everyone around her. She runs into Malvin Hart, a young man that gives her a ride after he finds her collapsed in the middle of the road from exhaustion. Things don't go well. She enters a trance, and hours later when she wakes up, he's dead, killed in what seems to be a satanic ritual. She runs away again, always haunted by the presence of looming dark figures that threaten her. She thinks that she's done this.

Crystal calls for help as she runs away from one of the mysterious figures after her. She dials into the radio show of skeptic extraordinaire Ridley Kay, where he's set to debunk government schemes, the unexplained, and then some. Crystal tries to warn him of what's going on, even going into a momentary trance. White Path, a Native American also listens into this call, and is suspicious of her immediately. He will become sort of the guiding light for this whole ride. Ridley is also looking for the truth about his own life; whether it be in the arms of the equally interesting Lyra, a Russian abductee, or in uncovering what's hidden out there.

As it happens, they do not believe Crystal, but that doesn't stop their encounter as she unknowingly ends up crashing into Ridley's RV when trying to escape.There she runs into Zane, a down to earth texan played by William B. Davis, and his wife Caroline.

They set out to help her, and in doing so, open the doors to more knowledge than they could ever imagine. Dangerous knowledge. They'll put their lives on the line for her, to give her a real second chance at life, while trying to understand what really goes on behind closed doors guarded by men in black.

The resolution, without giving too much away, comes when everyone challenges their own beliefs and learns how to think outside the box, in a multidimensional way, where reality is not the straightforward space where we reside. Resolution, also, doesn't necessarily mean that the threats are over.

Right away I can tell you that the script is not your usual spoonful of SciFi. It is filled with a ton of out of the box references and knowledge stemming from the extensive investigation that screenwriter Phil Daay and Kaduji went into to come up with this story. The first thing that called my attention is their intention to explain how every phenomena we've heard out there might be interconnected as different clues to the same mystery and not separated events. Whether he's successful or not at this, what strikes me is the inventive and full blown imagination to connect us and transport us to a mindset where everything is possible.

There are pretty daunting moments in this screenplay, especially with Crystal. It stabs at all the weak spots humans guard the most: proneness to paranoia, family, love and then some, but it does so without losing a healthy dose of action, and even moments of sarcastic comedy for the relief of everyone.

It's hard to speak of anything other than what you see on the page, since so much of what you will see on the screen will be the result of Kaduji's work, directing a very diverse and experienced group of actors, seasoned with what aims to be very interesting VFX work, which is one of the ambitious sides to this production. The dialogue is interesting and so is the pacing of the story. The ending, while I know I'm not being quite descriptive of what it will entail, is definitely out there.

When you go see this movie, do so with an open mind. At the moment of this review, the production team had just marked the movie as Delivered. So it won't be long until we get some news about the film's exhibition engagements.