Chuck returns and Jimmy tries to live a life on the straight and narrow. In this week’s Better Call Saul, “Cobbler”, Jimmy’s morals are put to the test when Mike calls with a pro bono job.

Hit the jump for our recap and review.

We open on Chuck as he sets up a metronome and methodically practices a piece on the piano. The scene is melancholy and I almost feel sorry for him… until I remember how he screwed over Jimmy. The direction in Better Call Saul is always stellar, and this week with Vince Gilligan taking the wheel, it’s no exception, it’s all sharp angles and low lighting, blurred silhouettes and ominous shadows. It’s gorgeous, highlighting Chuck’s frustration with his now Jimmy-free life. 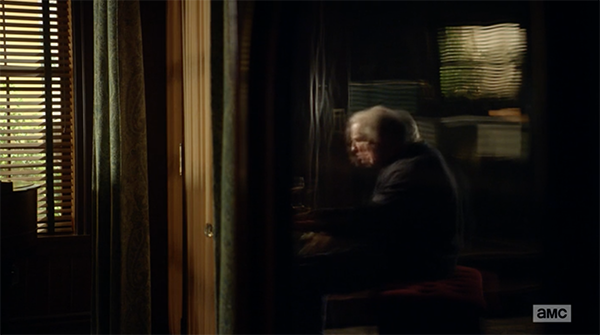 There’s a knock at the door. It’s Howard delivering case files and Chuck’s groceries. He’s come to check up on Chuck and Chuck hints he’s thinking about leaving the house and coming into the office. It’s not long before the subject of Jimmy comes up. Howard reveals to Chuck that Jimmy’s working for Davis and Main and Chuck stops short, in disbelief. As Howard continues, Chuck becomes more and more tense, his face contorted with every happy new detail of Jimmy’s life. Howard leaves and he returns to the piano, irritation etched into every pore of his face. I have to wonder if Howard was there to check up on Chuck as a friend, to rub Jimmy’s new life in Chuck’s face, or to incite a confrontation between the brothers. Despite his almost-redemption last season, Howard is still something of a wildcard.

We catch up with Kim at HHM as she’s changing the seating arrangements so she can sit next to Jimmy. Later, as the team goes over the Sandpiper case, Kim slides her heel over for a little game of footsie. Let’s all hold hands and say, “Aww!”

As is tradition, Kim and Jimmy meet up in the garage for a smoke and to discuss Jimmy’s new job. Jimmy gushes over how cushy and amazing his job is, but it seems forced. This isn’t the world Jimmy was built for even though he’s trying so very hard. The conversation moves on to the future, their future, and I swoon a little while simultaneously dying a little inside. One of the best aspects of Better Call Saul is that we already know the future. What could be a disadvantage is turned into a plus, as all the happy times are laced with a heaping dose of bittersweet. As Jimmy prepares to leave and go pick up his shiny new company car, Kim offers him a gift. It’s a coffee mug bearing the words: “Worlds 2nd Best Lawyer.” It’s adorable, as are they. He pops it in his cup holder; it’s a perfect fit. 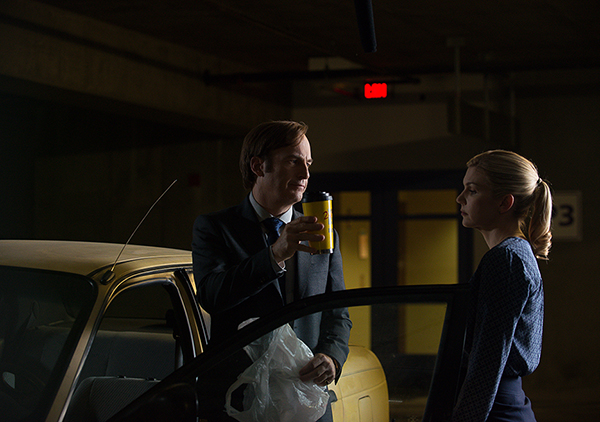 At the beauty salon, Jimmy trades in his beat up yellow ride for a shiny new Benz. The ladies from the salon look on in awe. It’s a moment of victory for Jimmy. As he prepares to drive off, he attempts to put Kim’s mug in the cup holder and it doesn’t fit. “Must be metric,” he muses, tossing it aside. That can’t be a good omen. Cut to an awesome shot through the medallion of the Mercedes Benz as Jimmy drives down the highway toward Santa Fe and his new life. 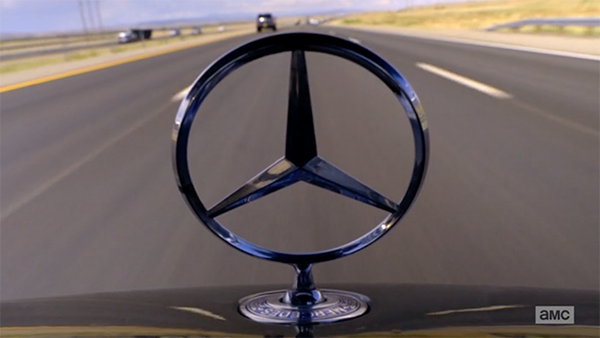 The Hummer-driving drug dealer rolls up to Mike’s parking booth. He’s there to see the police about his baseball card robbery. Clueless as ever, he’s still worried about his cards and the police want to help. Mike informs him that he’s an idiot, basically. The cops are on a fishing trip, there to sniff out the reasons for his “I am a drug dealer” truck. It takes a bit to convince Daniel to not visit the cops but eventually he admits defeat as Mike offers to find the baseball cards, for a price. I could watch Jonathan Banks play Mike all. day. long.

Jimmy sits at his desk, scribbling onto a yellow legal pad. Noticing something in his notes, he pays a visit to his boss, who casually plays an acoustic guitar in his office to  “let off steam.” Everything about this office is over the top and trying too hard, including his boss. But Jimmy has come up with something that might win them the case, and the boss offers Jimmy praise for his work. Jimmy doesn’t seem to know how to accept the compliment and for a second, it throws him off. 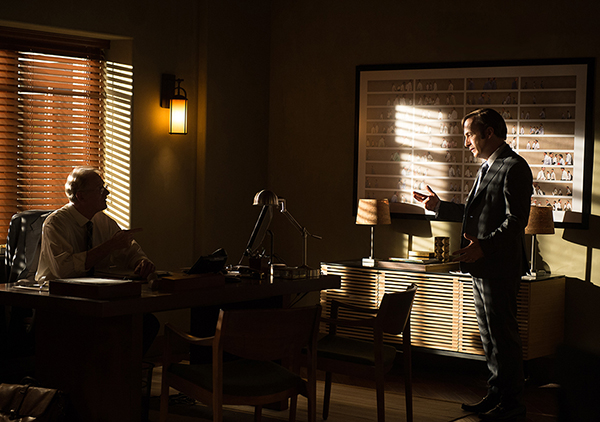 Meanwhile, at Nacho’s father’s auto shop, Mike is hot on the tail of Nacho and Daniel’s stolen baseball cards. The old man seems like a standup guy and father and Mike plays it cool until he leaves so he can talk to Nacho about the cards. Proving that Mike is also a standup guy, he’s not there to threaten Nacho’s family, he’s there to make a deal and warns that if Nacho doesn’t want to play ball, Tuco might be interested in his side business with Daniel. If Nacho gives back the baseball cards and 10k in cash, Nacho gets 60k… We cut to black before Nacho finds out how. 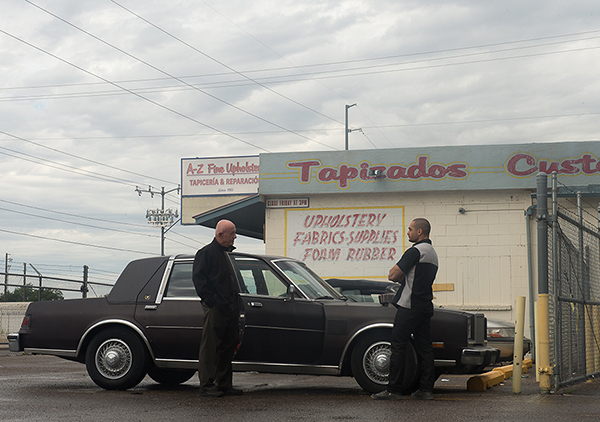 We land back with Chuck who is lying in bed before the day begins; he’s anxious and perhaps a little lonely. When his assistant arrives that morning, Chuck is dressed for success and ready to take on the world.

Daniel and Mike meet with Nacho to trade the Hummer for the cash and cards. Daniel gives a laundry list of care instructions for his beast of a ride and baby but Nacho informs him that it will be going to a chop shop. No good drug dealer would be caught dead in it. With the deal done, Daniel is off the hook with his baseball cards and Mike has a cool ten grand. Daniel’s phone rings. It’s the police again.

At a meeting at HHM, Jimmy is at his best, showcasing his talents as a lawyer, that is, until they staff is ordered to hand over all their electronics. Jimmy knows what’s up immediately. Chuck has arrived. I want to hurt that man. Jimmy is thrown, but with a hand to the thigh from Kim, he recovers and hits a home run.

After the meeting, Jimmy wants to know why Chuck’s there. “My name is on the building,” he says.

“To bear witness,” Chuck replies with a smirk. Screw that guy! There’s a flicker of remorse on Chuck’s face and I soften a little.

“Are you still morally flexible?” Mike asks.  Jimmy is.

At the police station, Jimmy meets with the detectives to represent Daniel. They want to know about the secret compartment in his baseboards. As Daniel is about to confess to all his sins and then some, Jimmy steps in, sending him outside.

The following scene is brilliant and everything that I love about this show.

Jimmy tells the police that Daniel makes videos and that he has an arrangement with a wealthy man; it’s heavily implied they are in a relationship. The police aren’t catching on. Really getting into the story he’s concocting now, Jimmy continues.  This wealthy man has a proclivity for the strange. He goes on to tell them he gets off by watching men sit on pies. Fruit pies. It helps if the sitter is also a crier. Eating the pie is also an option. Odenkirk’s delivery is brilliant, earnest and hilarious. Word will never do this scene justice, just trust me and watch it.

It’s easy to see why Jimmy is having such a hard time following the straight and narrow when he’s having so much fun conning the cops. He’s just too good at it. I’m dying laughing. Eventually, the cops are convinced. But they’d like to see the video.

Ladies and gentlemen, Saul Goodman, has left the building.

Later that night, Jimmy sits in bed with Kim, feasting on a spread of pies. He confesses to his story to Kim, and that he went so far as to actually make the video for the cops.  All warmth and levity seeps out of the room when the making of the video is revealed. She is horrified, chastising him for falsifying evidence and endangering his new career as a legit lawyer.  He reminds her of their fun screwing over the stockbroker but she reminds him that that wasn’t work. I love this woman, she has a very valid point and reason to be afraid. 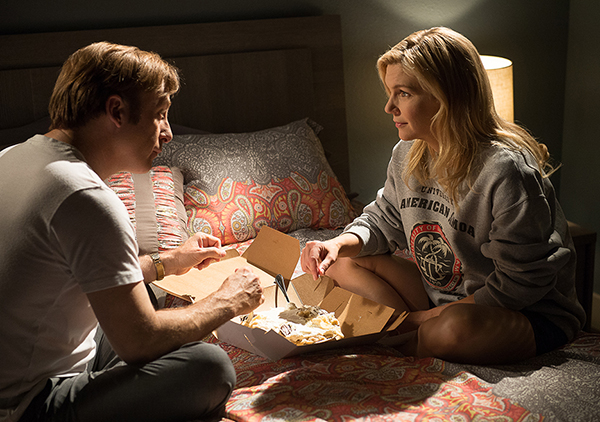 We pull back as they share their now solemn picnic on the bed. The episode fades to black. My heart hurts a little.

This week, Jimmy got to have his pie and eat it too. But we all know that can’t be sustained and I wait on the edge of my seat as we witness the slow downfall of Jimmy McGill and the triumphant birth of Saul Goodman, only to be a pained bystander to the tragic fall to Cinnabon manager, Gene.