The X-Files NYCC Press Room: What to Expect from Season 11 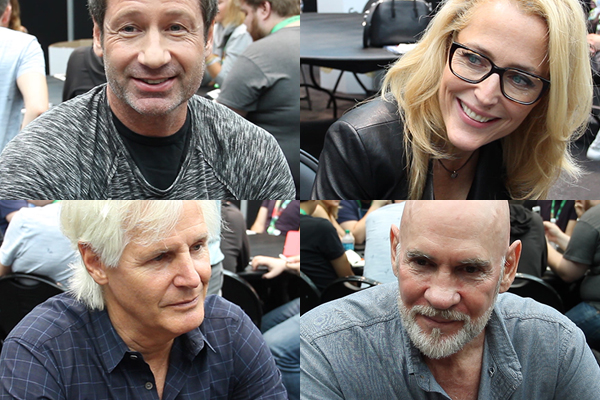 With a show as secretive as The X-Files, trying to get many details about what to expect in the new season is like trying to get CGB Spender to give up his cigarettes. You can try but it probably won’t work! X-Files News participated in the press room event at New York Comic Con and spoke with Gillian Anderson, David Duchovny, Mitch Pileggi, and Chris Carter about Season 11. You can check out the videos of the full-length interviews too but here are some of the highlights.

The new season gets off to a quick start with a mythology episode that tackles the cliffhanger from “My Struggle 2.” Creator, Chris Carter, said he had a plan in mind even before Season 11 was a sure thing and hinted a rewatch of that episode would provide an answer. “You’ll see if you went back to look at the cliffhanger, you’ll see exactly where I set up what happens in episode one of Season 11.” Gillian Anderson joked that her reaction on reading the first script was, “what the f*ck?” while Mitch Pileggi called the episode a “head spinner.”

Fans of William will be happy to hear we can expect more of him this season. Carter said the story of Mulder and Scully’s son is handled in an “interesting” way. The actor playing William has been cast and Anderson shared that it was nice to finally put a face to the child they’ve been talking about for so long.

But what about the relationship that created that child? Carter had this to say, “We’ve always played that as real and honest, about where their characters would be in our minds from year to year to year and I think you're going to find that it makes, I think, plausible sense where we find their characters in Season 11.” He also said that the relationship is handled in a new and interesting way. Some fans have been vocal about wanting more of the “ship” but David Duchovny believes Mulder and Scully’s working partnership is more interesting. He joked, “they may want a sex scene, but I guarantee you they don’t really. Especially not at the age we are at now.”

It’s no secret the U.S. is experiencing trying times politically and that reality will be dealt with in the new season. As Carter explained, “It's a really curious time to be doing The X-Files. The show is a science-fiction show but, really, it's a science show. Scully's science is the center and core of the show and Mulder's belief, which you could call the conspiracy aspect of the show, was always out there and he wants to believe. Now, it's the opposite. People have thrown science out the window and they believe in conspiracy theories, so we're dealing with this situation that's almost completely reversed and it's an interesting time to be doing the show.” Mitch Pileggi agreed that the time is right for more X-Files. “Because it’s all conspiracy theories and lies. Nobody’s telling the truth. The truth ain’t out there man. Everybody’s lying about everything. And what do we believe?” he said. David Duchovny thought Mulder might even be “a little bit of a guy that says fake news, too. Which is unsettling to me.” Gillian Anderson said, “All bets are off at the minute. So, on the one hand, that's exciting, but on the other hand, it's tedious.”

We’re also in an era where fans have more opportunities to share feedback with actors and crew than ever before. Back in the day, we stuck to message boards and chat rooms that show staff could seek out, but now actors like Duchovny, Pileggi, and Anderson are just a tweet away. Does all that social media interaction affect how they approach their characters? Duchovny and Pileggi both said no. Pileggi offered that he does enjoy interacting with fans that way, but that feedback doesn’t affect how he plays a long-term character like Skinner who he said is “just part of me.” For Duchovny, he said that’s the last thing an actor should be thinking about. “As an actor, you’re constantly guarding against any kind of self-consciousness, that’s the death of acting. That's somebody watching themselves and if you start to think about people watching you then that’s the back door into you’re own self-consciousness. I’ll have to forget this conversation by the time I get back on set.”

Not many characters have had as long a screen life as Scully, Mulder, and Skinner. Ten seasons, two films, and twenty-four years have passed since the first episode premiered. But even after all this time, Anderson said she still finds interesting things about playing Scully. She said there’s a challenge in finding “what elements of her personality are appropriate in a mature woman,” and that it’s an interesting question to answer. Duchovny said there’s still a fearlessness to Mulder that he appreciates. He said, “The fact that he can still believe what he believes even though he’s never ever gotten the truth. That’s kind of phenomenal when you think about it. Or sad.” For Pileggi, he appreciates Skinner’s “strong moral compass” and is excited for fans to learn more about the assistant director’s past in an upcoming episode. He said that even after all this time, Skinner is still Mulder and Scully’s “champion” at the FBI.

We talked about so much more with Carter, Anderson, Duchovny, and Pileggi. Check out all four full interviews for more topics like Anderson’s thoughts on adding more women to the X-Files crew and one of her favorite parts of playing Scully, Duchovny’s advice for Season 1 Mulder, Pileggi’s interaction with William B. Davis as the CSM, and Carter’s feelings about what makes a “crowd-pleasing” episode.