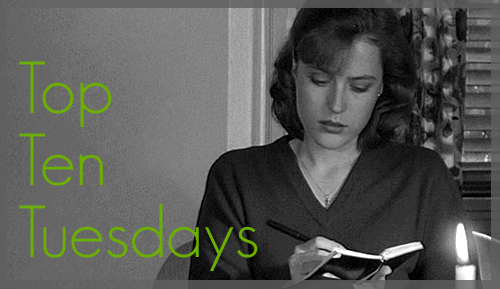 Whether you like your popcorn buttered or unbuttered, your yoghurt mixed with bee pollen, or choose your pizza topping based on your latest autopsy findings, we have something for you in this week's Top Ten Tuesday as we take a look at some of the greatest food-related moments on The X-Files. Dig in after the jump! 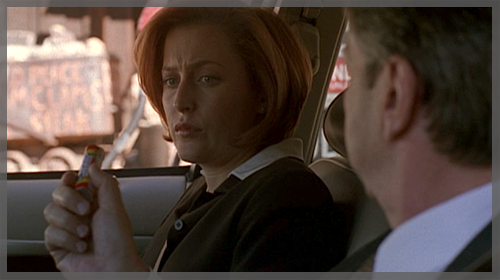 10. "En Ami" - Lifesavers
We’re starting our list this week with an item that can only be classed a “food moment” in the loosest possible terms, however it makes it into my top ten because of the sheer volume of meaning attached to a three second long moment. During a stop on their awkward road trip, the Smoking Man offers Scully a Lifesaver. In doing so we comprehend not only the double meaning in his words - his whole scheme to get Scully to go with him revolved around her good nature, her desire to save lives even if it means being forced into an alliance with the devil - but also a look at the depths of Scully’s discomfort. She is unwilling to accept so much as a candy from him at this point and her expressions shows us distrust and a little disgust as well.

"Lifesaver? May as well get comfortable. We've got a good drive ahead." 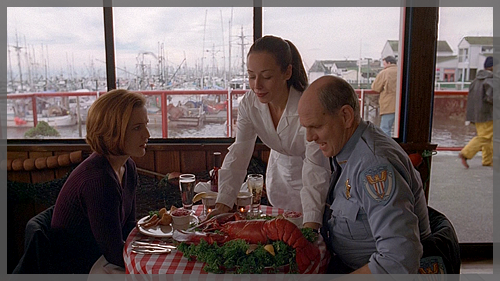 9. "Chinga" - Lobster
I maintain that if Scully were not already dedicated fully to Mulder by this point in the show, that something could easily have happened between her and Captain Jack Bonsaint. The two of them clearly like one another from the outset and they talk together comfortably - even when Scully is taking on Mulder’s usual role and suggesting ideas that require quite a leap of faith for any law enforcement official. Scully even mentions sending him a gift at the end of the episode, referring to him as “some guy… Jack” rather than his official title. It is their meal at the harbourside restaurant that seals it for me though. Regardless of how the cheque was split, this is clearly Jack taking Scully to eat and making menu suggestions, plus a lobster that size is never going to come cheap. Do you think he takes all visiting federal employees out for lobster? No, neither do I.

"Oh, my god! That looks like something out of Jules Verne. We’re supposed to eat that?" 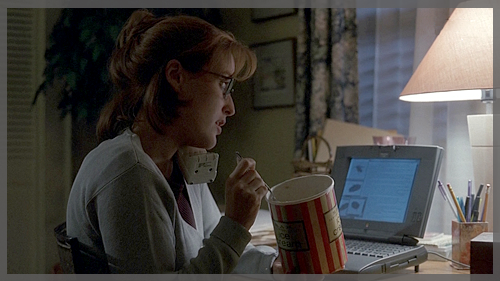 8. "War of the Coprophages" - Ice Cream
"War of the Coprophages" is one of very few insights we ever had into Scully’s “normal” everyday life. Throughout the course of the episode we see her at various activities during her evening at home - bathing her dog, reading a book etc - even as we watch those activities gradually fall by the wayside as she is swept up into Mulder’s ad hoc investigation. Getting to see her eating ice cream straight from the tub while sat at her computer allowed us to connect with her and showed us Scully’s feminine side without altering her character.

"Mulder? I've been doing some research. Back in the mid-'80s, there was a cockroach species previously only found in Asia. And since then, it's made an appearance in Florida. They've now completely established themselves in this country." 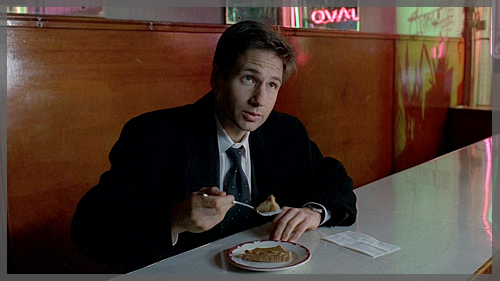 7. "Jose Chung’s 'From Outer Space'" - Sweet Potato Pie
Whether or not Mulder really did eat an entire sweet potato pie by himself while questioning a diner’s cook is one of dozens of questions we’re left with at the end of “Jose Chung’s ‘From Outer Space’” but regardless of its factual accuracy it’s hilarious to watch. The scene was shot at the Ovaltine Cafe in Vancouver, which incidentally is high on my bucket list of places to visit one day. The cafe just celebrated its grand reopening with a new menu and extended evening hours. If you’re in Vancouver this summer, perhaps to watch some TV show I heard is filming nearby, then check it out.

"Sat down, ordered sweet potato pie, identified himself as F.B.I. Agent Mulder. He then questioned my friend. He then ordered piece after piece, each time asking another question." 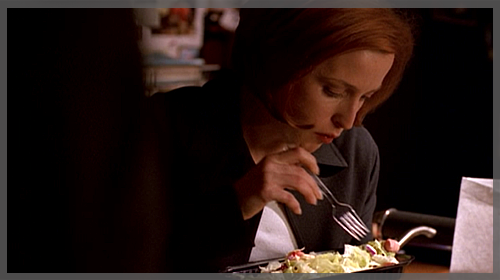 6. "All Things" - Salad
Scully’s food habits seem to veer wildly between the horrendously unhealthy (giant buckets of chicken, ribs, and tubs of ice cream) to the highly health conscious (salads, and yoghurt with bee pollen) which makes her highly relatable to most women I know. At this point in the show she was back on a health kick, possibly because this was around the time she was undergoing IVF? Of course none of that is really important. What makes this scene is Scully’s intent and hilarious focus on dressing her salad to the exclusion of Mulder and his fascinating slideshow about crop circles.

"Then, in 1997, even more complex formations occurred… and I'm not wearing any pants right now." 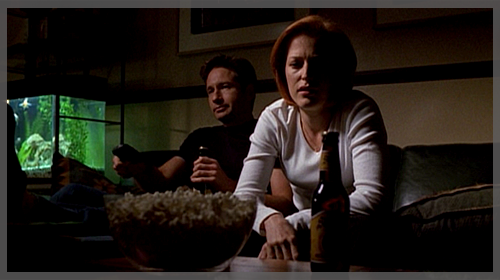 5. "Je Souhaite" - Popcorn & Beer
The few times we got to see Mulder and Scully happily spending time together without it being ruined by shady forces were so few and far between that we Philes tend to cling onto them like precious jewels. “Je Souhaite” may not be counted amongst the greatest episodes of all time but its closing scene with Mulder & Scully chilling out together with beers, popcorn and a movie is one of the show’s finest moments - even if it does mark the last moments of being “fairly happy” the pair will have together before the rollercoaster of Requiem onwards. Oh, and for what it’s worth, butter on popcorn is bizarre and gross. Urgh, Americans....

"I can't believe you don't want butter on your popcorn. Uggh. It's un- American." 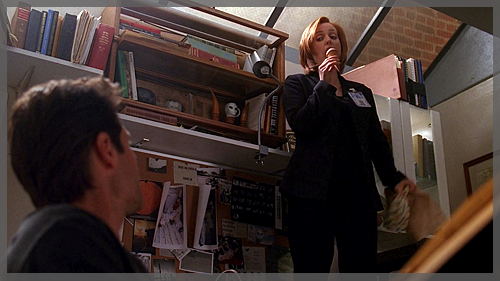 4. "The Unnatural" - Non-Fat Tofutti Rice Dreamiscle
I’m not sure I’ll ever be able to watch “The Unnatural” without rewinding the “war of the proverbs” scene at least one time. There always seems to be something new to spot, in fact even when capping the scene for this post last night I found myself amused by Scully’s sly look to check whether or not Mulder has noticed her theatrical packet opening yet. Sadly the non-fat tofutti rice dreamsicle seems to exist only in the X-Files universe, but it does exist as an eye-shadow over at Tilt/Shift cosmetics. Other shades include “Boyish Agility” and “Cerulean Blue” and I'm tempted to try them all.

"It's not ice cream. It's a non-fat tofutti rice dreamsicle."
"Ugh. Bet the air in my mouth tastes better than that." 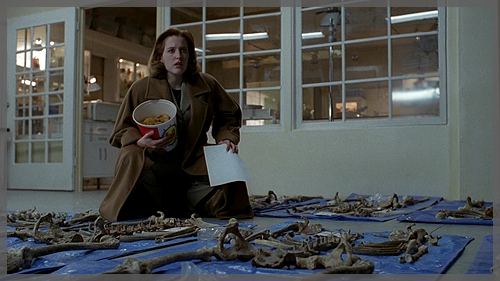 3. "Our Town" - Bucket of Chicken
There are many personality quirks that I consider to be very “Scully” in nature - skeptical, rationalism, a love of bubble baths - but perhaps the most obviously Scully trait someone can have is a strong stomach. Her ability to perform an autopsy and become hungry in the process because of the stomach contents she discovered is practically mythical. One of the most obvious examples of this was in “Our Town” when she arrives at the makeshift forensic site filled with human bones carrying an entire bucket of Chaco Chicken. I have to add that any woman who buys an entire bucket of fried chicken apparently just for herself is a woman after my own heart.

"Scully, I think the good people of Dudley have been eating more than just chicken." 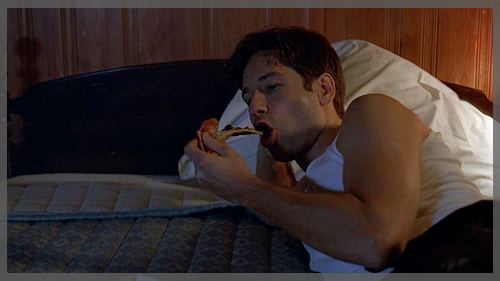 2. "Bad Blood" - Pizza
Dana Scully isn't a woman who just thinks about eating a pizza based on a dead man’s stomach contents, no this is a woman who goes out and orders herself one with the exact same toppings when she's finished. Of course as we all know Scully's track record for actually getting to eat the pizzas she orders is pretty woeful (see also: “Empedocles”) but at least she tries. 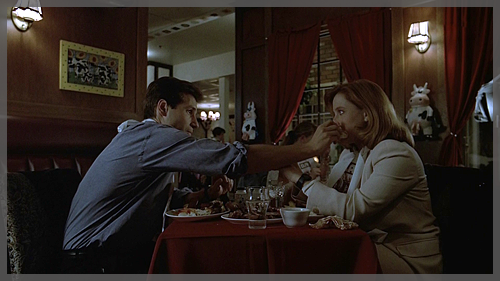 1. "Red Museum" - BBQ Ribs
There was only one real choice for the number one slot this week (although "Bad Blood" came close) the most adorable good scene in the show's history. Although we never actually saw Mulder or Scully eating their delicious ribs, the sauce wiping incident instantly became one of the earliest and most-beloved shipper moments. In a rare moment of calm, our favourite agents actually got to finish their meal before trouble started up again as well. Clearly miracles were at work over in Delta Glen, Wisconsin.

"You know, Mulder... ribs like these, I'd say the Church of the Red Museum has its work cut out for it." 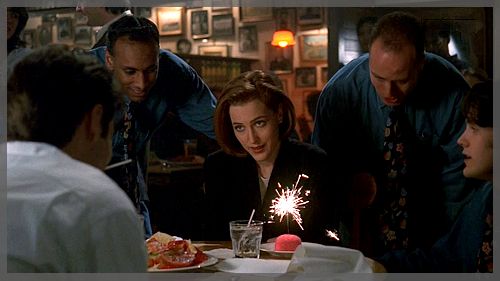 There were so many great moments that had to be left off this list that a bonus was almost a necessity. Honourable mentions go to Mulder's liver and onions comment in “Squeeze”, Scully’s’ "tank of gas" pizza in “Empedocles”, and Clyde Bruckman's banana creme pie obsession. However the bonus position has to go to “Tempus Fugit” and Scully's pink and fluffy birthday treat. I had no idea what it was until the other day when XFN writer Keva explained that it looked like a Hostess Sno Ball; another example of my British heritage denying me the necessary insight to understand the reference. Whatever it was supposed to be, Scully’s expression of amusement combined with the horror of being sung to in public (as anyone who’s ever had a birthday at TGI Fridays knows all too well) makes this scene one we just couldn’t leave out.

"Mulder... you have never remembered my birthday in the four years I've known you."
"That's the way I like to celebrate them...It's every four years, it's like dog years that way."