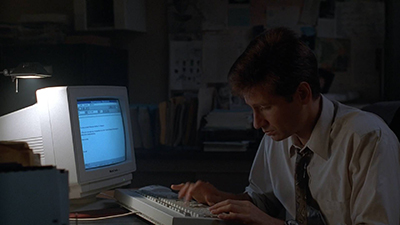 This week's author was introduced to The X-Files with a little "unrest" and her writing style and sense of humor will leave you with unrest when you realize you've reached the end of her written library. Meet Defnotmeyo. Whether you're looking for a laugh, something dark and full of angst, or something a little more "adult," she's got you covered.

If, like me, you're dying for any interpretation of the images we've seen so far from Season 11, "Home on the Range" and "My Son" are exactly what you need. Both capture Mulder's spark in a way I didn't realize I'd been missing, and now need more of.

And one of my personal favorites is "Red Flag Warning." Set just before "Arcadia" in Season 6, it beautifully captures Scully's scorched-earth feelings post-Diana fall out from "Two Fathers/One Son."

We talked with Defnotmeyo about writing, inspiration, and of course, The X-Files.

Apparently since October 27th, 1996. That was, according to Google, the original air date for "Unruhe." I remember watching thinking, huh, this is creepy. Then, who's that chick, she's awesome? Then ooooooooohhhhhhhhhhh my god who is that GUY? I was like... 13.

Oh no! I already accidentally answered that! My first episode was "Unruhe." It's a shame to break in on a Vince Gilligan episode, but I was hooked. It's weird because I was actually highly invested in the cancer arc, and considering I didn't know these characters that well, I think that's a testament to the writing of a lot of S4. There were some stinkers (looking at you, El Chupacabra) but there was a lot of greatness there.

Too long. I started writing fic probably when I was about 14. And it was... bad... It's still there, on Gossamer, and I will never tell anyone what my pen name was. On a kind of funny side note, I saw one of the very early fics I wrote get "recced" on Haven as a topic-fic. Oh gaaaaaaaawd I wanted to die.

When I was a kid I read a lot. And I wanted to write, too. I'd written some stuff prior to TXF fanfic, mostly poetry. But I was also a dark mother fucker... (sorry, can we cuss on this? if not, my bad)... so I had this idea for a serial killer novel stuck in my head that I wrote like, five different chapter ones to. Luckily, this was before people started going crazy, because my mom, my teachers, and my friends read this stuff. Today I'd be in jail. Back then I was talented. Either way, I ended up loosely incorporating a few of those ideas into fanfic and became hooked on feedback. Which is ridiculous. Because nothing I wrote at 14 was worth any good feedback. lol

Mulder Mulder Mulder Mulder Mulder. I heavily identify with the whole "asshole with a heart of gold" characterization. I just literally love that character so much. I think David Duchovny said it best when he was worried about how to play Mulder because it's easy for him to look like a buffoon. Because on the surface, Mulder really kind of is. He's a dork. But he's also very, very, very dark and kind of full of rage, and I don't think that gets acknowledged enough really. When I write Mulder, sometimes, he is a full-on dork. But a lot of my Mulder is extremely dark.

Honestly, writing Scully is hard as shit (sorry, cussing!) for me, and that pisses me off. The character inspired me to be where I'm at today (in a law enforcement type of career), and as a 5'1'' female, I feel like I should relate to her more, but I just don't. I'm much more of a flash in the pan type of passion that kind of exemplifies Mulder. Scully's that quiet creek, that place you go to for peace, but when it's pissed at you it floods your banks and ruins your house for the rest of your life. I don't have that kind of commitment.

"En Canine Care-itas" is always going to be my favorite unloved child. I giggled the entire time I was writing the intro, which is dark as all hell in reality. And I just have a very real affinity for "immortal" Scully, and Mulder somehow finding a way to chase her through time, always on her heels. A close second for me is "In-N-Out." In a way, that's one of the darkest things I've written.

I'm on AO3 under Defnotmeyo (btw... that's DEFinitely NOT ME... YO... My name has nothing to do with mayonnaise). My most recent master post is here, but I need to update it a little bit. Also, if you want to see me and Chelsea (@wtfmulder) talk shit about pictures of David Duchovny, check out anything on my or her blog with the hashtag: #florsea

Absolutely. However, I'm pretty slow at answering. I write fic like a flash in the pan. If it's in my head I'll drop 7k words in a night, but if not, I just stare at my cursor.

Back in the day, my serial killer in my drama novel was named Spencer Bishop and he looked, in my mind, a lot like Jensen Ackles. lol I tried to write that story for about a year so I'd like to revisit it one day. I've actually got a novel-length fic hanging out in my head, but the antagonist wouldn't have that name... but he'd be based on the same guy so I guess that is relevant.

Weed, Whiskey, and Warren Zevon. No, seriously, minus the weed because like, piss testing on the regular. My old supervisor used to tell me to write drunk and edit sober, and for me this holds true. Now... don't go become a substance abuser to get better at writing fic. There are other ways! But honestly, I really I.D. pretty closely to Mulder so usually when I get moderately inspired, I drink a beer and channel that idiot into helping me write fic. I wish I could share something more relevant. Storyboard. That's actually a good one. I haven't written a lot of longer fic, and the reason I've found is that I don't uh... outline or plot or storyboard. Haha whoops... But there are, like I said, a couple of ideas hanging in the back of my head for longer stuff and I know I'll absolutely need to storyboard for it. Also, one last one, and jeeze, I got long winded on this huh? Sorry! But the last one is to be okay with letting the plot of something longer breathe a bit. A lot of us are in the habit of these 1-4k word masterpieces, and now we feel like every scene/chapter needs a shitload of action and/or smut. It doesn't. Syntax6 was so damn good at this. Sometimes, you gotta just sit back and let the plot develop.

My favorite fic authors are: Penumbra, Pru, Syntax6, Aloysia Virgata, Lepus-arcticus, and WTFMulder. Oh. And all_these_ghosts (uh, their "if I am hopeful" post Rain King will kill you.) And Scullywolf with the scenes-in-between. Best Field Trip outside of Contact High. But honestly, there are so many freaking amazing writers right now on Tumblr it's hard to say. As for real life, I'm a Stephen King fan (his Mr. Mercedes novels can kill me tbh), and my favorite author ever is Jack London. "The Call of the Wild" is, by far, my favorite novel, closely followed by "Art of Racing in the Rain" by Garth Stein.

Just write. Anything really. A journal, a fic, a blog. I've only been back in the fandom about a year, and I've noticed a marked improvement in my writing. I'm not trying to slob my own knob here. But I actually re-entered the fandom to write because I want to start my own like... for profit... blog someday soon and I was like, damn, I need to practice! And I knew I needed to just write more and that's how I ended up back here. Now the for profit blog is on the backburner because I have to finish Good Boy!

Fandom is fun. It really is. And when it's not, that's when you gotta take a step back. And also. Laugh at yourself. That's my self-help blurb for the day. I've been asked a few times how to be a little more confident and feel a little bit better about yourself. The answer? For me? Work out, laugh at yourself, and enjoy a good god damn beer. Thanks again! And I'm like, ridiculously honored to have been asked to do this!

Thanks to Defnotmeyo for talking with us!