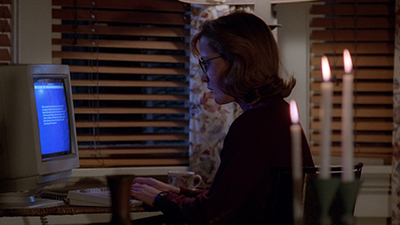 This week's author is a long time Phile and long time author who stepped out of the fanfic world for a while, and we're sure happy she's stepped back in. Meet mldrgrl! With 86 works on A03 alone, mldrgrl's range covers everything from fluffy short works to in-depth pieces that will leave you asking to get off the feels bus, and if you love Stella Gibson as much as I do, be sure to check out mldrgrl's work from "The Fall" too.

I know, for some, the letters WIP make them run screaming in the other direction but I promise this one is worth diving into before completion. "Not Again" is an AU starting at the end of Season 7. What if Scully went to Bellefleur with Mulder and was abducted instead? Mulder's tension and fear leaps off the page and there's a point in Chapter 1 where I felt the wind knocked out of me right along with him. If you're an angst junkie like me, it's a great ride. We're at 13 chapters as of this writing, so head over and catch up.

If you like your fluff with a little hint of angst to cut the sweet, "Take a Memo" hits the spot. Set around the "I Want to Believe" era, it looks at one way Mulder and Scully try to keep talking. If casefiles are more your thing, "The Witness" explores the murder of a young abductee and the only witness to the crime. It's told in the style of a TV episode and touches on some pretty dark subject matter but is a great read.

We talked with mldrgrl about writing, inspiration, and of course, The X-Files.

Circa 1995/1996. I started to watch sporadically in Season 3 and was completely hooked by Season 4 in the "don't talk to me, The X-Files is on right now" kind of way.

"Space." Which is why I didn't watch it again until Season 3. Though, upon many re-watches of the entire series, it's not the worst episode. Just not the most interesting to a 13-year-old.

Twenty years, I think. Thank you for THAT reminder.

After finding the newsgroup alt.tv.x-files.creative and realizing that people were also interested in reading stories about Mulder and Scully just going about their day and not necessarily solving cases (which is something I did not think myself capable of) I wanted to give it a try as well. It was seriously the best thing ever to get the weekly emails full of fic that filled in the holes of things we weren't getting on screen.

Mulder! For me, he's got the most texture. He's the most expressive so whatever situation I'm writing, it's usually Mulder's voice that's driving it forward. Plus, his character is really versatile. You can give him one-liners or monologues, use his arrogance or empathy depending on the story, explore his hyper-focus or his playful side. I don't care what mood he's in, I like being with him.

I don't like Cigarette Smoking Man. Not even a little bit and not even in a "love to hate that character" kind of way. I think it's mostly that I can not buy into the power he's given and his motives are so convoluted and slippery. I only see him as a device and not a character, so I think I've only alluded to his presence in a few stories and I was forced to give him a scene once, but only out of necessity.

Yes, I'm most proud of "Quantum Leap" because I never thought I could write something larger than a short story, let alone something that included sci-fi elements. I did a ton of research, trying to teach myself aspects of physics that I could use to make the story plausible enough in the X-Files universe (and in my head), and the whole piece was written solely because I had one scene in my mind, but I couldn't just write that scene without giving it a full story to fit into. It took me almost one year I think, stepping away from it for some time, coming back to it, doubting that it should even be worked on, but finishing it gave me a sense of accomplishment.

mldrgrl on tumblr and on Archive of Our Own. You can leave me comments on either place, but if that doesn't work for you for some reason, my email is This email address is being protected from spambots. You need JavaScript enabled to view it..

I do! Sometimes I post prompt lists to solicit prompts, but my inbox is always open.

Only for school assignments.

Most of what I write starts from a scene or a piece of dialogue that won't let go of me, like an earworm. Then I have to write it down or it won't leave me alone. Those stories always seem to flow the easiest.

Favorite author is John Steinbeck. Favorite fanfic authors include: aka 'Jake', prufrock's love, syntax6, and dashakay. I tend not to read WiPs, but I was pretty enthralled by the immersive fanfic of bohoartist and piecesofscully, "Two Agents Missing, Presumed Dead" on Tumblr. That's definitely something I would like to see more of.

Apart from the standard 'read as much as you can' and 'write as often as you can' I would add, say your dialogue out loud. Ask yourself, is this how people speak? Is this how the characters speak? Would they say this, and should it be spoken out loud? I love really good conversations in fic, ones that are rife with subtext, but it's easy to be taken out of a story if you know it's not coming from a character.

I'll share a personal anecdote. When I was 18, a friend of mine wanted to go to Venice Beach to see a palm reader and she made me go with her. I'm not much of a believer in psychic ability, tarot cards, palm reading, etc., but it was something like $10, so I got my palm read as well for moral support. The first thing the palm reader told me was that I was going to be a successful writer, which I found laughable because I wasn't interested in being a writer. It should be noted she told me other things that didn't even remotely come true, but the writing comment did stick with me because the interesting thing about that was that I had just signed up for a creative writing class for fun and it's a class I then ended up taking for the next four years.

I'd stopped writing fanfic after high school, didn't even read much of it after The X-Files went off the air, but I returned to it a few years ago just for fun and because I had a handful of friends who had just discovered the show and fanfic and I enjoyed getting back into it. Even though I was only writing for three people, it was fun. Another friend of mine had to really twist my arm to get me to join Tumblr and to dip my toe back in the world of fandom. It was kind of crazy to think that almost twenty years later, there's still a place where people gather to share their love for a show and its characters and crave stories and art just as rabidly as they did when the show was actually on TV.

I'm not the most vocal or social of people. I'm someone who's more content to sit back and observe rather than join it, but fanfic is at least one way that allows me to participate in the discussion. It often makes me think of that palm reader and how even though everything she may have said was utterly wrong, just the notion that there are people that want to read something I've written does, at times, make me feel like a successful writer.

And allow me to say thank you to those that have read, reblogged, commented, liked, or sent me messages about my work.

Thank you so much to mldrgrl for talking with us!