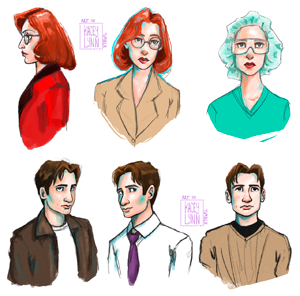 It's FanArt Wednesday again! This week’s chosen artist is Kacey Lynn from New Jersey. You can connect with Kacey on DeviantArt, Tumblr, and Instagram. You can also shop for her prints and check out her portfolio on her website.

Here's a little about Kacey:

1. When did you become an X-Phile?

I grew up hearing the names Mulder and Scully, I can't really remember a time when I wasn't aware there was this show called The X-Files. But it wasn't until this year that I finally started watching the series from the beginning. So I guess I'm sort of a junior X-Phile, haha.

2. What is the first episode you watched?

My first episode was Humbug. I was researching an art project that had to do with the circus and my sister (who's been a fan for a while) sat me down and made me watch it. The Mulder moment at the end will always be one of my favorites.

3. What was your favorite part of the revival?

I'm only halfway through the series, but I watched the premiere of the revival with mah sis (like I said, she's been a fan for a while and was pretty psyched about it returning). After that, I knew I had to go back and watch everything.

4. What inspired you to create X-Files fanart?

I draw what I love. And I really love Gillian's and David's faces. There’s so much about the show that inspires me...I could write essays. But I won't. I'll just draw pictures.

5. Who is your favorite character?

Ooo, tough question...yeah no, it's DANA SCULLY. Let me repeat that, DANA SCULLY. Again, I could write essays about how important her character is. She's everything I want to be.

So far "Ghost in the Machine" was really good. I like anything with the whole sentient computer thing. "War of Coprophages", this episode was a BIG DEAL. It was so meta and they totally took the mickey out of their own show. Brilliant. "Memento Mori" because Scully and Mulder and Mulder and Scully and emotions and I feel very emotional. "Redux II" --actually the whole set of episodes from "Gethsemane" to this one are so excellent. I love M/S fighting for each other, and all the moments between them when Scully is dying. Just A+ episodes.

8. How has The X-Files impacted your life?

As an artist, I feel like I never really saw or understood color, lighting, and composition before I watched this show. I've studied these things of course, but for some reason, The X-Files has helped me see all these aspects in a new way. Each shot was so meticulously planned, I believe the show is helping me grow artistically and I'm very thankful for that.

The characters of Mulder and Scully, their existential musings, their passion, their searching, their imperfect relationship...the realism of these characters is a hard thing to find in TV/film. It's one of those shows where you didn't even realize something was missing from your life until you watch it. Shows like this stay with you, they become a part of you. It's a place I know I'll come back to often, and if you want to be my friend you're going to have to watch it.

Thanks, Kacey! FanArt will be back in two weeks. See you next Wednesday with a new FanWorks!