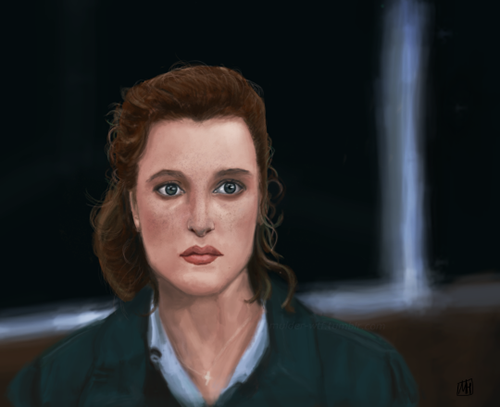 It’s FanArt Wednesday again! This week’s artist is Maria Lis from Belarus. You can connect with Maria on Tumblr. You can view her artwork here.

Keep reading below for more about Maria.

When did you become an X-Phile?

Summer of 2014. One tv channel had an X-Files rewatch marathon. I saw an ad and thought that it looked interesting. I hadn’t watched it before because I was sure it was the kind of show that would give you nightmares. Also I thought that Scully was her first name and she and Mulder were dating. Well, at least I didn’t think that they were married (as my sister did).

What is the first episode you watched?

What is your favorite part of the revival?

I really love that I can experience a new season with other fans and actually watch it as it airs. I was too young to watch it in the original run and when I started watching, I would have never guessed that there would be a new season.

What inspired you to create X-Files fanart?

X-Files fanart! Soon after I started watching the show I started looking for fanart. I really liked fanart by tumbler users muffinpins and mulderswaterbed. But you know, digital art looks so complicated to do so I just admired from afar. Then one day I saw a charcoal portrait by Fabrizia and I thought “Damn I want to learn how to draw”. So I’m trying. (Also Gillian’s face is such an inspiration)

Who is your favorite character?

Scully all the way!

I only get five?

3. “How the Ghost Stole Christmas”

“Mulder, the Internet is not good for you.”

How has The X-Files impacted your life?

I’ve made some really good friends in the fandom. I’ve also started drawing. The X-Files is a comfort now. Everything is good when I watch an episode of The X-Files.

Thanks, Maria! Stay tuned for a new FanWorks writer next week.