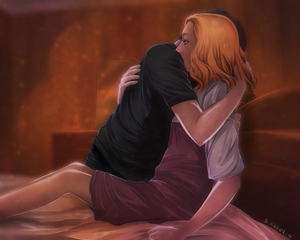 It's FanArt Wednesday again! This week’s chosen artist is Kizuna from France. You can connect with Kizuna on Tumblr, Instagram, and Twitter.

Here's a little about Kizuna:

1. When did you become an X-Phile?

It was in the late 90s, I saw a picture of Mulder and Scully on my tv guide and found it very "attractive" in a way. I was curious and since I've always loved science fiction books/movies/tv shows and especially about quantum theories, time travel, ghost, parallel universes and all that mind blowing stuff, I watched it and instantly felt in love with it. The first thing I loved about the show was the duo Mulder and Scully, oddly, since I watched the show for its paranormal subjects in the first place. I felt something so unique, something I've never seen in any other shows between the two characters and that feeling never changed even now. But I admit I left the fandom some years ago and when I heard about the revival, I wasn't really interested but in March this year I watched it just out of curiosity and now I'm all in it again...

2. What is the first episode you watched?

It was "Irresistible". I remember how I was completely absorbed by it, it was so intense, extremely well-acted and really original, so different from the other shows. The only other show I know that have the same "original and unique" feeling is Breaking Bad.

3. What was your favorite part of the revival?

Hmm. I admit I'm not a big fan of the revival, especially because Mulder and Scully are now estranged and that is unacceptable and unbelievable to me. But my favourite episode is "When Mulder & Scully Meet the Were-Monster" because it's really funny. What's the deal with Alien Scully anyway? I'm really worried about what will happen to our Mulder and our immortal Alien Scully in season 11. But that's another story.

4. What inspired you to create X-Files fanart?

I think it's since I saw some movies from Studio Ghibli when I was a kid I started to love to draw. I have never stopped drawing since then and I'm still a huge fan. What I love the most is trying to give emotions through my drawings. It can be sadness, happiness, fun, love etc. I'm also a big fan of Makoto Shinkai's movies.

5. Who is your favorite character?

I love Scully. It's actually one of the reasons I loved the show so much because she wasn't the typical woman you see in every tv show. She's intelligent and very strong! She was my role model when I was growing up. But I can't love Scully without Mulder and vice versa.

Ouch just 5? It will be difficult. Not in order:

Maybe sometimes nothing happens for a reason, Mulder. - Scully - "all things"

8. How has The X-Files impacted your life?

In many many ways. So much that I really would like to know what would be the "me" who didn't know the show. It's a subject that means a lot to me for many reasons, but it's a bit too personal.
To make it short and without too many personal details, let's say that I learned English by myself because I didn't want to wait for the episodes to be translated in my language. Learning English gave me the opportunity meet some nice people (met Gillian multiple times too!), to meet some not so nice people... and all that lead me to drawing for the video game industry as a character/content designer which includes subjects such as quantum physics, matter of choices, mind blowing plot twists and all. All my passions in one.
It may sound stupid but if I hadn't watched this show then, I wouldn't be the person I am today. I don't know if it's a good or a bad thing though. I really do think everything happens for a reason, hence my favourite XF quote and some of my social media pages name: "synchronicity" leading to me being happy and honored to answer your email.
It's what I believe anyway.

Thanks, Kizuna! FanArt will be back in two weeks. See you next Wednesday with a new FanWorks!