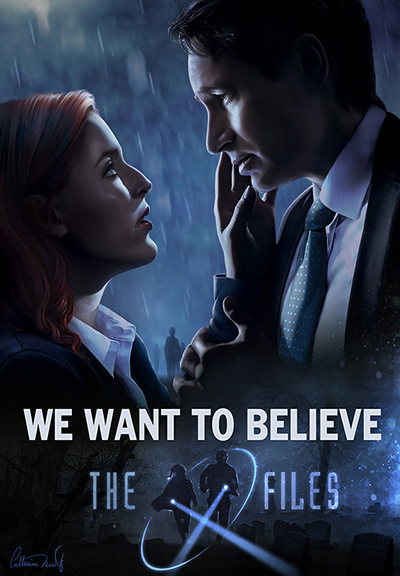 Keep reading below for more about Catherine.

When did you become an X-Phile?

I have been an X-Phile since 1993. I had missed the first episodes so I took the season one underway, but I have a very precise memory of the first episode I watched, where I was and with whom.

What is the first episode you watched?

So this was “Ice” 01x08. I remember I was staring at the screen, it was so brilliant, original, pioneering in many ways. The way of filming, the originality of the scripts, paranormal subjects rarely or never treated…

What is your favorite part of the revival?

I was so happy to see Mulder & Scully back after all these years but to be honest, I think they wanted to create the event by integrating all aspects that could usually be found in The X-Files and tried to get practically a decade into 6 episodes which is impossible. The moments Mulder and Scully reunite are ultimately rare and almost nonexistent in the last two episodes. I would have preferred that they focus more on the mythology episodes, of course I also love the stand-alones but the balance was not fair. “Mulder and Scully Meet the Were-Monster” is finally the one that reminded me most of what I liked in the old episodes.

What inspired you to create X-Files fanart?

I have to confess The X-Files is not an exception in terms of what inspires me but it is undoubtedly an integral part of it.
I am someone that could be described as paradoxical. I am most of the time cheerful and always smiling. Nevertheless you will see me express myself most of the time by drawing or painting rather mysterious things, mystic or simply melancholic, sometime maybe more lighthearted but always tinged with something “dark"or I have just explained, both in the treatment of the drawing and the subject. And thinking about it, The X-Files fulfills all the criteria that I appreciate perfectly.
Not to mention the incredible chemistry between the two protagonists which does not fail to inspire me too!

Who is your favorite character?

Scully, without hesitation. Which may seem strange because I am not at all Cartesian but rather the one who wants to believe. I am fascinated by this strong female character and obviously by the undeniable charisma of Gillian Anderson, who comes out of the usual stereotypes. Which makes for me all the difference.

There are so much episodes I appreciate, it’s not easy to make a choice! lol!

1 "Ice”
2 “Fight the Future”
3 The mythology episodes (difficult to choose one sorry).
4 “The Post-Modern Prometheus”
5 “All Things”

Mulder: “…The end of my world was unrecognizable and upside down. There was one thing that remained the same. You were my friend, and you told me the truth. Even when the world was falling apart, you were my constant. My touchstone.”
Scully: “And you are mine.”

I think this exchange summarizes their relationship in the whole series! An unshakeable faith in each other! Two beings with diametrically opposed convictions who are united to form one and balancing. The Yin & Yang ^^

How has The X-Files impacted your life?

I would tend to say: It always have been at my side. Not always in the foreground at some points of my life but always in a small place of my heart and my mind. I never forget it! How could I forget The X-Files which in part has contributed to influencing and build my own artistic universe? No, I have to say it has a place of choice among other countless things.
We must not forget it was the precursor of a lot of what we can watch today on television. It’s really a reference and an inspiration and I have always been intrigued, interested by the paranormal.

It also reminds me of some memories of my youth (laugh), I am not old but I have more than twice twenty years. The advantages today are social networks to make chance encounters or to share a common love for something. Season 10 gave me this opportunity to meet some people who will recognize themselves, who have become good friends or follow with careful attention the careers of those have made us vibrate and still.

Thanks, Catherine! Stay tuned for a new FanWorks author next week.